Look for Bowden to be selected in NFL draft 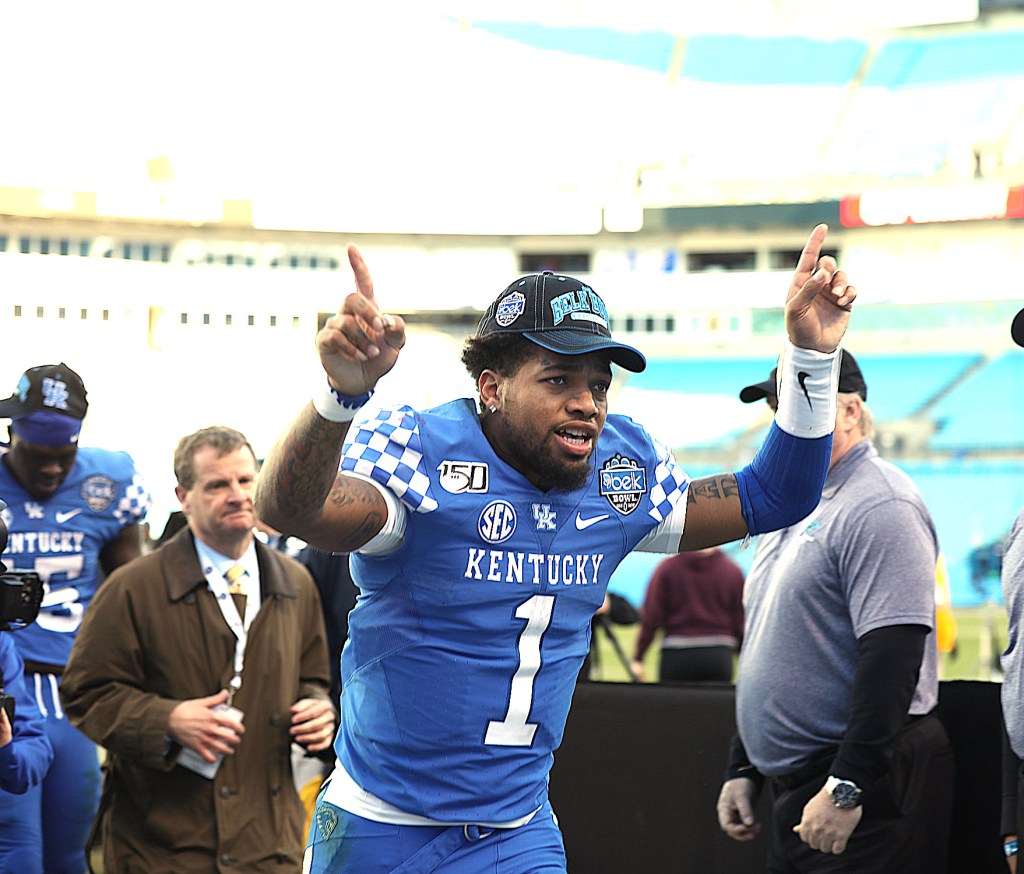 Lynn Bowden Jr. celebrates after leading Kentucky to a win in the Belk Bowl. He is expected to be selected in the upcoming NFL Draft. (Vicky Graff Photo)

Long-time  NFL draft guru Gil Brandt has Bowden ranked 44th on his list of the top 150 draft prospects, which means based on talent Bowden should easily be one of the top 60 picks in the first two rounds. However, teams also draft based on needs and the draft that starts Thursday is loaded with receivers.

Kentucky recruiting coordinator Vince Marrow has his own draft projection for UK’s star who moved from receiver to quarterback to save the 2019 season for UK.

“I have been talking to teams every day,” Marrow said. “He definitely will go no later than the third round but I am saying the middle of round two based on what NFL guys are saying to me.”

Bowden was the only player in the FBS to lead his team in both rushing (1,235 yards with 11 touchdowns) and receiving (30 catches for 348 yards with one score) last season. He had eight kickoff returns  for 200 yards and four punt returns for 53 yards. Don’t forget he also threw for 330 yards and two touchdowns, including the game-winner in the Belk Bowl.

Bowden won the Paul Hornung Award given to the nation’s most versatile college player after leading the SEC and ranking eighth nationally in all-purpose yards — not counting passing — with 153 per game. He broke the SEC single-game record for quarterback rushing yards with 284 in a 45-13 romp over Louisville.

Yet the most impressive stat to me was that he led the SEC in third down rushing yards with 404 yards on 44 carries, an average of 9.18 yards per run. After Bowden took over at quarterback, UK seldom passed no  matter down and distance. For him to get 400 yards on third down runs when opposing teams knew he likely would have the ball was remarkable and should show NFL personnel his toughness and will to win.

Bowden did attend the NFL combine in Indianapolis in February and got to talk to about 15 teams in person. He weighed 204 pounds, a number NFL scouts liked, and bench pressed 225 pounds 13 times. He did not participate in other events.

Bowden was compared by some NFL scouts to former Pittsburgh receiver Antwan Randel El, a quarterback at Indiana in college. But don’t forget Bowden did have 67 catches for 745 yards and five scores in 2018 in an offense that featured the running of Benny Snell.

Most Kentucky fans prefer to compare Bowden to former Wildcat Randall Cobb, a 2011 second-round draft pick by Green Bay. He’s played in 120 NFL games with 525 receptions for 6,352 yards and 44 touchdowns. Cobb played eight seasons for Green Bay before signing with Dallas in 2019 when he had 55 catches for 828 yards and three scores. He signed with Houston as a free agent in the offseason.

Late in UK’s season I asked Bowden about the comparison to Cobb, who played both quarterback, receiver and returner at UK. It was a comparison Bowden embraced.

“I think that’s fair because of the versatility he has just like I do,” Bowden said. “We went through a lot of the same changes and things here. He probably played more quarterback than me but to be compared to him is pretty great. I watched him play and have heard a lot of stories about him.”

Now Bowden is ready to make his mark in the NFL and hopes he can continue to be like Cobb and eight to 10 years from now have other players “grateful” to be compared to him.

Montgomery leaves for good this time, declares for the…