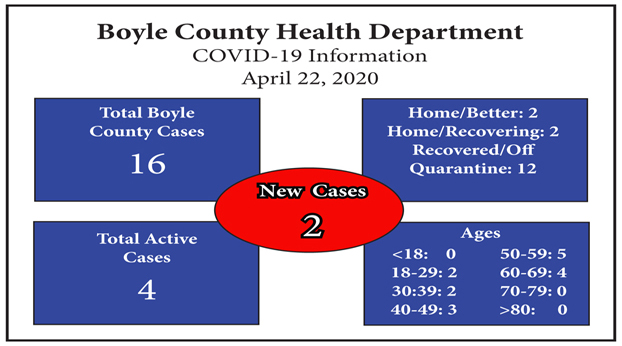 Two new cases of COVID-19 were reported by the Boyle County Health Department Wednesday afternoon. According to the daily update from the department, that raises the total of local cases to 16. Of those cases, four are active and 12 are now listed as recovered/off quarantine. Wednesday’s new cases were both tested at Ephraim McDowell Health, according to a releaese from EMH, which stated that both are Boyle County residents who are self-quarantining at home.

In his daily address, Gov. Andy Beshear announced on Wednesday that an expanded testing program for the coronavirus will soon be available and that it will be available to anyone.

Up until now, it was only available to health care workers, first responders, those 65 and older, people with chronic health conditions and those with symptoms. “We will now test anybody who wants a test,” the governor said during his daily press briefing.  “We are able now to open our testing to the general public.”

For the first time, drive-thru testing in the state’s partnership with Kroger will take place starting next Monday in the African-American neighborhoods of Louisville and Lexington.  “We have seen the disproportionate impact, especially in the death rate of this virus.”

He says the testing capacity will be 1,500 per week at each of the two locations, and will be done for two weeks, with an additional service. “We are going to be providing a mask, we’ll have about 5,000 we will be able to hand out on Monday, as well as hand sanitizer.”

Testing will also begin next week in Owensboro and Bowling Green, which will run Tuesday through Thursday, with a goal of 1,000 kits in each city.

In addition, one Walgreen’s in Lexington will start testing on Friday, but will operate under the old rules, and only be available to those at risk or who have symptoms.

Wednesday also saw a higher number of new cases reported than in the past three days with 196, which brings the total to at least 3,373.

There were also 14 more deaths due to the corona virus, making the pandemic total 185 in Kentucky. Of the latest deaths, six were from Jefferson County, two from Kenton County, and one each from Boyd, Campbell, Fayette, Grant, Graves, and Hopkins counties.

He also noted the numbers mean the state is very close to a consensus and agreement of putting out guidelines for the gradual re-opening of non-emergency hospital and other healthcare services, starting next Monday.

“Phase one will re-start diagnostic radiology, non-emergent in-person and office ambulatory visits,” he said. “We believe that is the right place to start as we begin to ramp up.  We’re also going to allow pre-anesthesia testing services to re-start, in preparation for the surgical ramp up.”

He said they hope to announce weekly more expansions of services and to eventually get to elective procedures.

“We’re going to wait at least until May 4, which is the time we’re going to have everyone back in the Senate and clearly weigh before we provide assistance to states and local governments, who would love for us to borrow money from future generations, to make sure that they have no revenue losses.“

McConnell added, “Before we make that decision, we’re going to weigh the impact of what we’ve already added to the national debt and make sure that if we provide additional assistance for state and local governments, it’s only for coronavirus-related matters.”

Beshear said every state in the country is going to be in desperate need of federal aid.

“And if the federal government does not provide that aid, it will further exacerbate the recession that we are in.  It will make re-starting the economy that much more difficult. It’ll create additional hardships.  We absolutely need that help, otherwise the current fiscal year is going to be a real problem.”

Kentucky Today contributed to this report.