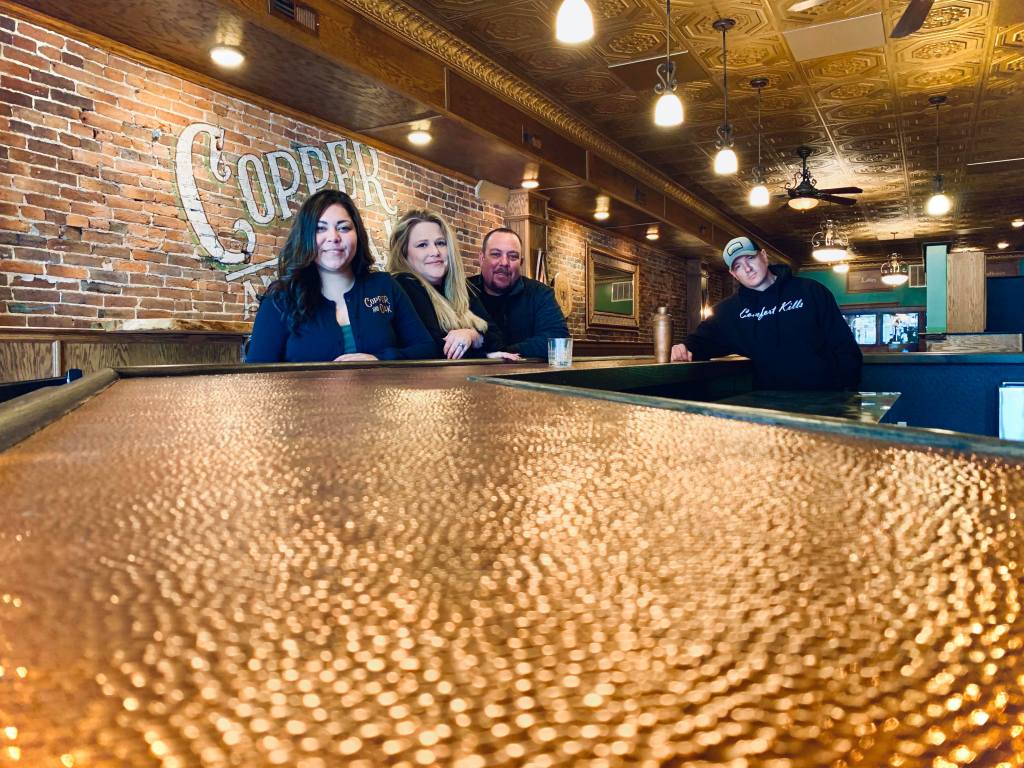 The Copper & Oak management team poses inside its custom-renovated restaurant at 303 W. Main St. They are, from left: Lahannah Bonagofski, front of house manager; Nicole and Beau Cacciatore, co-owners and beef farmers; with Randy Vest, co-owner and bar manager. The new burger joint will offer locally raised beef and other items, as well as a lengthy list of bourbons, wines and other spirits. 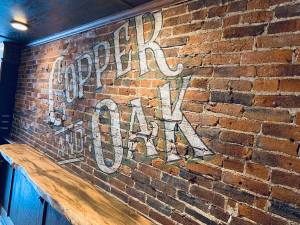 The owners of Copper & Oak, a craft burger and bourbon restaurant opening on Main Street, say it was important to keep as much of the work done locally as possible. Kirby Stafford of Kirby’s Signs hand-created a logo mural on an exposed-brick wall, a Kentucky Bourbon Trail “you’re here” sign, as well as the restaurant’s sign hanging outside on the window.

Soon, Danville will have an eatery that a trio of owners thinks has been a longtime coming — a craft burger and bourbon bar. Copper & Oak is shooting for a May opening, pending what happens with the COVID-19 pandemic, in the old Cue restaurant location, at 303 W. Main St.

Although the space already had copper ceilings and oak floors, it was completely renovated, with an all-new custom-made decor, including lights, tables, swanky New York-style booths, an 18-seat copper bar and a kitchen that’s been doubled in size.

Co-owners Beau and Nicole Cacciatore and Randy Vest met recently to offer a sneak-peek of the burger and bourbon joint now that they’ve taken the white paper down from the windows, which many passers-by could be seen peering through in curiosity. The restaurant is a concept the Cacciatores have been working on for about two years, but were able to completely renovate the space — leased from Mike Perros — in about two months.

“All the bigger metropolitan areas have had craft burger joints …” Beau says. And with Danville’s location on the Kentucky Bourbon Trail, due to being the home of Wilderness Trail Distillery, they thought now was the time to bring their ideas to reality.

It will have an extensive bourbon list, eventually up to around 50 different ones, as well as a wine list — due to the help of Beau’s dad, a wine industry veteran — and a full bar.

They worked closely with the executive chef, Darrin Duff, to design a menu that fits the size of the galley kitchen but is still high in quality, Beau says. He says Darrin was previously at Bluebird Cafe in Stanford, as well as having worked at some high-end places in Lexington.

Randy says they had an idea of what they wanted the menu to be anway, but Darrin took that and “ran with it, made it better.”

The menu will include a charcuterie board and several small plates, for those wanting a few drinks and to pick at something rather than a full meal. There are various entrees and — of course — craft burgers, like the C&O special, with white cheddar, house-made bourbon glaze, red onion and garlic aioli. Randy shows how the buns will even be branded with the C&O logo, just for that added touch.

And as far as bourbon, Beau says not to worry; the list won’t cater to a certain taste pallet or price point — “we’ll have everything from Jim Beam to Pappy Van Winkle.”

Beau says Farmhouse Restaurant, which the Cacciatores own and run in Parksville, is known for its burgers. “The freshness, the quality, everything … Danville needed something like this.”

Beau and Nicole raise all the beef they use at their Twin Creeks Farm, about 15 minutes down the road from Farmhouse.

The menu will also offer things like steak frites — steak and fries, and poutine, which Nicole insisted on serving and can’t wait for people to try; a popular dish of french fries with cheese curds topped with gravy, originating in Canada but served all over the world.

“We’ve invested a lot of hard work and a lot of money to do this, so we’re excited …” says Beau. “We put together an awesome team.”

Lahannah Bonagofski, the front-house manager, says she’s specifically excited for the garlic aioli on the menu, as well as when they can get Sunday brunch kicked off eventually, serving mimosas and bellinis.

“And our portobello burger, for a vegetarian option,” Lahannah says, about one of her favorite items. “Even carnivores are going to love it, watch.”

And for Beau, he says the two-month remodel was very important to him, not only to create an inviting, laid-back atmosphere for those wanting a drink after dinner, but to turn it all into a more functionable space.

Everything inside the bar is custom-made, from the new design and woodworking — done by Bruce Williams of Williams Vintage Woodworks in Stanford — to the logo and various signs, by local artist and owner of Kirby’s Signs, Kirby Stafford. There’s even a standing bar made of sycamore from the Cacciatores’ farm.

They say Williams was able to take all three of their ideas to make a new, loung-like, cohesive space, complete with copper lighting effects. They were also able to come up with a barrel rick design to block off the double-entry way of the restroom area, which helps with traffic flow in the rear of the restaurant.

And Stafford used his talents to help them with a logo, painted in a vintage slant on an exposed brick wall, giving the bar a speakeasy feel, as well as a “you’re here” Kentucky Bourbon Trail mural concept in the dining area. Randy says he had the idea of the state outline and something with the trail, “and Kirby just ran with the rest. We love it.”

Barrels and materials, like staves, completed the look to tie the decor together, purchased from WTD, which the owners say have been generous to them, becoming like collaborators, with co-owner Dr. Pat Heist suggesting some Prohibition-era bourbon drinks to offer. Randy says they plan to cross-promote with WTD and other distilleries, which could be lucrative since the trail expects around 150,000 visitors when it’s back up and running.

And as not only a restauranteur but a beef operation owner, Beau says “keeping it local” is something they’re incredibly passionate about, and why their own businesses have survived. “We sourced as much as we could to all local people, trying to keep the money in Danville and the immediate, surrounding areas,” Beau says. “Now, if we can just get it opened.”

“We were supposed to open last week,” Nicole says, referring to the original plan of opening the first week in April; and they were on target. But, they slowed down a bit due to the social distance restrictions put into place due to the coronavirus.

COVID-19 has been frustrating for business owners, the Cacciatores say, and everyone is feeling it. But, the demand for local beef seems to have increased, and Twin Creeks will be taking care of its restaurants, family and friends first with orders for the time-being, working with only a select few other businesses to provide beef.

But they want to make sure when they finally do get Copper & Ook open, it’s done safely and within guidelines; they will not be up and running at full capacity right off the bat.

“I would say we’ll probably be at ⅓ capacity …” Nicole guesses, based on what their seating limit is. There’s much to figure out still, they all say, but they feel they have the perfect team in place to do it.

Nicole says there are 23 on staff now, but she’s due to hire about three more; they’re hoping to hit close to 30 new jobs created when it’s all said and done.

Beau says service is more important than what you’re serving. “… You can have mediocre food and great service, you’ll be packed. If you’ve got great food, too, people will be waiting to get in.”

Which is what the team plans on. There’s a sitting area at the front, soon to be framed by draped windows, just inside the door, which allows patrons to grab a drink and talk while they wait.

Nicole hopes to be approved for two additional sidewalk tables, as well, when things are back to normal.

And, the team already plans to use that same cross-promotional attitude it plans with distilleries, with other local eateries in Danville. Randy says for a good barbecue restaurant, they’ll point people to Harvey’s. Someone wants great pizza; go to Bluegrass Pizza & Pub.

“And then, hopefully people will want to come over here, after dinner, for a drink. We’re good with that.”

Beau says as of now, the public opening of Copper & Oak is planned for May 20, with an opening time of 11 a.m. Wednesdays through Sundays.