A man was arrested Wednesday afternoon after running from police and trying to dispose of narcotics.

As Danville police were on a routine patrol in the area of North Fourth Street at about 3:40 p.m. Wednesday, Officer Ben Ray got behind a silver pickup truck, according to a police news release. Near the intersection of Earl Street and Old Shakertown Road, the truck began to slow and the passenger jumped out and began to flee the area.

Officer Cody Crawford saw the male suspect running and attempted to stop him but he continued fleeing behind houses near North Third Street, jumping fences and going through backyards, according to the release. The suspend circled back around to the area of North Fourth and High streets where police found him and apprehended him without further incident by Officer David Lewis.

The suspect was identified as Tyson T. Perrin, 23, of Danville. After speaking with witnesses and searching the area, officers located a discarded baggie of suspected methamphetamine that Perrin had allegedly attempted to destroy during the foot pursuit.

Perrin was arrested and charged with first-degree fleeing or evading police on foot; tampering with physical evidence; and possession of a controlled substance. He was taken to the Boyle County Detention Center. Thursday afternoon he was not listed as an inmate. 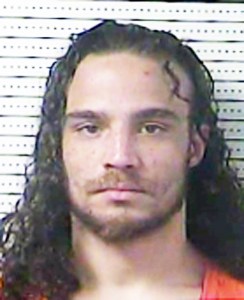 The driver of the truck was stopped by police during the incident and was identified as Jacody Deerwester, 26, also of Danville. Deerwester was taken into custody on an unrelated arrest warrant for contempt of court.

On Thursday afternoon he was being held at the jail without bond.

A Lincoln County man was injured early Monday morning after leading law enforcement officers into three counties on a high speed chase which ended when the suspect crashed into two cruisers and injured a Boyle Sheriff’s Deputy.

James Pevley, 37, of Lincoln County, was admitted to Ephraim McDowell Regional Medical Center due to injuries he sustained after crashing head on into Deputy T.J. Wren’s cruiser on U.S. 127 near Junction City. On Tuesday morning, Boyle Sheriff Derek Robbins said Pevley will be arrested once he is released from the hospital. Robbins also said the pursuit ran from Garrard County, into Boyle then Lincoln County, and ended back in Boyle.

According to a news release from the sheriff’s office, at 1:37 a.m., Boyle deputies were requested by the Garrard County Police Department to help one of their officers who was in pursuit of a vehicle.

Boyle deputies intercepted the pursuit in the Junction City area as Pevely’s vehicle was traveling at a high rate of speed on Old Hustonville Road. He continued toward U.S. 127 and crossed the highway where Wren had stopped traffic for the safety of the public, according to the release.

Pevely’s vehicle crossed U.S. 127, drove into a ditch then went back up onto the highway.

Deputies forced the fleeing vehicle to top in the grass just off the road. The driver of the vehicle refused to exit the vehicle and after a brief scuffle, officers were able to take Pevley into custody.

Garrard County is leading the case and charges are pending. Boyle Sheriff’s Office will also be charging Pevley, Robbins said.

As of Thursday night, Pevley was not yet listed as an inmate in the local jail.

A Harrodsburg man was arrested Sunday night after fleeing from Boyle County Sheriff’s deputies and crashing into one of their cruisers.

Detrick Shaw, 43, of Harrodsburg, was identified as the driver of a suspicious vehicle complaint, which was reported to have been stuck in the mud in the middle of a field on Gentry Lane at about 9:16 p.m. Sunday, according to a news release from the Boyle County Sheriff’s Office.

A deputy located a vehicle on Locklin Lane which matched the suspicious vehicle description, and attempted to stop the driver. After a short distance, the vehicle stopped, but as an officer approached the front of the vehicle, Shaw allegedly quickly drove ahead, nearly striking the officer, who had to dive into his vehicle to avoid being run over, according to the release.

The vehicle continued fleeing from officers, and continued west on Perryville Road and into Washington County. Shaw turned his vehicle into a residential driveway and when deputies tried to get the suspect out of the car, he put his vehicle in reverse, and backed into an officer’s cruiser, the release read.

Officers were able to get the suspect out of the truck and during a scuffle, Shaw allegedly tried to take a taser out of a deputy’s hands, but was unsuccessful. Shaw was taken into custody after he was tased by officers.

As of Tuesday morning, Shaw was being held in the Boyle County Detention Center on a $10,000 cash bond.