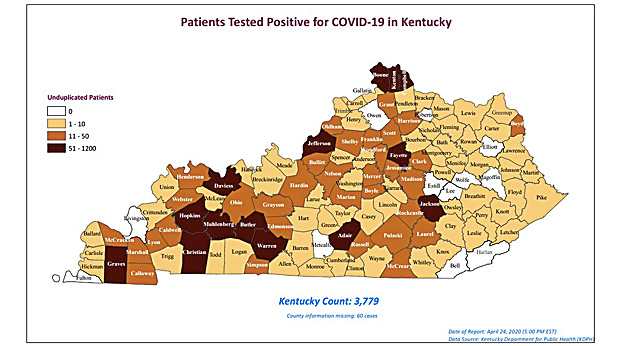 FRANKFORT, Ky. (KT) – Kentucky set a single-day record for cases of the coronavirus on Friday with 322 cases reported to state health officials bringing the total to 3,779. In addition, there were nine more deaths, making it 200 since the start of the pandemic. Three of the victims were from Graves County, two from Hopkins County and one each from Adair, Jackson, Muhlenberg and Shelby counties. During his daily press briefing, Gov. Andy Beshear announced the release of 352 more state prisoners, convicted of non-violent and non-sexual crimes who are being housed in county jails, who are nearing the end of their sentences and are at risk of contracting COVID-19. “This is not something that we take lightly, but we know this virus can get in these facilities and we’re taking similar actions that we see other governors all over the United State are doing,” he said. “Three-hundred-thirty-nine of those were state inmates serving their sentences in local jails and they have medical conditions that that the CDC has identified as putting them at real significant risk.” As with the first group of inmates released, Beshear says all inmates will be checked for the coronavirus, so they can’t take it into the community.  “They must have a verifiable address so they can be self-quarantine for 14 days after their release, and they cannot commit any other crimes during the period of release.” Josh Benton with the Education and Workforce Development Cabinet updated some of the unemployment numbers, due to the pandemic. “Since March 16, which is our baseline date for when we started seeing a spike in claims, we’ve processed over 550,000 claims,” he said.  “Since that time, we are approaching paying out over $1 billion in unemployment insurance claims.  That comes from our traditional program, and the four new programs that were provided by the CARES Act and are being paid for by the federal government.” He said over the last two weeks, they have processed around 300,000 claims per week, and acknowledged they are still having problems processing some claims and are still working hard to solve those issues.  “I am hopeful next week we are going to be able to provide some really good news to those individuals who have been waiting far too long.” Benton noted they have made big strides in their telephone system. “Two weeks ago, we were able to answer 1,200 calls. This week we’ve been averaging over 50,000 calls a day answered.” He added those whose payments have been delayed will eventually get caught up, even if they find a new job in the meantime. Long-term care facilities such as nursing homes, is where the virus continues to cause the maximum level of devastation, Beshear said.  “Since Thursday, 48 additional residents have tested positive, 17 staff members, and five additional deaths.  61 different facilities have now seen a positive case.” That brings the pandemic totals to 578 residents, 268 staff and 91 deaths, all but one was among residents. Beshear also announced that there will be 11 drive-thru testing sites available next week: two each in Louisville and Lexington, and one each in Hopkinsville, Cadiz, Murray, Hazard, Mt. Vernon, Owensboro and Bowling Green and hinted that there may even be more announced next week. For the latest information on the coronavirus pandemic in Kentucky, drive-thru testing locations, guidance from state and federal health officials, and restrictions that are in place, go to the website, http://kycovid19.ky.gov/. Those without internet access or who may need more information and guidance can call the hotline at (800) 722-5725.