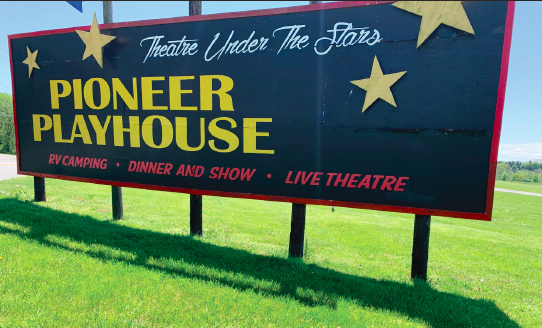 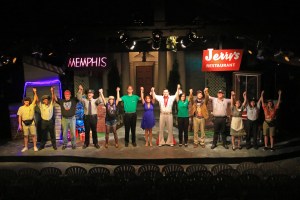 From Pioneer Playhouse’s 2019 season, the curtain call is seen for the production of “Breaking Up With Elvis.” (Photo by Kirk Schlea)

Dateline NBC is shining a spotlight on Danville’s Pioneer Playhouse through its Postcard from the Field series.

Robby Henson, artistic director at Pioneer Playhouse, said he received a call out of the blue from the popular television program’s producers in February as they were looking for a soundstage in central Kentucky to record footage for an upcoming show. He said they decided to make their indoor theater available for the television crew.

“They said they were surprised at the prices for a soundstage in Lexington,” Robby said. “It was higher than in New York City, and we were very cost-effective.”

Upon coming to Pioneer Playhouse, Robby said the Dateline producer was great to work with and seemed to be genuinely impressed with their “grassroots pioneer theater quirkiness.” That’s when the producer asked about making Pioneer Playhouse a part of the Postcard from the Field series, a web series where the Dateline crew shines a spotlight on unique places and people that they encounter across the country.

Heather Henson, managing director at Pioneer Playhouse, said it was a great experience and that the television crew was great to work with and very interested in the history of Pioneer Playhouse and the community.

“They’d found our website and thought it would be nice to film at a local theater because they always try to support local when they come to a town,” she said. “The whole crew was just really friendly and interested in talking to us about the history of the Playhouse, and then we met Keith Morrison (he came in after everything had been set up), and he was just just a really nice guy — gracious, personable. He was fascinated by the story of Raintree County being shot in Danville and he enjoyed looking at the photos we have on exhibit of the making of the movie.”

The Dateline producers planned to return in March to record around the theater, but things changed as the COVID-19 pandemic limited travel and social interaction, so Robby said the producers asked he and Heather to record some footage and an interview as well. Robby said they uploaded the footage to Dateline’s dropbox and “the editors did the rest.”

So far, the promotion has been great, Robby said. Since Dateline published the video on Thursday, more than 50,000 people have viewed it online.

“We are very thankful to Liz (the Dateline producer) and Dateline for including us,” Robby said. “Everyone was so nice, including the host Keith Morrison.”

Heather added that she typically had not watched Dateline, so she and Robby were not certain what to expect.

“I’m actually not a Dateline NBC watcher,” Heather said. “Just something I’ve never really paid attention to. So at first, I’m not sure Robby and I knew how big a deal it was that Dateline was there and how many fans of Keith Morrison there are. We’ve worked with film and TV people lots before, and it’s always a mixed bag.  Some are nice; some are less nice.  But the Dateline folks were extremely nice and respectful and interested in the Playhouse and in Danville.  I think they ate lunch in town. Keith Morrison had this great sparkle in his eye and jokey way of talking.  He instantly put me at ease.”

Heather said that they were glad that Dateline chose to spotlight them because they fully believe in the uniqueness and rich history of Pioneer Playhouse.

“Robby and I do think Pioneer Playhouse is unique in Kentucky, unique in the whole United States,” Heather said. “We love when strangers discover our history, and want to share it with others. And of course, during these dark times, it was a ray of light to have some national attention focused on our dad’s legacy — Pioneer Playhouse.”