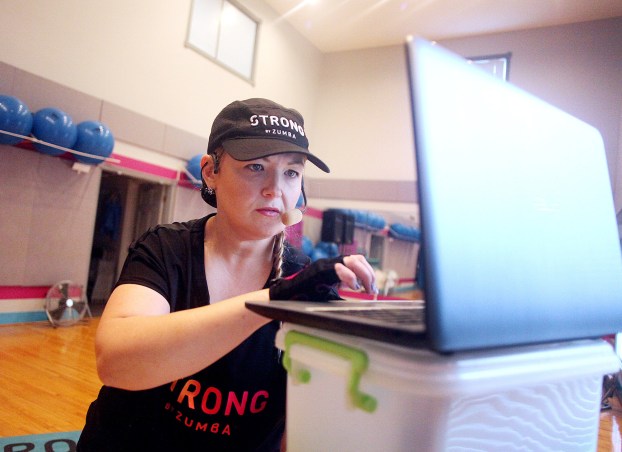 Deanna Charles prepares to start an online workout class from the Bunny Davis Complex in Danville through the Danville-Boyle County Parks and Recreation Department. The online classes are free to anyone who wants to participate. (Jeff Moreland Photo) 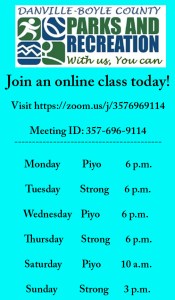 Determination is key for people who work out and take care of their bodies, and Deanna Charles has been very determined during the ongoing COVID-19 pandemic. In addition to taking care of herself, she is also an instructor, helping other people do the same for themselves at the William E. “Bunny” Davis Recreation Complex.

When the pandemic forced her to make changes to the classes she taught at the complex, Charles knew she wanted to keep helping those in search of a workout.

She said she found out on a Monday that the complex would be closed due to the pandemic, and she wouldn’t be able to teach her class the next day, which made her feel “a little bit panicky.”

“Working out is my stress relief, and one of the ways I’ve lost so much weight, so I was scared. I immediately started thinking of ways we could continue to work out,” she said.

At first, Charles called Image Fitness in Harrodsburg to ask about having classes there, but she said the gym had received word that it would also be shutting down later that week.

“The first few days, a couple of the Bunny Davis regulars got together at the park pavilions or in a garage if it rained in order to get our workout. Then that first weekend I found out that STRONG was going to allow us to stream our classes online as long as it was live and not recorded,” she said.

STRONG is a high-intensity interval training with perfectly synced music produced specifically for the class. The program has a lot of martial arts moves, such as kicks and punches, as well as a push-up challenge and a leg challenge at the beginning, and a core workout at the end, Charles explained.

She said once she knew the online classes were approved, she began to plan streaming them in order to practice social distancing.

“I already had a laptop and an external speaker, so I just ordered a microphone and a couple of adaptors to make it all work. I’m not super tech savvy, so it’s been a learning experience for sure,” Charles said.

When weather permits, classes are conducted outdoors, but if it’s cold or raining, Charles said they meet in the aerobics room at the center.

“The only people who are allowed to come are people employed by the parks and rec department as instructors,” Charles said. “If it’s nice out we go to the tennis courts at Bunny Davis, and John has marked off spots with chalk to keep us 10 feet apart during our workout.”

She added that the group is made up of no more than 10 people including instructors, and others must take part with the online option.

“Everyone has done really well with keeping their distance during our classes and they’ve been so grateful to have these workouts,” she said.

Charles isn’t alone in her efforts to take fitness to people staying safe at home. Jenni Goggin and Rita Zirnheld Anderson also teach classes at the Bunny Davis Center. Goggin has taught for more than 10 years, and Zirnheld Anderson has more than 25 years of experience as a teacher, and she now substitutes in addition to working out regularly.

Goggin has been doing online versions of a program called Piyo. Charles said Goggin had been teaching the class in person twice each week, as well as a Pilates-type class once a week. Goggin and Zirnheld Anderson both join Charles in offering online classes.

“I love the idea of having remote live classes during the pandemic. I have done both the remote classes online and the outside tennis court classes,” said Zirnheld Anderson. “It is so nice to see my workout buddies. Many of us are ‘die hards’ and are used to seeing each other three or four days a week.”

She added that Charles and Goggin have done a great job of keeping people connected and healthy during workouts.

Charles said she originally considered charging a fee for the classes because Zumba, the company that owns the STRONG program, requires monthly payments for certification. She said there are also added costs with streaming, such as paying for Zoom, the portal used to allow people to join the workouts from home.

Just before the park pavilions were closed, Charles said Danville-Boyle County Parks and Recreation Director John Bell learned they had been streaming the classes and decided to pay for them so the public would have access at no charge.

“I am thankful for John Bell and Deanna,” Goggin said. “John has supported Deanna and I, and has allowed us to continue to conduct these classes and use the facilities to Zoom. Deanna has not only taken care of all the technology, but has also helped organize and lead the classes.”

Both Charles and Goggin say they prefer in-person classes, but they are also glad to be able to provide an option during the unique situation they now face.

“With regard to the challenges of virtual fitness classes I would say the biggest challenge is assuring that the technology will work.  Sometimes it is the wifi connection, sometimes it is the speaker and/or microphone not connecting to the computer, and sometimes you get kicked out of Zoom for no reason at all,” Goggin said. “There is also a lost sense of camaraderie when you don’t get to physically work out with people you work out with on a regular basis. It is easier to stay motivated and challenged when you have the physical presence of others.”

Charles agreed, and said it is more difficult when she can’t see people and offer suggestions on form and other parts of the workout.

“I definitely prefer in-person class because I can pay attention to what people are doing, and it helps me know if we need to slow it down to level 1 or pick up the intensity to level 3,” Charles said. “We always try to tell people the proper form for the moves, even if it’s just an online class, but it’s easier to do with an in person class.”

Still, a workout through a virtual meeting is better than no workout at all, and Goggin said there are some people participating who didn’t attend classes in person before.

“We have had several people join our classes that didn’t previously. Providing these classes supports the virtual trend for on-line fitness training at home,” Goggin said. “Who knows, this could be the new norm where current members and new members have the opportunity to participate in our classes no matter where they are.”

Charles said when things get back to normal and the Bunny Davis Complex can open again, she doubts STRONG will allow them to continue offering the streaming option, but she thinks some who have tried the online classes for the first time may come in person when the pandemic is over and the gym opens again.

Click on this blue bar when you receive the daily email newsletter to access comics, puzzles and games you can... read more