City votes to spend $74,000 for firm to examine emergency services 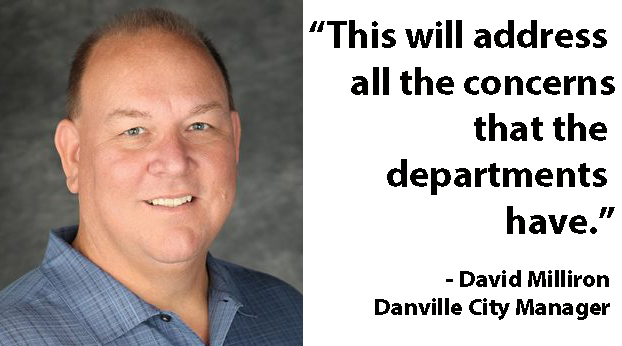 The Danville City Commission has unanimously approved the hiring of a consulting firm at a cost of approximately $74,000.

The Center for Public Safety Management, a Washington, D.C., based organization, will begin in early May to examine the city’s emergency services and “provide a game plan” for how to address concerns mainly within the city’s police and fire departments, according to Danville City Manager David Milliron. He said the project could begin in early May.

The group, Milliron said, will come in and interview “top down,” spending time with each group involved over a 120-day period. The group will also analyze 911 data and look at each department’s structure as well as performance indicators.

“It’s the deepest dive into an agency that you can get,” Milliron said.

Milliron mentioned that the fire department is on the verge of going out and recruiting a new fire chief, and this move will help address some of the concerns that leaders are hearing from the departments.

“What we continue to hear is that there are staffing issues, they’re overworked, overburdened, the call volume is through the roof and they’re having difficulty recruiting,” Milliron said. “What we want to make sure before we just throw additional resources at it… we want to have an independent voice come in, a panel that will take roughly 120 days to do a deep dive… to find out if we are appropriately staffed, are there changes we can make in our structure or organization to make us more efficient and make it a better department.”

Milliron said he reached out to each department seeking input and they approved of the move, if the city commission was in favor of it.

“This will address all the concerns that the departments have,” Milliron said. “If I was a police officer, firefighter or dispatcher, what you get out of this independent study is your roadmap for the future for success.”

Commissioner James Atkins voiced some concerns about the plan.

“One of my hesitations is that it’s a consultant and we’ve been dealing with consultants and the fallout from consultants for many years,” Atkins said.

Milliron said he understood Atkins’ concern but believes that this particular consultation will be beneficial for the city’s emergency services and put them on an upward trajectory.

“Ultimately, you’re right,” Milliron said. “Consultants can be good and they can be bad… So in order to set that department on a trajectory for getting back to where everyone in that department says they want to be, which is a city of firsts… They tell me of the days when everyone wanted to come work for Danville, when we were the top lead agency, and that’s where we want to get to.”

Atkins also expressed concern about much of the study being done remotely due to the COVID-19 pandemic. Milliron said the group has some guidelines where, instead of sending a small team like they traditionally do, they would only send one person who would then report back to the group. However, that situation is fluid as the state begins moving through phases of reopening and lifting restrictions.

City Commissioner Denise Terry raised concerns about spending for the study when the city will likely have to make budget cuts due to economic hardship from the pandemic.

“I’m not against this, I just think the timing is really bad,” Terry said.

“I think your comments are well-taken, but I think the timing is absolutely right on mark,” Milliron responded. “We will have to look at cuts and our department heads are going to be part of that and they are going to have to have the best tools and resources at their fingertips on how to streamline their staffing, departments, purchases, everything… We are all looking for the tools and resources and I doubt very much that if the fire chief, police chief, or 911 director thought that it wasn’t the appropriate time to spend it, the city manager wouldn’t be here asking for it.”

The funds will come out of the general fund budget, from the legislative/executive section. Milliron said the city’s finance officer confirmed to him that there are sufficient funds in the professional services line item for the proposal.

Danville Mayor Mike Perros said he understood Terry’s concern, but he also had concerns about delaying the study.

“I do understand the concern of expenditure of funds,” Perros said. “But I don’t think this environment that we are in right now is going to present relief in our budget for some time to come. I would hate to put this off for that period of time. I really do want our police and fire department to be the place that professionals want to come and be employed.”

City Commissioner Kevin Caudill said issues have existed before Perros took office as mayor and he believes this could be beneficial.

“This has been an issue for a long time, even pre-dating Mayor Perros really,” Caudill said. “I think prior commissions, with the best intentions, have tried to address it, but it has been more like throwing spaghetti at the wall or treating the wound instead of dealing with the cause. I don’t know, I think this is probably a good idea. I have the same concerns as Commissioner Terry with the budget and the timing, but I think the point is well-taken that maybe this is the best time.”

Danville Police Chief Tony Gray spoke to Milliron about his concern with the police department being a training department.

“We should not be in a situation where we are training at a great expense, roughly about $50,000 into training, and then have someone leave us and go elsewhere,” Milliron said. “We want to be the top-notch department.”

Perros said concerns within the police department have been around from the beginning of his tenure.

“I’m in my fifth year, as you all know well, and I can tell you from day one the concerns of the police department have been made to me, and I think this is a great step forward to get down to what the concerns are, what the obstacles are, and what we need to correct or rearrange in order to become that place,” Perros said. “I would love after the next three years to leave this position, as David said, where people are lined up wanting to be on our fire department or our police department.”

Gray said the department looked at something similar to this nearly 10 years ago.