(Editor’s note: Information in this article came from The Advocate archives and Find-A-Grave site.) 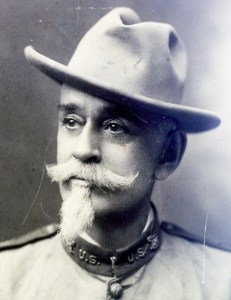 He served from 1861 to 1904 beginning with the Union Army during the Civil War, and went on to be in Indian Campaigns and Spanish American War.

Jacobs and five other Army officers who had distinguished themselves in campaigns against the Indians and were entitled to recognition by Congress and receive brevet rank.

Regiment records and reports of several engagements were investigated and showed the men were entitled for the recognition.

A Washington correspondent wrote, “It was somewhat a remarkable fact that names of six of the 150 officers, including Jacobs, an assistant quartermaster, who were thought entitled to this distinction were sent to the Senate.”

The honor was to recognize Lieutenant Jacobs, “the brevet of captain from February 27, 1890, for gallant and meritorious services in reconnaissance and action against Indians at Big Hole, Montana, August 8-9,1877.”

Jacobs rendered signal service on August 9, 1977, and was granted a brevet for the service on that day, but “declined it upon grounds saying that what he did on the day of the battle was nothing more than his duty as a soldier and worthy of no special mark or distinction.”

The law of “Congress authorizes brevets to be conferred for gallantry ‘in action’ only.’”

Technically, Jacobs was not entitled to the honor, although the service he performed was much greater than if he had merely commanded his troops in the engagement.

However, the Army secretary of war said what Jacobs performed was much greater than if he had merely commanded his troop in the engagement.

“Creeping through the underbrush, Jacobs climbed a tree on the outskirts of the Indian camp and made an exact map of it, which General Gibbon used August 9 when he made an attack and captured the hostiles.

“Without the map the attack might not have been successful.

“To confer the honor which was richly deserved by Jacobs, the secretary of war stretched the law and made the brevet read for gallant and meritorious service Aug. 8 and 9.”

Since he was not involved in the event on August 9, and not entitled for the honor, Jacob declined the recognition.

Jacobs was born and reared in Danville and was 18 when he decided to enlist in the Union Army during the Civil War.

His father was a strong supporter of the Union cause. When he asked his father’s permission to enlist, his father refused, saying he was too young and a freshman at Centre College.

But Jacobs was not deterred. After he said he would run away from home and join the Confederates, his father granted him permission.

Jacobs enlisted in the 4th Kentucky Volunteer Infantry (General Fry’s regiment), rising to rank of major before the close of the Civil War.

He was appointed second lieutenant in the regular Army by President Johnson. He served in numerous Indian campaigns and battles, including the Santiago campaign during the Spanish War.

During his time in the Civil War, he was at the Battle of Mill Springs in January 1862; Battle of Perryville in October 1862; defeat of General John Hunt Morgan of Rolling Fork of Salt River in December 1962; Tullahoma Campaign June 1863; and maneuvers of the Army from Tullahoma to Chickamauga from June to September 1863.

He participated in the defense of Chattanooga from late September to November 1863; and the Battle of Missionary Ridge November 1863.

Jacobs participated as an enlisted soldier and commissioned officer in the 4th Kentucky Infantry. He was in a Mounted Infantry Regiment with a brigade of Cavalry (400 men) in Lafayette, Ga,. in an attack with General Pillow, who had 2,000 men and surrounded the brigade and demanded surrender.

After the battle, Jacobs’ regiment joined the main Army besieging Atlanta, Ga., and was assigned for duty to the cavalry forces under the command of General McCook.

Jacobs was captured in McCook’s raid in July 1864, and his effort to destroy the railroad leading from Atlanta to Macon, Ga. He remained a prisoner for several months, then rejoined his regiment at Macon and remained until he was mustered out at Louisville i August 1865. That concluded his career as an officer of volunteers.

Jacobs also was in campaigns and engagements as a quartermaster of the 7th U.S. Infantry, including the Sioux Indians on Pryor’s Fork in August 1872; Sioux campaign in 1876; and Battle Big Hole, August 1877.

He also accompanied the 5th Army Corps to Cuba as a chief quartermaster, major and quartermaster with the U.S. Army in 1898.

Jacobs retired from the Army as brigadier general in 1904 and moved to Los Gatos, California.

Jacobs was born on June 24, 1843, in Danville and was a son of John Adamson Jacobs, the fourth superintendent and principal of Kentucky School for the Deaf. Jacobs Hall is named in his honor.

Jacobs’ mother was Susan Walker Fry Powell, daughter of Major Robert Powell, an officer in the 3rd Virginia Continental Line in the American Revolution. Powell was a cousin of James Madison, and his wife, Ann West Powell was a second cousin of George Washington.

His wife was Grace Fairchild Chute of Minnesota.

They had three sons, West, an instructor at West Point; Robert Y. Jacobs, an agriculturalist, and Charles William.