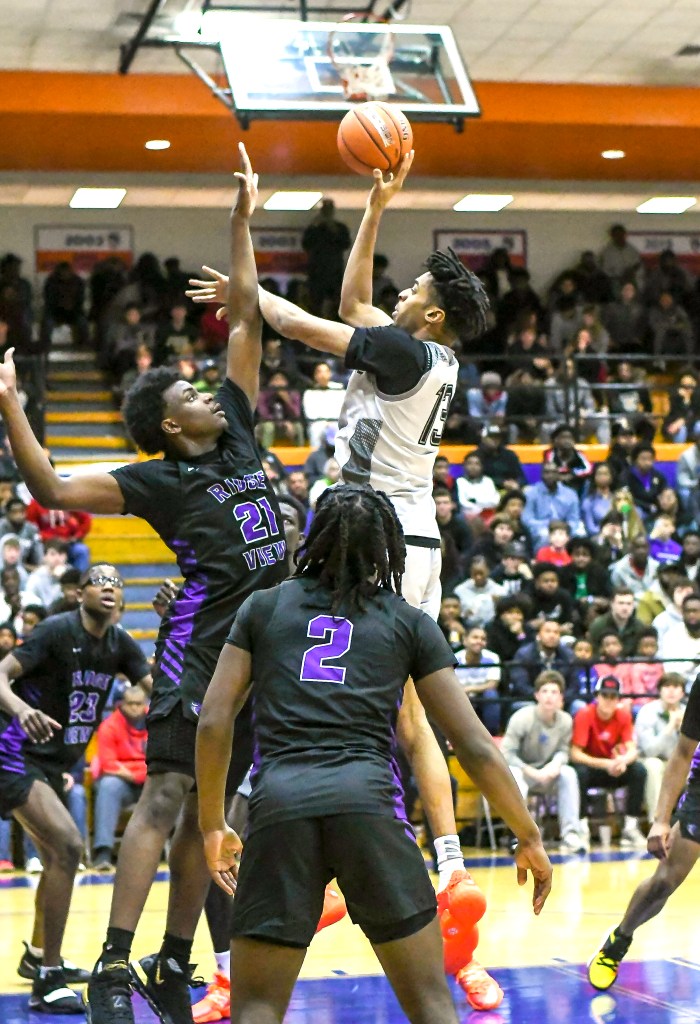 Growing up in Nigeria, soccer was the sport that Frank Anselem played first.
“For African kids, that’s the famous sport. You have easy access to soccer,” said Anselem. “There was not a lot of access to basketball courts and shoes or even finding 10 players to play a game. Still, I watched basketball on TV.
“Hakeem Olajuwon was one of the players I watched (in the NBA). He was so much fun to watch. I kept growing taller and just picked up basketball. God blessed me because I felt like I had some talent for basketball.”
He moved to Atlanta about five years ago and his basketball talent began to blossom more. After one year in junior high and two seasons playing high school basketball in Atlanta, he transferred to Prolific Prep in California last season. It’s one of the nation’s best prep schools and plays a high profile national schedule.
The 6-10 Anselem played with and against elite talent to help him pursue his dream of one day playing in the NBA, too.
“My favorite NBA player is Anthony Davis,” said Anselem, who has reclassified to the 2020 recruiting class and is being heavily courted by Kentucky. “When he signed with Kentucky I thought this dude is going to be a problem. He was a guard growing up and then grew into a big man. He was really good at Kentucky and it was so rare then for a freshman to go straight to the NBA.
“There are a bunch of dudes doing that now at UK. I thought at first that this Kentucky school must be really good and must have some kind of magic. I just did not understand how Anthony Davis could do that. But then I learned if you have a ranking and will work hard, they push you to bring out the best in your and if you are ready to be a pro, then you go be a pro.”
Could Anselem be the perfect fit for Kentucky and the need the Wildcats have for another big for its 2020-21 roster?
“Frank loves playing for winners and has always been around talented players,” said Julius Smith, Anselem’s former AAU coach and recruiting advisor. “He has experience playing with high level talent and dealing with egos. Playing in a high stress environment does not bother him. He just wants to go to a coaching staff that will develop him.
“I think he would be a great fit at UK and would have a huge opportunity to play. The only two bigs they have are (incoming freshmen) Lance (Ware) and Isaiah (Jackson). They are both great but he does things they don’t do just like they do things he doesn’t.
“John Calipari is able to fit guys in the right places and Frank fits how he likes to play and he knows how to use guys like Frank defensively.”
Anselem averaged 10.5 points, 6.0 rebounds and 1.5 blocks per game last season when Prolific Prep went 31-3 and won the Grind Session national championship. Two of his teammates were Jalen Green and Nimari Burnett, two of the nation’s top 25 players in the 2020 recruiting class who had the offense run through them. Anselem was content to run the court where he has the speed of many guards, finish lob passes and protect the rim on defense.
“Frank is a great kid, a really good student and a good human being,” Phillippe Doherty, Prolific Prep director of operations, said. “He’s always been on track to graduate in three years. He’s an elite student who only has a few B’s in high school. All he does is study and work out.”
Smith admits Anselem is “still very raw offensively” but there’s no questioning his athleticism or 7-5 wing span.
“He is quick and can also use his length to stay in front of guards and faster wins,” Smith said. “He can switch on defense and is very adaptable to a man-to-man style of play.
“Offensively he is just scratching the surface of what he can do. He’s always been a 75 percent plus free throw shooter which is a good future indicator of his offense. He just has to have more confidence in his jump shot. In an empty gym he can rattle in 10 or 12 3’s in a row. He just needs that same confidence in games and it will come.”
Anselem’s weight usually fluctuates between 205 and 212 pounds. Smith knows that will change in college.
“That’s another reason he reclassified. He gets to spend an extra year now with a collegiate strength program,” Smith said. “Academically it was easy for him to reclassify, so by doing it he can start building his body more to go with his athleticism.”
Anselem, a one-time LSU commit, thinks a decision will be coming soon and appreciates that Kentucky coaches put no pressure on him to make a quick decision.
“Calipari is not putting any pressure on me at all. He just said if I did sign it would not be a cakewalk or walk in the park and that I better be ready to go and that would be fine with me,” Anselem said.

Bowden could be biggest surprise in this year’s NFL…