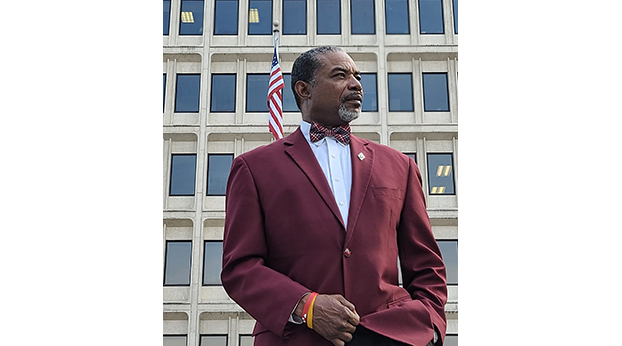 Bennie “Jerome” Smith says the city of Danville holds a special place in his heart, and he’s keeping that in mind as he campaigns to win the Democratic nomination to challenge long-time Republican Sen. Mitch McConnell for McConnell’s U.S. Senate seat.

Smith was born in Danville on May 3, 1958, at Ephraim McDowell Hospital.

“It was Derby Day,” Smith said in an interview with The Advocate-Messenger.

Smith spent a lot of time in Danville growing up. The son of Bennie B. and Dolores Whitley-Smith, he moved to Lexington when he began elementary school, attending Booker T. Washington Elementary School in the era of segregation until the summer before his fifth grade year when he moved back to Danville.

Even during that time while living in Lexington, Smith said he spent many summers and holidays with his grandparents, William Clarence and Maggie Ellen Whitley, at their house on West Lexington Avenue.

Smith attended Edna L. Toliver Elementary School, where he developed a love for playing the saxophone after being introduced to it as a way to deal with negative emotions resulting from his parents’ divorce.

Smith ended up moving back to Lexington near the end of his eighth grade year, but said he still has very fond memories of his time in Danville, from playing youth league football at 6th Street Park and being part of the Salvation Army Boy Scout Troop, to playing in parades with the Bate Junior High Band, among a host of other positive memories he holds.

“The city of Danville has and will always have a special place in my heart as I made many friends there and experienced many things like shopping for all our clothes at the Hub Frankel, getting birthday cakes and pastries at Burke’s Bakery, and attending Sunday services at St. James A.M.E. Church,” Smith said.

Smith, now 62, is running in the Democrat primary for U.S. Senate and he said his roots in Danville separate him from other candidates, along with his political activism and his musical talents. Smith volunteered with the Obama-Biden presidential campaign.

“What sets me apart from the other candidates in this field is the fact I’m the only candidate born in “The City of Firsts” where the first state conventions were held and where the state constitution was first drafted and adopted before statehood was established,” Smith said. “A few other things are my 24 years of political and grassroots civil and human rights activism as a member of two organizations like Kentucky Alliance Against Racist and Political Repression and Fellowship of Reconciliation, my bold and aggressive 21st century platform initiative that calls for creating a rapid and light rail passenger train service locally and regionally to reconnect towns and cities locally and statewide, and finally, I’m the only candidate in this race that can play a “mean sax.”

Smith said his career experiences in a variety of fields allow him to be able to connect with people across racial and socio-economic lines. Smith is currently a Class A CDL professional driver but is also a musician, promoter, and event planner. He’s also worked as a bank teller, call center customer service representative, freelance writer, and several other jobs.

“I can communicate and relate to everyone, from the corporate business owner and executive, the street savvy hustler, the gun rights “good old boy” activist, the coal miner, the youth, the elderly, the military veteran, the college professor, and the trucker,” Smith said. “I’m basically a people person who meets no stranger.”

Along with his career experiences, Smith said his life experiences will bring a fresh perspective to Washington D.C., and he will be a senator that represents all Kentuckians.

“I feel my personality and my respect for all kinds of people regardless of their race, ethnicity, gender, religion, socio-economic class, sexual orientation or their zip code allows me to communicate with citizens and voters where they are,” Smith said. “Plus my life experiences with being a parent, grandparent, former homeless citizen, and being subtly, yet blatantly, discriminated against by a company gives me a well-rounded experience of what most Kentuckians go through on a daily basis. Therefore, I’m approachable and will listen to all constituent issues and concerns and will work hard to reach common ground to find solutions.”

Smith’s interest in running for U.S. Senate stemmed from a couple of experiences. He said it started in 2008 while volunteering for the Obama-Biden campaign and seeing the wide diversity of staffers and volunteers. Then, in 2014, another spark for his political aspirations came.

“I had just completed working as a hired field organizer for the Obama-Biden Presidential Re-Election campaign and was really getting frustrated with the way Mitch McConnell was disrespecting and blocking every progressive legislative agenda,” he said. “But he first disgusted me after he made the statement about doing everything in his power to make President Obama a one-term president back in 2010.”

His inspiration for the 2020 campaign came from the 2018-2019 federal government shutdown, which lasted 35 days making it the longest in U.S. history. Smith said McConnell and President Trump could have avoided the shutdown and could have shortened it. He organized a benefit concert in west Louisville to raise money for federal workers who were considered contract workers and weren’t receiving back pay.

Smith’s platform focuses on four main issues. Those include ensuring affordable and accessible healthcare, addressing climate change by luring and creating renewable and energy efficient technology jobs, descheduling and legalizing cannabis for medicinal and casual use to “offset the monopoly the pharmaceutical companies have on high drug prescription prices and to wean patients and addicts off opioids,” and increase funding for education while providing raises for teachers and lowering classroom sizes.

Smith said he also wants to see more jobs come to the area, particularly mentioning the central Kentucky area. He says he wants to see more support for job skills training and funding for those willing to enhance their personal and professional careers, as well as encouraging people to pursue a GED and create partnerships with Centre College and KCTCS colleges to “ensure everyone has a chance to succeed.”

“I just want to let my Danville and Boyle County citizens and voters know that I’ve always been proud of my Danville roots and will make sure you have a voice in Washington, D.C.,” he said. “I will also even consider establishing an office in Danville-Boyle County to ensure you get the kind of resources and services you so deserve.”

More information about Smith’s U.S. Senate campaign can be found on his website at benniejsmith.com.