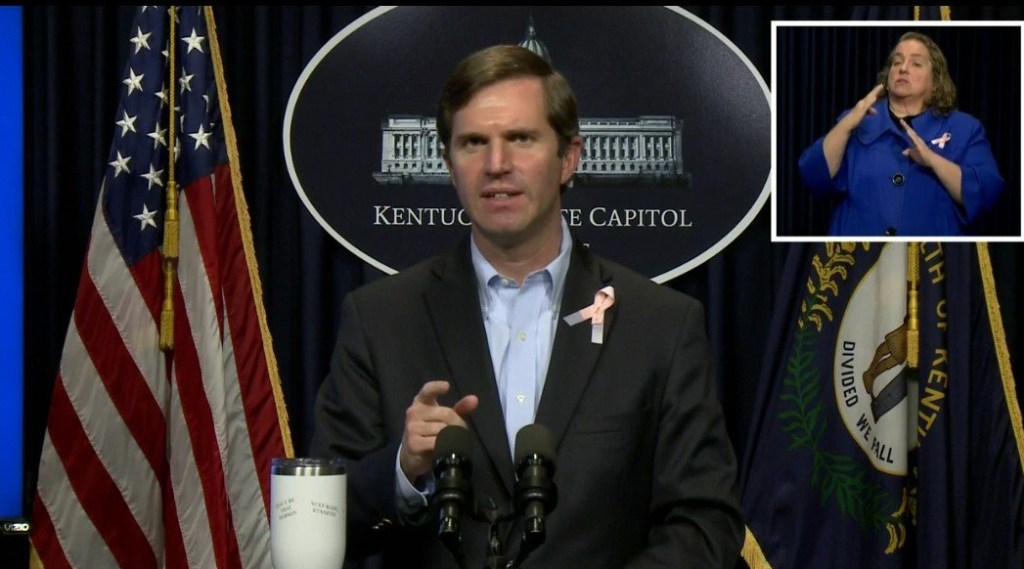 FRANKFORT, Ky. (KT) –There was a significant drop Wednesday in both new cases and deaths due to the coronavirus, Gov. Andy Beshear said during his daily press briefing at the Capitol.

A total of 159 new cases were reported, a significant decrease from the record 625 announced on Tuesday, although 309 came from tests of inmates and workers at Green River Correctional Facility, the only state prison to experience an outbreak.  Wednesday’s new cases bring the total to 5,934 since the start of the pandemic.

There were also eight deaths reported, meaning 283 Kentuckians have now lost their lives to COVID-19.  Jackson, Kenton and Muhlenberg counties had two deaths apiece, while Russell and Jefferson counties each had one.

State Public Health Commissioners Dr. Steven Stack said his office received numerous calls from residents concerned about the outbreak at the Federal Medical Center in Lexington, which has inmates with medical issues as well as some minimum-security prisoners.

“This is a federal facility, not a state facility, so we don’t have jurisdiction,” he stated.  “The Lexington-Fayette County Health Department is recommending that anyone who has worked at the FMC since April 20 be tested for COVID-19 because they may have been potentially exposed during an outbreak.”

Media reports indicate there have been more than 50 positive cases at the facility.

Stack said anyone needing help should contact the Fayette County Health Department at (859) 899-2222, and they will be able to help with testing options.

Beshear also addressed the apparent lack of cooperation between the Federal Bureau of Prisons, which operates the FMC in Lexington, and state and local officials, saying he fully supports Lexington Mayor Linda Gorton, who he says is trying to do the right thing for the employees there.

“We want to help you,” he said.  “It would be better if we could coordinate with the facility and get all of the employees tested.  Those are our citizens.  It would be helpful if we could get some type of cooperation, so we don’t impact their shifts if we get everybody tested.  Regardless, if you are one of our Kentuckians, we want to help you.”Beshear talked about the primary election, which has been moved to June 23 due to the pandemic upon recommendation by Secretary of State Michael Adams, and will allow everyone to request an absentee ballot, rather than have to stand in line at the polls.  However, at least some polls will still be open and Beshear was concerned about having enough poll workers, since many of them are older and susceptible to the coronavirus.

Then, he said, Kentucky National Guard Adjutant General Haldane “Hal” Lamberton came up with a solution, offering the help of his soldiers.  “Using folks we know are healthy, who have the PPE that is needed, and who are trained to take special safeguards,” and will be dressed in civilian clothes.

“We literally are spread out over the entire state,” Lamberton said. “I would offer that we have soldiers and airmen who live in virtually all 120 counties.  Quite simply, it is a commonsense solution for the issue.  We’ve been in contact with and are already working with the executive director of the State Board of Elections.  He, in turn, is going to share this information with all the county clerks.”

Lamberton also noted the Kentucky National Guard has Cyber Protection Teams, which are soldiers trained to deal with cyberthreats and can help the State Board of Elections on assessing and fixing any vulnerabilities of their computer systems, if needed.

Beshear also said his administration is changing its travel restrictions to better comply with judicial findings and more closely mirror the guidance of neighboring states.

The governor issued a new executive order that continues to ban anyone with a positive or presumptively positive case of COVID-19 from entering Kentucky, except as ordered for medical treatment. It also keeps in place requirements of social distancing on public transportation.

Those traveling from out of state into Kentucky and staying are being asked to self-quarantine for 14 days.

“Basically, the court said, ‘We think Ohio’s is fine. We think yours should be more like Ohio’s,’” the governor said. “So we’ve issued one today that’s just like Ohio’s. That’s what the court says will work, so that’s what we’ll do.”

Smiley resigns from Danville school board