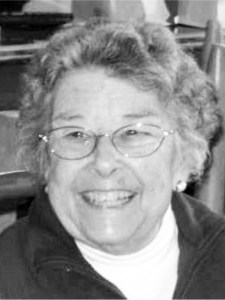 She graduated from Danville High School and Kentucky College for Women. On December 26, 1944 she married her high school sweetheart, Bud, in Miami Florida where he was serving in the Navy. The couple moved to Mt. Vernon, Illinois in the early 1950s.

Fay was one of the early “Pink Lady” volunteers for Good Samaritan Hospital. She was an avid reader and member of Fortnightly Study Club. She served as a Deacon at the First Presbyterian Church in Mt. Vernon. In addition she was active in area Girl Scouts and with the swim team at the Mt Vernon Recreation Club and was a member of Bridge Club and the Geological Wives group.

One of Fay’s joys was as First Mate on the Honey Dew. She and her Captain Bud spent many happy winters sailing the Abacos. She and Bud retired to Florida where they remained until 2015 when she moved back to Mt Vernon to be near family.

She was preceded in death by her husband Edward (Bud) Evans Rue, her parents, her nephew Thomas Bright and her niece Laura Bright Adams. Fay will be buried in Florida with Bud at a later date. The online guestbook is available at www.stithcares.com.