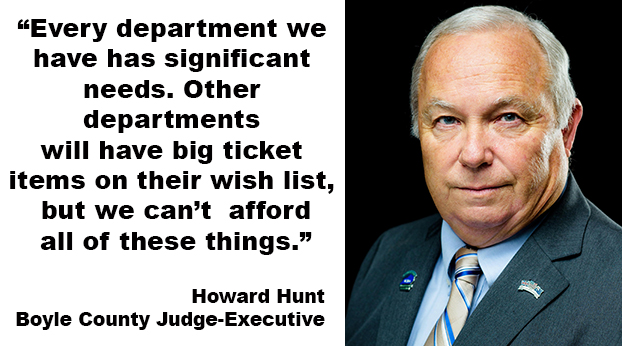 Boyle County Fiscal Court is proposing to delay purchasing of at least two “big ticket” items as it’s deciding on ways to cut expenses this year, at the same time it’s building the 2020-21 fiscal year budget amidst the uncertainties of revenue due to the COVID-19 pandemic and closing of so many businesses and industries.

During the court’s budget workshop on Tuesday, Sheriff Derek Robbins said the purchase of two cruisers is in this year’s budget for a total of $78,000, and two are to be included in next fiscal year’s budget.

“Usually we have two in each budget cycle. That’s four vehicles in the next two years,” Robbins said.

He added, however, that he understands that fiscal court “is not going to be in a position to do that. But I would like to at least get one this year and one next year …”

Judge-Executive Howard Hunt told the magistrates to remember that “the budget is down, income is down. There’s a little bit of an uncertain future and recovery. Everybody needs to consider where we are.”

“Every department we have has significant needs. Other departments will have big ticket items on their wish list, but we can’t afford all of these things,” Hunt said. Then he suggested allowing Robbins to purchase one vehicle this year and one next year.

Magistrate Phil Sammons asked, “Can we even afford one this year?”

Magistrate Jamey Gay, who also serves on the finance committee, said they suggested that no vehicle be purchased either this year or next.

After a lengthy discussion about the need of a new vehicle, and the type — either a cruiser or truck — the court voted to approve $40,000 for a new vehicle this fiscal year and $45,000 next fiscal year, instead of the $78,000 that had been approved for this year. Gay was the only “no” vote.

Robbins said, “I appreciate everyone’s consideration and I’ll make sure we can cut where we can cut and be a team player.”

In a discussion about fuel costs, Robbins said, “Our fuel costs have gone through the roof.” He explained, “Somehow we’ve been tasked with all of the mental detention transports” from surrounding counties. “They’ll bring their patients with mental problems to Ephraim McDowell, which in turn fills out transportation orders to Eastern State Hospital.”

Deputies from his office take between 200 and 300 patients to Eastern State in Lexington every year. And up to 95% of them are not Boyle County residents, Robbins said, which means they’re also not local taxpayers.

“It’s costing us money to get them from one place to another. I don’t know what the answer is. I can tell you we’re footing the bill for a lot of people that aren’t paying taxes in Boyle County,” Robbins said.

“They all migrate to Boyle and we end up with their expenses,” Hunt said.

Fuel costs will also increase when the courts open back up, Robbins said. Not only will sheriff’s deputies be transporting people to and from the local jail to the Boyle County Courthouse for rescheduled court appearances, “We’re going to have a new set of court dates for people who have to go to court. So it’s entirely possible that we’re going to have two to three guys on the road just making transports and trying to get people to and from Boyle County that are lodged in other counties right now,” he said.

In another in-depth budget discussion during the workshop, Emergency Management Services Director Mike Rogers asked the court to “stay on the rotation” for purchasing a new ambulance because some trucks are having maintenance problems.

Gay said he understands the importance for regularly purchasing a new vehicle for EMS. But for now, if they’re being maintained properly and are functioning within the codes and regulations, then the court should vote to postpone purchasing one until some time in the future.

“This is one of our truly outstanding nation leading departments. I don’t feel in my heart of hearts that skipping one year on a buggy expense is going to jeopardize our stature, if we maintain the fleet that we have.”

Gay also reminded the court that EMS was federally mandated to purchase $140,000 worth of cardiac monitors in the next fiscal year.

After more discussion, magistrates voted to take the purchase of an ambulance out of the proposed budget and increase the maintenance fund to $40,000.

Sammons, who wanted to purchase the ambulance said, “I want you all to remember, when you have that heart attack and he (Rogers) says ‘No, I can’t come get you. The ambulance is in the repair shop.”

Rogers then told the court an ambulance was in the repair shop at that moment. It’s the one “that broke down making the run the other day.” The shop called and said the cost to repair the ambulance was going to be $1,200.

“Do you want to go on and get that fixed?” he asked

Hunt answered, “Yes, get it fixed. you have to.”

Lyons stepping back from role at Centre College