Question: Jerry, with everything that’s going on I’ve been bored out of my gourd. I’ve been going through some things that I brought home from Mom and Dad’s. I feel terrible that some of this stuff has been packed up since 2005.

I found this piece and loved it and I don’t ever remember it being in the house. I don’t have a clue as to what it is. I’m guessing an ashtray. Could it be worth anything? 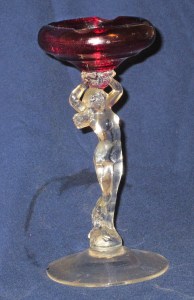 Answer: This is a super find. What you have is a very collectible piece of Cambridge glass.

Cambridge Glass was an American manufacturer of glass. Formed in 1873 in Cambridge Ohio. Like Fostoria and Heisey, Cambridge was a heavy hitter in filling the market with high quality glasswares. They really came into their own in the 1920s, by producing some of the most original designs in the most gorgeous colors. This is where your piece comes in.

In the 1950s the company hit financial hardships. Failing to compete with mass produced, cheap glassware, they closed for a short time in 1954, reopened in 1955, but ultimately, closed for good in 1958.

You are correct that you have an ashtray. This harkens back to a time when smoking was in vogue and proper accessories were paramount. Aside from the aspects of this being a fine piece of glass, smoking items are very collectible right now, even if you don’t smoke.

This line by Cambridge is called #3011 Nude Figural Stem, or later, they called it Statuesque. It was produced in 1931 with a whopping 28 pieces featured in the line. By the early 1950s, it had been dwindled down to only eight pieces, and as I said earlier, the company closed in 1958.

There was a wide range of colors, with some being experimental and quite rare. Your color red, was called carmen, and is very desirable. But the stems were always either clear or frosted.

I shopped around online and came up with quite a few reference points. In the real and current world, I found examples like yours that had actually sold for $150 to $175. On the flip side, I found some upper retail venues that had this ashtray priced for upwards of $300 to $375.

This is a great find. Keep searching, you might have the cigarette box buried down in some box. Thanks for a super question.

Library book drop to be open on Thursdays