Working from home: The struggle is real in the new normal 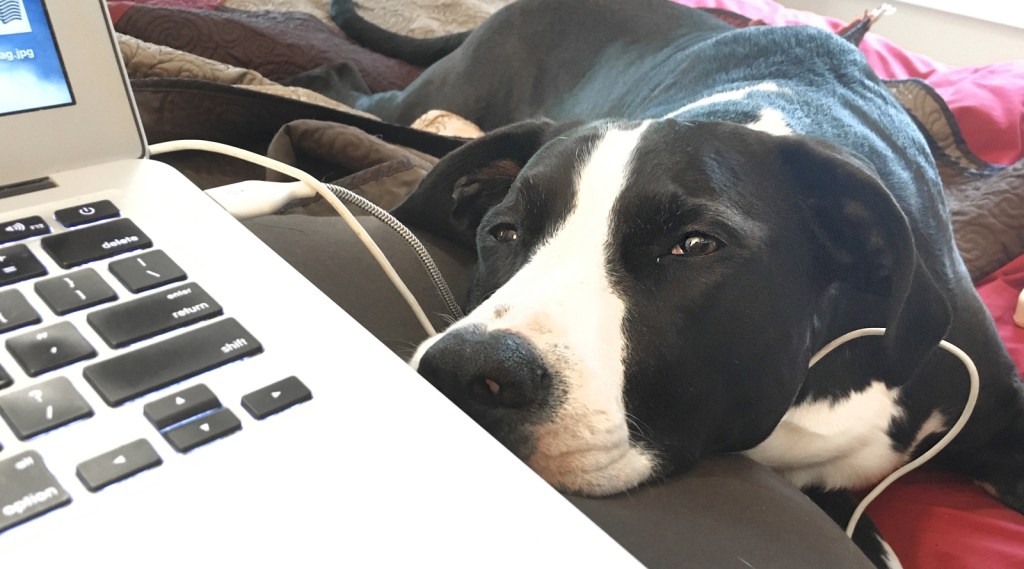 Riley, a dog belonging to Advocate-Messenger Robin Hart, is close at hand as Hart works from home during the COVID-19 pandemic. (Robin Hart Photo) 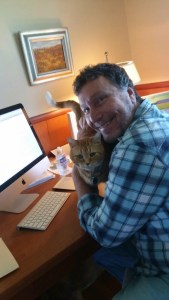 Director of the Danville-Boyle County Chamber of Commerce Jeff Jewell says Raleigh, his cat, has been an excellent work assistant during the healthcare pandemic. (Photo submitted)

Editor’s note: This is the first of a four-part series about life during the COVID-19 pandemic.

We’re all in a constant state of adjustment in the early days of May, although the coronavirus has had us shut down since March. We now await the next few “phases” to be enacted to reopen our lives, lifting restrictions safely, allowing some businesses to reopen.

One of the biggest adjustments for many has been figuring out how to successfully work from home. Even if it’s always been an option for you, working from home had a different meaning when it was just that — an option.

And Danville is a pretty meeting-heavy, involved town. There are governmental entities, branches of those entities, committees and subcommittees who meet. There are task forces and advocacy groups, volunteer organizations and their boards. And most have continued to meet during the pandemic, which means they are continuing to work.

A few community members shared what snapshots of their days look like — the struggles and the humor of it all — and how they’ve learned to transition during what many hope is just a temporary “new normal,” and some share their surprise about things they actually hope don’t change.

“It’s been a Zoom life, for sure,” says Alethea Price. She’s the county extension agent for family and consumer science with Boyle County Extension.

Because they are essential, agents have been staggering their work days within the office, where they can spread out and maintain a safe distance, but they still hold online meetings with the full team. Then there are the many boards Price sits on, and other organizations she’s involved with.

She says sure, there have been some struggles. For example, “The Early Childhood Grant application was due last week, and it required all kinds of things,” Price says. There were letters of commitment, support and conflict of interest papers, for example, that all had to be signed by several people.

“Not everyone has a scanner at their house. So I was struggling to get that together so we could support the children of Boyle County.” She says the Boyle and Mercer CECCs (Community Early Childhood Councils) are merging.

Price says the governor’s office is attempting to get more cross-county team work happening where early childhood is concerned, and strongly suggested some counties partner together.

Since Mercer and Boyle share a Headstart program already, she says it works out well,

“Which is fine, we get more money, but it has required more supplemental information, which has been difficult to obtain during all of this,” she says. “It’s been complicated, at times.”

For Price, COVID hit home. Two of her cousins, who are sisters, have been ill with the virus, with one being hospitalized due to it. She’s better now, and is home, but on oxygen.

As for what she can do from home, Price says, “It’s been really hard to motivate, but keeping a schedule is really helpful,” but that it’s also been difficult. “Your normal schedule is all out of whack, so it’s hard to create a new one — it’s been an adventure!”

One of the ways Price has combated stress is by doing a lot of baking during her downtime. She says it helps her relax, so her kitchen has been constantly filled with cookies, cakes, pies and breads, which she often drops off to different places, such as the Danville Police Department, to help out essential workers.

She’s also helped organize a mask drive through Extension with several local groups making them as volunteers, taking a round of deliveries to the children’s hospital at the University of Kentucky, who put a call out for the need.

Price says her coworkers have gotten used to Roscoe, her 75-pound boxer, making his way into the frame during Zoom meetings. “He will work his way up on the couch, next to me, like ‘hey, did I miss something?’” Her rescue cat, Mae, has also made frequent appearances, and almost seemed as she was participating in a video meeting Price took part in about vaccines.

She says the online meetings have interestingly allowed coworkers to get to know each other on another level.

“I feel like we’re getting to know everyone’s homelife. You see pets and sometimes family members in the frame, so it’s more relaxed for meetings. Although a bit more complicated, but definitely more relaxed,” she said.

All the technical difficulties aside, Price says she hopes many of the COVID-living aspects stick around for good.

“I seriously love that all this working from home has given families an opportunity to spend more time together. I know it’s been hard for parents to be homeschooling their kids, some while working, all of the sudden, but the time they’ve gotten to spend together has been really helpful. We’re just too busy to do that anymore,” Price says, referring to things like eating meals together and other family-oriented activities.

“So, it’s really been an old-school throwback, like old-time family values. So, I hope some of it doesn’t change. Your job is your job, but your family is obviously the most important thing … This has hopefully helped people be able to reconnect.”

Someone Price cannot wait to reconnect with in person is her father, who lives in a nursing home. She hasn’t been able to see him since March 15.

“So, I’m good with wearing a mask. The safer we are and the sooner this is over, the more quickly I’ll get to be able to see my dad again, actually get to put my arms around him and hug him. I think about the people who are missing their loved ones because of all this.”

Extending the family during COVID

Kristen Scherer and Fizzy Ramsey have increased their family members during the health pandemic, which seemed like a reasonable idea to them during the shutdown. Scherer works for an educational digital software company and usually travels a lot, so she’s had to transition to completely working from home. Ramsey is a physicians assistant and also the board president for the Danville-Boyle County Humane Society, so the couple is known to foster quite a few animals in need of extra care while they wait for their permanent homes.

“Our current foster dog, Badger, snores when he sleeps. He wandered into the office and posted up on the couch while I was conducting a virtual training for 25 Fayette County teachers …” Scherer says. Then, the snoring commenced.

“I did everything I could to ignore it and keep the course until a teacher interrupted and snapped, ‘Who’s not on mute? Is someone snoring?’” Scherer says she attempted to keep a serious face, picked up her laptop and gave everyone “a view of Badger, snoring. Laughter erupted and everyone felt much better knowing it was a dog and not a fellow coworker.”

Ramsey and Scherer have been fostering since March 11, and are now on their fifth dog, all under the age of 6 months. “We jokingly call it puppy bootcamp, where house training, socializing and manners are all a focus, which are difficult to attain in a shelter setting,” Scherer says.

They focus on the “runts” or those who tend to be high risk inside a shelter environment. For Badger, he is several weeks out from a surgery to repair a broken pelvis. “One of our foster puppies will remain in the neighborhood since she was adopted by the Cullen family, and another went as far as Austin, Texas, before travel restrictions were in place,” she says.

Another vulnerable population now is unadoptable kittens, who either need to be bottle-fed or kept warm while they reach an appropriate weight, Scherer and Ramsey say. This past week, they also took in five orphaned kittens.

“Our 13-year-old Labrador is a natural surrogate mom to kittens, and she couldn’t be happier to dote on a new litter.”

“It’s really funny, I’ve noticed in meetings and one-on-one conferences, when so many of us are stuck working at home, people seem to really, really value seeing each other face-to-face, even online,” says Jeff Jewell, director of the Danville-Boyle County Chamber of Commerce. Jewell was interviewed about the struggles of small businesses during the pandemic, and brought up some of his own pros and cons about working from home.

“The first five minutes is like making that connection, and you can tell some people have been in their house for way too long with their kids,” Jewell says, laughing. “They say they want to talk about anything beyond Barney …”

But transitioning to all-online all-the-time has been somewhat difficult for him, he admits.

“I’m an in-person kind of person. I like to make contact, let them know I’m there.” With a lot of business people, Jewell says he serves as more of a sounding-board than anything.

“Many are worried about the best path to take to remain a viable business. So, for me, it’s frustrating to not be able to put a hand on their shoulder, to let them know I’m here, I get you. It’s hard.”

A ‘different kind’ of work and family time

“Plus, people working from home are still helping family members by running errands to get necessities,” says Robin Hart, an Advocate-Messenger staffer. “And, I won’t mention names, but some workers also have to deal with their dog constantly wanting to be petted, fed or take a nap with them …”

Hart says add in the feeling of being in the home with your spouse, for long hours, “every day and every night. And I’m sure he feels that way, too …”

She says there’s also the boredom of the home environment, and some of the feelings this can bring on. “The longer I sit here, the more dust and cobwebs I see. I need to paint the walls and woodwork; the carpets need cleaning; and I’ve also been working as an at-home IT technician, since we’re the only ones here … And, I’m sick of all my curtains and furniture.”

But yes, she says, there are some pros to being secluded for work, even though everyone is still required to Zoom. “Then there’s the typical dressing for business on top and comfort on the bottom. Kind of like a clothing mullett.”

Hart says she has been visiting her mother-in-law these days. “Today, she came to her second-floor window and I was below with (my dog) Riley, and we talked on the phone. Right next door, on the ground floor, a woman was visiting her dad through an open window.”

On the morning we spoke, Hart says she just went to her mom and dad’s, who put a sofa and chairs in their garage. “They raised the door and we had a nice visit, but no hugs.”

Next up — two local restaurants talk about how they’ve changed their process to serve the public during the health pandemic.

Clerk urges voters to use absentee ballot for June’s…