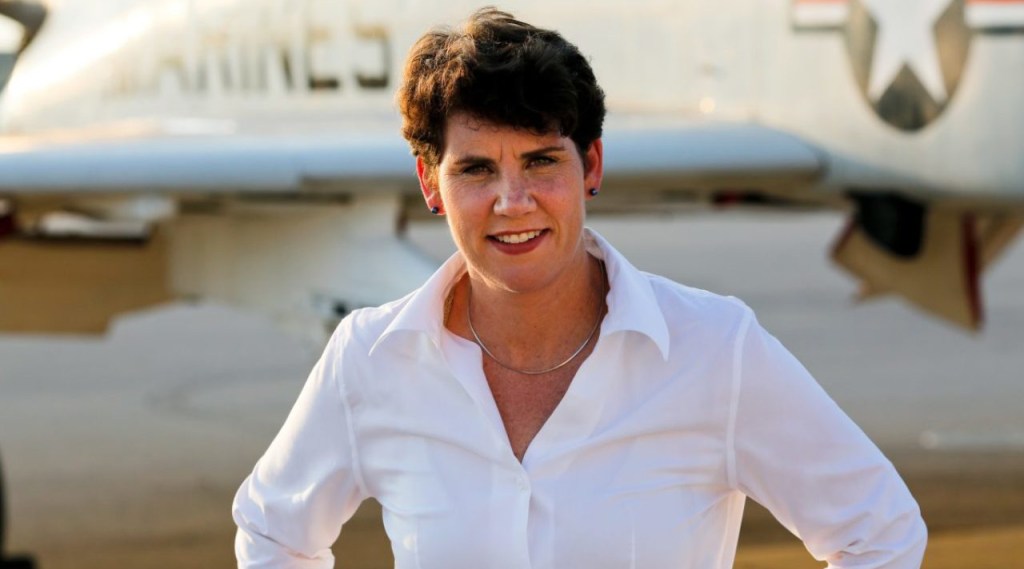 Amy McGrath has dedicated her life to serving her country. Serving 24 years in the United States military, McGrath said she wants to serve her country in a new way — as a United States senator.

McGrath is running as a Democrat for the United States “My life has been dedicated to serving this country,” McGrath said in a recent interview with The Advocate-Messenger. “I believe, as many Kentuckians believe, that we need better leaders in this country and need more servant leaders. That means people who are going to put people ahead of their personal interest or their political party interests. For me, I’m in this race to take the fight to Washington… As a Marine, I have always been one to take on hard challenges and that’s why I’m taking on this challenge today.”Senate seat currently held by long-time senator Mitch McConnell, who has represented Kentucky on Capitol Hill since 1984.

McGrath, who lives in Georgetown, initially rose to notoriety during another political campaign, in which she challenged Republican incumbent Andy Barr of Kentucky’s 6th Congressional District. Barr narrowly defeated McGrath, but it was a competitive race in a swing district. Not long after, McGrath decided she wanted to challenge McConnell, the Senate Majority Leader.

McGrath said that McConnell has been in office for too long, and in the process has “left Kentucky behind.”

“I’m very worried about the direction of our country,” McGrath said. “Senator McConnell has been in office for 35 years and he wants to be in office for 42 years. Most of us don’t believe you should be in office that long. That’s why I am for term limits. He has left Kentucky behind in so many ways and we need new leaders in this country.”

McGrath said that in the midst of the COVID-19 pandemic, it is becoming clear that healthcare is a major issue. McGrath said it is one of the most significant issues for Kentucky, and thus is a major component of her campaign.

She noted that with so many people losing their jobs because of COVID-19, many have lost their health insurance coverage that they obtained through their employer.

Bringing high-paying, quality jobs to Kentucky is also a priority for McGrath.

She said it is vitally important to invest in workforce development and education in order to be able to provide those jobs in Kentucky.

“We have some real gaps in 21st century infrastructure in Kentucky,” McGrath said. “That wraps around good quality jobs and healthcare, and Mitch McConnell has no plan to fix that. He said infrastructure is a non-starter in the Senate and that’s just not a vision for the future. Kentucky needs that.”

That lack of broadband access has hurt the state in luring potential employers to the commonwealth, McGrath said, and until it is more accessible across the state, Kentucky will face challenges in bringing more of these high-paying, quality jobs.

“We have to look at 21st century infrastructure in the same way that Republican President Eisenhower looked at his vision of the interstate highway system in the 1950s,” McGrath said. “We have to have leaders that understand it is a public good and if you build it, they will come. We built the greatest economy the world has ever seen because we as a country came together and created the infrastructure for that economy.”

McGrath also noted the importance of healthcare in bringing jobs to Kentucky, specifically mentioning the opioid crisis and the impact it has had on Kentucky’s workforce.

“The Kentucky Chamber of Commerce has said one of the biggest impediments to growth in our state is the opioid drug crisis,” she said. “That’s a lot of why businesses don’t want to come. They can’t find the workforce that is trained, developed, and healthy. We have to invest in treatment and prevention for the opioid crisis.”

As for her Senate campaign, McGrath said she and her staffers are doing their part. Many staffers are working from home and others are practicing social distancing in the workplace. McGrath said her campaign launched the Commonwealth Common Health Initiative, which aims to match healthy Kentuckians looking for a way to serve vulnerable citizens who need assistance, such as going to the grocery store.

The initiative also has helped by supporting food banks that are struggling with supplies and volunteers. McGrath said the initiative has raised more than $50,000.

McGrath said she has also been conducting virtual meetings with citizens and local leaders across the state with campaign stops temporarily on hold. She said these meetings have provided valuable information about the needs of Kentuckians.

“You can’t be a leader unless you’re listening to your fellow Kentuckians and working toward their needs,” McGrath said.

The Kentucky Primary Election was originally scheduled to be this month, but was postponed until June 23 and due to the pandemic, Kentucky will be allowing mail-in voting for citizens.

McGrath said she agreed with the decision announced by Kentucky Gov. Andy Beshear and Kentucky Secretary of State Michael Adams.

“Every Kentuckian needs to have a voice, and you should not have to put your health in danger to vote,” McGrath said. “That’s why we need more funding for mail-in voting. The federal government needs to help states now to be able to do this. We need to make sure we’re supporting the United States Postal Service. The bottom line is that I served in the military for 24 years. I voted by mail for 24 years. It works. It worked just fine for me. We can do this and it’s the right thing to do right now.”

“I’m somebody who believes that in leadership, character matters,” McGrath said. “I’m a common-sense Kentuckian. I want to do what’s right for Kentucky. I’m tired of partisanship and I am for working people and I’m not bought off by special interests.”