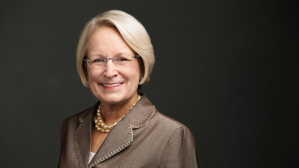 Judy Perry Martinez is president of the American Bar Association.

The COVID-19 pandemic has forced dramatic changes in our lives, including in the ways we communicate, feed our families and work. Now, a new survey released by the American Bar Association shows the American public also believes the pandemic should change the way we exercise the most important of our legal rights — the right to vote in a free and fair election.

In recognition of Law Day, held each May 1 to celebrate the rule of law, the ABA asked the U.S. public about aspects of voting and other civic issues, in our 2020 Survey of Civic Literacy, an annual measure of the public’s knowledge and opinions concerning government, history and the Constitution.

The results demonstrated a dramatic shift in the public’s attitude toward online voting since the COVID-19 pandemic hit in force.

In our first survey, conducted March 9-13, just before the pandemic began to widen throughout our country, only 34 percent said they supported the ability of Americans to vote online rather than going to a polling place. A month later, when tens of millions were under stay-at-home orders, a majority (55 percent) said they supported online voting.

In the first survey of 1,000 adults, nearly two out of three people (63 percent) said they opposed online voting. But by April, amid a rising death toll from the coronavirus, opposition to online voting dropped to 40 percent. Our pollster called that one-month change “earth-shattering.”

In the wake of the pandemic, the American public also had strong feelings about maintaining civil liberties.

In April, we asked 800 adults in the United States if the government should be able to suspend certain First Amendment rights during a serious national emergency such as the current pandemic. By large margins, Americans rejected the idea of suspending freedom of speech (92 percent) or freedom of the press (87 percent) during such an emergency. But at the same time that most of the country was under stay-at-home orders, a majority (54 percent) said they support suspending the First Amendment right of assembly during a national crisis.

Respondents exhibited a strong knowledge of who has the legal authority to issue statewide quarantines and stay-at-home orders in the United States. More than two-thirds (71 percent) knew that state governors have that power, but 18 percent believed it is a power of the president of the United States.

The survey revealed other interesting results about Americans’ opinions regarding voting. For example:

—A large majority said they supported allowing voting before Election Day (78 percent) in the March survey and 72 percent in the April survey.

—In March, another large majority (72 percent) said they supported restoring voting rights to felons who have completed their prison sentences.

—In the same March survey, a majority (52 percent) said they believe voter fraud is a major problem in the U.S. electoral system.

—A significant majority (82 percent) supported requiring voters to present an ID to prove their identity before voting.

The message of the surveys seems clear: Americans want easier access to voting while ensuring that the election process is unassailable. And even in times of crisis, they cherish their civil liberties.

Judy Perry Martinez is president of the American Bar Association.