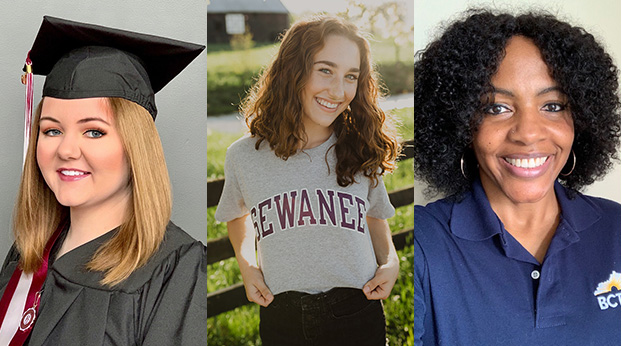 Casey Craiger, left, a Boyle graduate who made it through college in three years, says she feels she deserves more than an online ceremony after her hard work. “But, I’ve been very fortunate,” Craiger says, who will move to work for a Cincinnati TV station later this month. Claire Strysick, center, was disappointed to have to return home for her first year of college at Sewanee, The University of the South in Tennessee due to the COVID pandemic, but says she’s been fortunate to have very interactive faculty members leading her online classes. Dr. Michelle Carter, director of the Danville Bluegrass Community and Technical College’s campus, says they extended the school’s Wi-Fi in order to hopefully help students who don’t have digital access.

Editor’s note: This is the third of a four-part series about life during the COVID-19 pandemic.

College students say there may be a misperception about them during the coronavirus crisis. Sure, some say, there were students who celebrated the aspect of “no more classes,” where attending them in-person is concerned. But taking a full course load online, they say, is no walk in the park anyway, especially in these strange times.

Casey Craiger, a Boyle County graduate who graduated a year early from Eastern Kentucky University, says she’s been pretty fortunate. She’s in one of the smaller programs on campus — in electronic cinema production.

So, she says she already had all of her professors’ phone numbers, and interacted with them almost daily. “But, one problem I will say is that for my classes, I am still expected to create videos and my laptop is not equipped with the hardware needed to run the software I’ve been given access to.”

And with other programs she’s been given access to through the university, “my laptop is not capable of running them,” she says, so she’s been relying on her friends in the program in order to complete her work.

Craiger says that additionally, the program requires collaboration. “We work in small teams frequently, and each individual is responsible for one part — sound design, wardrobe, script and storyboard, directing ….” She says this collaboration is still expected, but with no face-to-face contact with any of her team members, “accountability has gone out the window.”

But Craiger still considers herself fortunate. She’s been able to work on her campus job from home, as well, during this time to complete her studies while social distancing.

“However, many of my group members are using this time to meet up with their friends or treat our extended leave from school as a vacation. Now that school which was once primary has become secondary for many of my peers, I’m left waiting for others’ contributions.”

This is her last semester at EKU, and she’s getting her cap and gown in the mail while submitting a photo of herself to be used for a virtual commencement, which will happen online this weekend.

“That’s just not how I wanted my three years, of working myself crazy to maintain a 4.0, to end. I feel like I deserve more than that,” she said.

Craiger has accepted a job as a master control operator in Cincinnati at Local 12 WKRC-TV and will move and begin her new career sometime this month.

“I’m very fortunate to have been offered this position, especially considering the coronavirus and all,” Craiger says.

She also had to be tested for COVID-19 before accepting the position.

“Luckily, I don’t have it, and my family has been very fortunate” with staying safe during the pandemic. “Also, the big long swab is worse than it looks on TV — I swear I felt it in my eyes, it went back so far …”

Claire Strysick, a freshman attending Sewanee, The University of the South in Tennessee, is home in Danville due to the coronavirus. She misses her small, local arts school she calls “a gorgeous, amazing school. I was very sad to be sent home from a place I’ve come to love so much, in my first year.”

As a pre-med student, she says there are so many science classes with associated labs involved.

“I’m majoring in ecology and biodiversity, and minoring in chemistry and Spanish. As you can tell, a lot of science classes …”

She’s currently taking organic chemistry, which is taken in two parts, with a lab section. Strysick remembers when all of this was just starting, “the big question we had was how are we going to do a lab? I think the interesting thing about college education is so many important things you’re able to do while at school that is impossible to replicate at home.”
But, even with the transition to all-online, she feels lucky since it’s a smaller school, which means smaller classes, not like UK or Western she says, which can have 100-plus students in each lecture.

“My classes are about 20 students. Transitioning online wasn’t quite as bad. I know all my teachers personally, so any concerns I had I felt comfortable emailing my professors about and got quick responses.” But, she says every class took a different approach where online processes were concerned, which was difficult for her at first.

“There’s an idealistic view of how much work you’re supposed to be doing as a college student. My friends felt for the first part that it was demanding, a lot of work especially given how stressful the time is, with everything going on. Some classes, I had more work than I normally had …” But, she says part of that was due to the extra week off many colleges took for spring break, which resulted in extra work for some classes to catch up, while other classes “said no, we’re going to take things a lot slower.”

Many of her professors would stay on after online classes, she says, offering a time for questions or suggestions from students. “But, I do feel that all of this has come at a toll. Because of that, I feel like I’m not necessarily getting the same education that I would if I was at school.”

Some professors have been sending out videos of their lectures with homework assignments instead of holding interactive classes, which isn’t as appealing, she says.

“The professors that are making an effort to have one-on-one time with students, or just class time with them to see them — I felt a lot more connected to, and the class itself has felt less clustered and confusing.”

This is referred to as synchronous and asynchronous learning, she says. “I feel like I fall behind in the video sent, may watch it later than I’m supposed to and fall behind.” She says the video lectures take away accountability.

“Sewanee is a smaller school, you can’t skip class and get notes from friends. Professors will know when you’re not in class. So, kind of switching to online learning, if they send videos and you don’t have to meet together … People will slack off, where I had to get up at 9 a.m. for organic chemistry, and sit there and talk to my professors three times a week, I felt more engaged in the class itself.”

One thing Strysick says she’s not been able to replace is studying at the campus library. As a pre-med student, “you find your ways to study, and the library becomes your home to some extent. It’s just super hard when you get kicked out of where you’re living and forced to go somewhere else. It’s hard transitioning from being used to learning and studying the ways you do at college to studying at home, figuring out new ways to do it that will be helpful.”

And the unknown of what will come has made it hard to plan for next semester.

“We don’t know if we’re coming back in the fall. I’m supposed to be taking a lab course again next semester, but if school gets canceled in the fall, I don’t’ know how this will play out …”

Strysick said it’s all been hard to wrap her head around. She also had to cancel her study-abroad plans for this summer, which included working in a hospital in Spain.

“I feel like online learning, it’s never going to be the same experience you’ll get in the classroom.”

Dr. Michelle Carter, director of the Danville campus of Bluegrass Community and Technical College said the school has worked hard to break down any digital barriers for students who live in rural areas.

She says they broadened BCTC’s bandwidth for Wi-Fi to allow students to access it from the parking lot of the campus, for one.

“We update students about Wi-Fi access points, such as around Centre College’s campus, the (Boyle County Public) library’s mobile Wi-Fi, the special offerings for internet from service providers, hotspots and utilizing the church Wi-Fi, until they could no longer attend church,” she says. “Basically, accessing Wi-Fi by any means available.”

Carter says the faculty is working directly with students to accommodate the submission of classwork to include sending pictures of assignments via cell phones, if and when necessary.

Carter says students also have the option to be assigned an E-mentor for individual support during this remote learning format.

“We’re here to assist students during this pandemic and are taking every measure to ensure they are successful,” she added

Coming up: The Danville Police Department deals with changes in procedures, types of calls during COVID-19 pandemic.