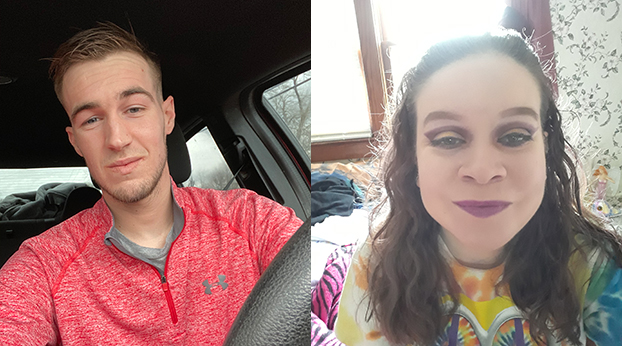 Ian Blevins, left, and Sarah House are just two of the many Boyle County residents who are still waiting for their unemployment benefits.

Unemployment numbers are commonly seen these days as the COVID-19 pandemic continues, but the faces behind those claims often go unseen. Many of those faces live right here in Boyle County.

It’s been more than six weeks since Ian Blevins was laid off from his job at Denyo Manufacturing, and he is still waiting for his first unemployment insurance payment.

The 24-year-old Blevins worked as a welder/fabricator at Denyo until he was laid off, along with many other employees at the company, near the end of March due to the COVID-19 pandemic.

A couple days later, Blevins went online and filed an initial unemployment claim. He wasn’t happy that he was laid off, but at least he was eligible for unemployment benefits, which would help at least some with a lot of uncertainty lingering on until he would return to work.

“The filing part was pretty easy,” Blevins said. “I did it all online, but whenever it came time to request my benefits, it said there was a problem. Something went wrong and it popped up an ‘X’ on my screen. There wasn’t much I could do except call them and have them fix it.”

Blevins said he never imagined the struggle he would have to request his benefits. Blevins got through an initial hurdle, called a tier one issue, with relative ease by speaking with a live person. However, he didn’t have the same luck when a new problem arose. This time, it was a tier two problem.

“They told me it was a tier two problem, whatever that even means,” Blevins said. “So I asked to be transferred to someone who could help me with that and he told me he couldn’t transfer me. Instead, he transferred me somewhere where it redirected me and he told me I had to leave my number and they would call me back.”

Blevins didn’t mind that though. He thought it was better than sitting on hold for hours. Little did he know that exchange would set up a path of frustration for Blevins as he received recorded messages week after week, usually on Sunday evenings at around 8 p.m.

It was the same message, time after time. The automated recording said they have his contact information and will contact him soon. That went on up until last week, Blevins said, when he received a phone call saying that someone was available to talk with him.

Relieved at the thought that he might finally get his issue resolved, Blevins was hopeful until he was put on hold for a couple minutes, only to be redirected to the same automated line where he left his name and phone number weeks earlier.

“It’s just a big circle of waiting and talking to a computer,” Blevins said. “I haven’t talked to a live person about this level two issue the whole time. I haven’t been called once except for that computer telling me that they have my number and that call was last week.”

Kentucky’s unemployment numbers have skyrocketed due to the COVID-19 pandemic as record numbers of Kentuckians file for unemployment benefits, many for the first time. It’s caused many individuals like Blevins to be left in what seems like an endless carousel of waiting on a phone call only to find themselves hearing a recording with no way to resolve the issue that is holding up their much-needed income.

As of May 11, Blevins, who has a 2-year-old son, still hadn’t received a payment despite multiple calls and messages trying to resolve his claim.

Blevins is slated to return to work on May 18, but going several weeks without any income has been a struggle.

Blevins received his federal stimulus payment, which he was able to use to make his mortgage payment and a few essential bills, but other necessary expenses like groceries have been a struggle.

“It’s just me and my 2-year-old son,” Blevins said. “We try to eat cheap and make whatever money we can. I had a few little appliances that I have been planning to sell for the last couple weeks, so I sold those to make a little extra money for groceries and other things like that.”

Blevins said he doesn’t feel like he is asking for much. He only wants the benefits he was told he would receive.

“I just want them to call me back,” Blevins said. “I’ve been waiting and waiting.”

Sarah Hogue is expecting to return to work at a local salon later this month, but her return date is still a little more than two weeks away, and unless something changes soon, it will have been almost two months since she filed her initial claim for unemployment benefits without receiving a single payment.

Hogue, a local hairdresser and part-time substitute teacher, went into work for the last time on March 18 before hair salons across the state had to close their doors. By that time, school districts were already closed, and days later, Hogue filed for unemployment.

This wasn’t her first unemployment claim. Years ago, she said, she filed for unemployment when she believed she was wrongly fired.

“The process was much simpler then and got approved almost right away,” Hogue said.

Now, Hogue is on week six since she filed for benefits and still hasn’t received anything. She’s been trying relentlessly to reach someone to try to resolve the issue causing the delay, but has yet to have any luck speaking to a live person that can assist her.

“I have called all the phone numbers I am aware of to speak to someone in Frankfort to get my account taken care of,” Hogue said. “This leads to either long wait times that never get through or having your number added to a callback list. When I do get a callback, it is an automated recording saying someone will call me back. I have yet to speak to a live person who can help me.”

Even worse, Hogue said that whenever she has talked to a live person, she was told that person can’t access her account.

That hasn’t stopped her from trying. Hogue said she continues to call regularly, hoping for a breakthrough that can end the delay in receiving a payment.

“It’s very hard to guess how many times I have called different numbers in Frankfort to try to get this resolved,” Hogue said. “I even tried to call the office of Andy Beshear himself but couldn’t get through there either. If I had to guess, I would say I’ve made about 100 calls.”

Hogue said the federal stimulus check she has received was really helpful in paying some of her bills, but it doesn’t make the process any less frustrating.

“This whole process has been very frustrating,” Hogue said. “I feel like if they are going to hire a thousand people to work in the unemployment office in Frankfort, they should all be trained on how to access people’s accounts and make sure they are receiving their payments. As annoying as it is to wait on the phone, it is even more annoying to finally get through to a live person just to hear that they can’t help you.”

“He keeps saying we’re all in this together but that’s a lie.”

Shawn Milburn is really frustrated with the unemployment system. The father of two has been out of work since April 1, when he was laid off from his job at Ephraim McDowell Hospital as a unit assistant.

Milburn filed his unemployment insurance claim the following day, but since then, he said he has talked to one person in state government about his claim, but said that person simply told him that they couldn’t help him and someone would call him back.

Nobody has called him, Milburn said, but he’s placed more than 50 calls trying to resolve a tier two issue. Milburn said he is not certain what the issue is that is causing the delay. He said he asked what the issue was in tier two, but the person he talked to said it wasn’t in her department and that somebody else would have to call him to resolve the issue.

“They put you in a queue system and the person that I finally did talk to was just like a body there,” Milburn said. “They said they’d call me back but they never did.”

During each of those 50-plus calls, Milburn said the experience is basically the same.

“You either wait for hours or you get put back in the queue system and they tell you that you’ll get a call back,” Milburn said. “Of course, you’re not going to get that call back. You won’t get anything back at all.”

Milburn has never filed for unemployment before, and his initial claim went through with ease, or so he thought. Now it has been more than 40 days with no income, and the bills and payments he needs to make aren’t going away.

“I’ve not received one dollar,” Milburn said. “I’ve pretty much exhausted all my resources. I still have house payments to make, car payments to make, and groceries to buy. I’ve exhausted every avenue there is. When I say I have zero income right now, I mean zero income. There was no reduction. It’s nothing at all.”

Milburn hopes to be able to return to work at the hospital soon, but right now, he said he is being told that it is unknown when he will be brought back to work.

“I know they have been hit hard soon since they had to stop all elective procedures and that is where hospitals make their money,” Milburn said. “So I know that they have taken a hit financially as well. I’ve been told they will call me back, but they don’t know when that will be.”

Milburn said he is hoping and praying that he will be able to return to work by the end of the month or else he will begin falling behind on his mortgage payments.

He said the frustration level is high as he and many others across the state are seeking the benefits they were told they would receive. While he said he is not typically a politically minded person, he said he has frustration toward Kentucky Gov. Andy Beshear.

“He keeps saying that we’re in this together, but that’s a lie,” Milburn said. “We’re not in this together. He should’ve made this a priority when he shut down the economy. I believe that had to be done, but these claims should be paid. I’m very frustrated with Gov. Beshear.”

Milburn said he feels like his livelihood has been taken from him due to the seemingly never-ending delay, and it has major ramifications for his family, including his two children ages 4 and 7.

“I still have to pay my bills and make my payments,” Milburn said. “I’m doing everything I can, but this needs to be resolved.”