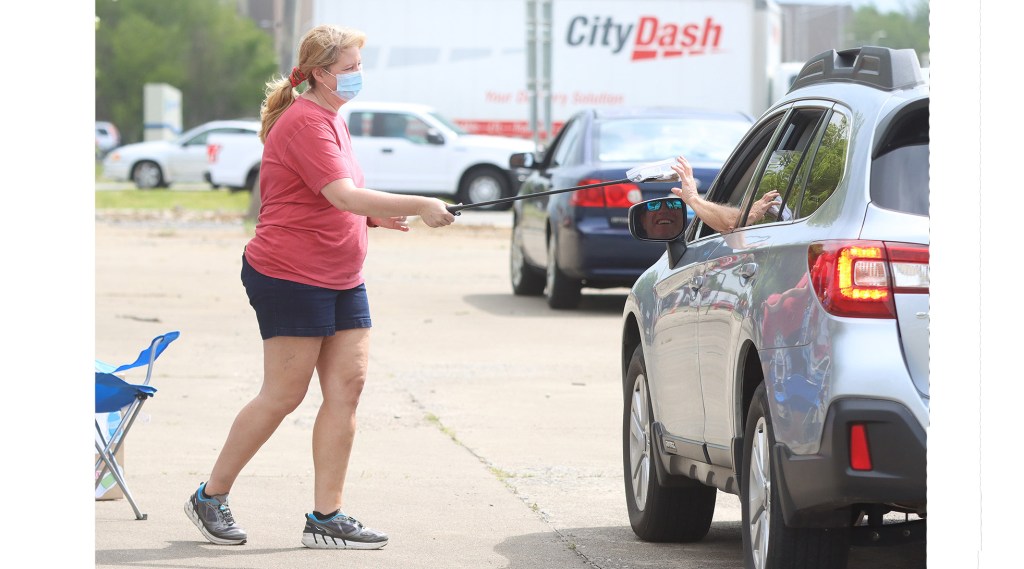 Stephanie Blevins, executive director of the Heart of Kentucky United Way, passes out free masks to the public Friday. The masks were made by inmates at Northpoint Training Center. Blevins said they had about 100 of the free masks to distribute. (Jeff Moreland Photo) 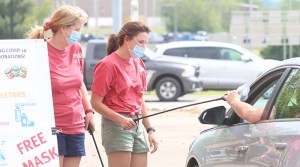 Northpoint Training Center inmates and Heart of Kentucky United Way are working together to provide free cloth face masks to area residents who need them due to COVID-19 restrictions while in public.

Earlier in the week, NTC donated 85 cloth masks that had been sewn by inmates to United Way for it to give away, said Executive Director Stephanie Blevins.

On Friday she and Community Impact Director Morgan Crutchfield were set up in the parking lot of The Showroom, at the intersection of the bypass and Lebanon Road, and handed out about 50 of the hand-sewn masks, while keeping a safe distance, she said.

At the same time, CASA of the Bluegrass was having a fund-raiser by selling pretzels provided by Auntie Anne’s Pretzel Truck from Elizabethtown.

Blevins said the staff at NTC are “big supporters” of the local United Way, but this was the first time inmates supported them, too.

“I am so thankful,” that NTC staff and inmates want to help Blevins added. “We try to help those with needs. And we know they will become greater,” during the pandemic and economic recovery. “We’re looking to make people’s lives a little bit better during this time.”

The masks were made with brown fabric and white ties. “They’re expandable with two pleats, like a surgical mask,” she said. “The sewing is immaculate!”

“We hope we’ll have many more masks to give away.” Depending on how often NTC, and another civilian volunteer, send masks to United Way, Blevins said they plan on giving them away once a week or semi-weekly. “This will continue for a while.”

A few masks were left over on Friday, so United Way was going to distribute them to the four senior citizen centers in the counties that it serves — Boyle, Garrard, Lincoln and Mercer.

NTC Warden Brad Adams said when the pandemic hit in early March, several inmates wanted to make masks for others incarcerated at the prison, but the Kentucky Correctional Industries took over that task.

Then a few weeks ago, when they saw the need for the outside community to have masks when going out in public, they stepped up again.

NTC Officer Kevin Wren took the lead on the project, Adams said. He procured a supply of brand new brown, poly-cotton fabric out of surplus for the face covering, and they cut new white sheets into strips and sewed them into the ties, he explained.

And they’re going to be sewing masks for the United Way for some time to come.

Then added, “We have a lot of talented people here.”

He said there are several inmate clubs at Northpoint that support other non-profit organizations as well.

“It gives them a sense of gratification and accomplishment. They’re excited to be able to help the community.”