(Editor’s note: Information for this article came from a Boyle County history about the Centennial Celebration of the Battle of Blue Licks, published in the Kentucky Advocate Archives in April 1884. Harvey T. Wilson, former grand master of the Kentucky Masons, wrote the article. Four of the Wilson siblings mentioned were uncles of Judge John Kincaid of Boyle County.) 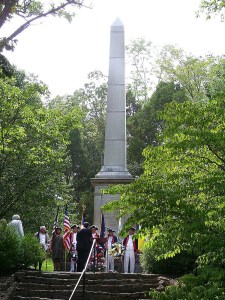 Monument at the Battle of Blue Licks State Park taken during a memorial service marking the 224th anniversary of the battle. (Wikipedia)

Judge John Kincaid of Boyle County was the son of Colonel James Kincaid, an officer in the Continental Line of Virginia who served under General George Rogers Clark in his famous expedition against the Indians and British beyond the Ohio River.

John Kincaid was born near Danville in 1791 and died in 1873. He was a lawyer, commonwealth attorney and state representative. He died in Gallatin, Tennessee, and is buried in Bellevue Cemetery.

John’s wife, Sarah Wilson, is the sister of the Wilson brothers — John, Israel and Henry and another brother not identified — who came from Virginia to Kentucky in the late 1700s.

John Kincaid and Sarah Wilson were married at the fort in Harrodsburg.

Sarah Wilson’s grandfather, William Wilson, emigrated about 1715 from Northern Scotland as a refugee from Ireland.

Her brother, Henry, was about 5 years old in 1759, when the Wilsons arrived in Fauquier County, Virginia.

Excerpts from Wilson’s article showed the Wilson brothers, John, Israel, Henry and another name he had forgotten and their sister Sarah lived in Virginia, before they migrated to Kentucky.

In 1782, John Kincaid went with his brother-in-law Israel Wilson and his brother, Joseph Kincaid, to the Battle of Blue Licks.

Israel and Joseph were among those slain in the battle.

John Wilson, the oldest brother, was the first brother to arrive in the wilderness of Kentucky in 1774. He came down the Monongahela and Ohio rivers with Captain James Harrod’s 41 adventurers in canoes (dugouts).

They landed at the mouth of the Kentucky River, ascended to Oregon to the lower end of Mercer County, across Salt River near McAfee’s Station and up the stream to Harrodsburg.

In the spring of 1775, John visited Boonesborough and stayed two years assisting in the defense of the settlement against numerous bands of Indians who were threatening and committing hostilities.

In about 1778, Henry Wilson and his brothers got a letter from their brother John saying they should try their fortunes in the wilderness.

They joined 40 men in Pittsburg in 1778, and traveled via flatboats to Cincinnati where it was a wilderness and not a cabin to be seen.

They went to Louisville, stayed several days and met John, then traveled to Harrodsburg and after a couple of years they went on to Lexington.

John was in Lexington when the Battle of Blue Licks was fought.

He joined Todd’s Company for the relief of Bryant’s Station. He also met his brother, Henry, whom he had not seen since he came to Kentucky.

Henry and his family left in the spring of 1781 for Bryant’s Station and traveled the next year to an early patentee on Cain Ridge.

In the fall, a Mr. Faulkner of Virginia arrived at the fort with his wife and five children, two daughters and three sons.

Henry and Faulkner’s oldest daughter Francis were married at the station. The next spring, he bought a large tract of land on Cane Ridge. He remained at the station because the Indians were too numerous to attempt Henry to locate there.

Indians attacked the station in August 1782. In the fall, Henry ventured to build a cabin on the waters of Brush Creek when there was not a cabin between his and Paris. He and Frances eventually had 12 children.

In the fall of 1822, Henry’s grandchildren were playing in front of “the old stone mansion” near the house when a tall, stout man, dressed in Indian style, buck-skin coat, pants and moccasins walked up to the house. The children ran to the house and told Henry an Indian was coming.

Henry discovered it was a white man and went to meet him. As soon as they came close enough to recognize each other, Henry exclaimed: Why, (Simon) Kenton, is that you?” Kenton replied, “Yes, thank God.”

Simon and Henry were born in the same county and neighborhood in Virginia and fought many battles with the Indians. They had not seen each other for nearly 30 years and sat up all night recounting their early adventures, hardships and narrow escapes.

It was the last time Henry and Simon met.

Simon left the next day. Henry lived on the farm he first settled in Bourbon County until his death in 1855.

The Wilsons were first cousins of Judge James Wilson, one of the distinguished signers of the Declaration of Independence, who died a member of the U.S. Supreme Court. A biographer of the signers declared in his work that Madison and Wilson “were the most useful members of the Convention.”