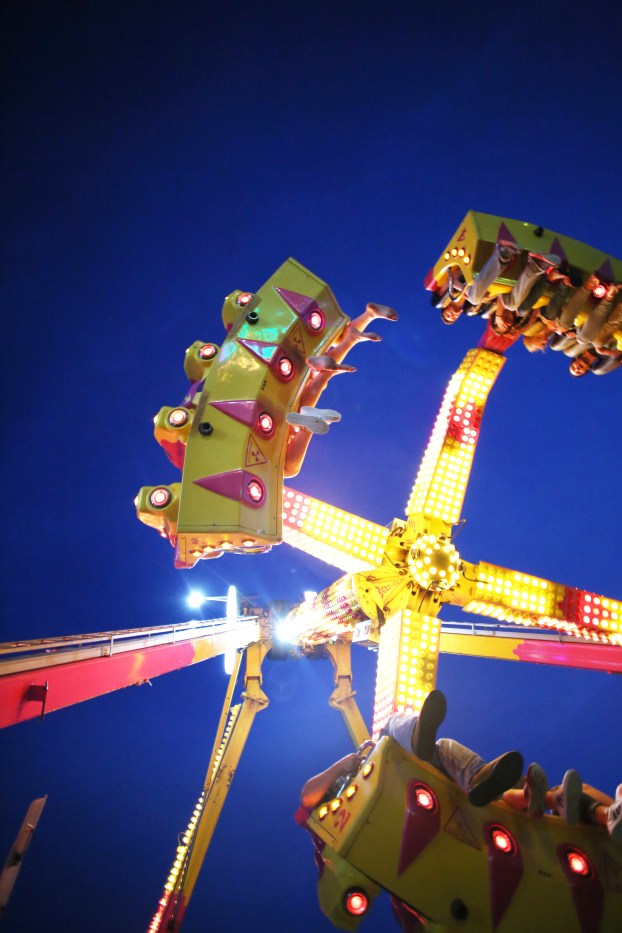 Feet hang down from a ride at the Boyle County Fair. (File Photo)

Fair will not be held in June, hopefully in July

The only sounds that will be heard at the Boyle County Fairgrounds during the week of the fair, scheduled for June 8-13, will be from crickets because the fair has been cancelled that week.

Friday morning, Boyle County Fair Board President Ryan Owens said hopefully the fair will just be postponed until sometime in July when state and federal COVID-19 restrictions may be loosened.

Ryan is also a director of the Kentucky Association of Fairs and Horse Shows, which is lobbying Gov. Andy Beshear to ease restrictions so that the state’s county fairs can open this summer.

“We’re working hard to convince the governor to have some county fairs,” this summer Owens said.

The KAFHS believes that local residents will be safer if they can have family fun at local fairs, instead of traveling out of state to other recreational outlets, such as Dollywood or to other state’s fairs.

If Kentucky restrictions are lifted, “It will be safer to keep everybody home, instead of going to other places and mixing with other people,” Owens said.

The KFHS recently sent a resolution to Gov. Beshear which recommended that county fairs be allowed to operate in Kentucky if they followed CDC guidelines and made a few modifications. It stated that county fairs, and their partnering carnivals “be allowed to provide a working plan of operation very much like the State of Ohio’s plan to be able to provide educational opportunities for the youth and competitions for all while providing good family entertainment at an affordable price. This could be the only time that families will have to be out because of the hardship from the COVID-19.”

The KAFHS also provided several recommendations of how

county fairs and horse shows could operate safely. Some of the suggestions include:

Owens said this is the first time the Boyle County fair has been cancelled or postponed in his 20 years of working with the fair board. And he still has hopes of having the fair later in the year.

No matter what happens to the 2020 Boyle County Fair, there’s still some excitement and intrigue within the board, Owens said. “The Boyle County Fair Board also plans on making an exciting announcement later this year.”