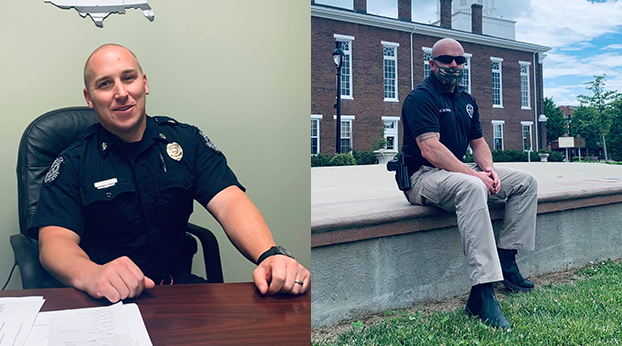 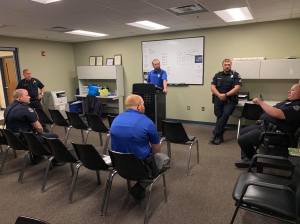 With all of the changes in our lives, attempting to coexist safely during the COVID-19 pandemic, it’s not uncommon to experience “cabin fever.” After the governor enacted social distancing restrictions, lots of us have been cooped up, somewhere, since March.

Many have been fortunate enough to be able to stay safe working from home, but others have had to continue showing up each and every day, still serving the general public in order to provide essential services. And their lives have been changed, too, in the many ways they’ve had to quickly adjust to new procedures, like distancing, additional protective gear requirements and disinfection practices.

Some of those jobs — like law enforcement — are seeing the multiple effects of the coronavirus on the public from the front line. 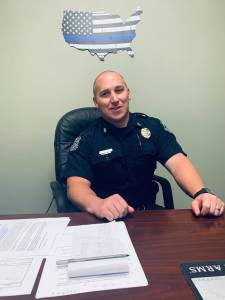 Danville Asst. Police Chief Glenn Doan says there has been an increase of thefts and domestic calls during the pandemic.

Asst. Police Chief Glenn Doan says the police department is seeing an increase in thefts lately; Boyle Sheriff Derek Robbins says the sheriff’s office is seeing the same. Both agencies are also seeing a rise in domestic disturbances. And both say it seems to be a sign of the times.

But that wasn’t always the case.

“When all this first started, we initially saw a decrease, a drop in some of our crime and calls,” Doan says, some in part to not as many people being out. But now, as things have begun to reopen, “I’m not sure if people have a bit of stir craziness or what … we’ve seen an uptick in domestic-related calls, and that could have to do with people being cooped up inside. Frustrations getting the better of people … more verbal arguments …” as well as an increase in thefts.

“We’re seeing it too,” Robbins says, and that the sheriff’s office typically hasn’t dealt with this many thefts and repeat domestic calls over a short period of time. “Mainly vehicle break-ins — crimes of opportunity, where everybody’s home.” But, home break-ins have been down, he says, because everybody is home.

Robbins always advises common sense about these types of thefts.“Take your valuables out of your car, or at least don’t leave them in plain sight,” and that includes firearms, most especially. “It’s one thing to get your change stolen out of your middle console, but it’s different when somebody who maybe shouldn’t have a firearm ends up with one. Things like that. Common sense.”

Where domestic disturbances are related, Robbins says historically, sure — drugs and alcohol may be involved. But lately, that’s not always the case. And there’s been a lot of repeat callers.

“I think people are just tired of being stuck inside with each other. A lot of them are just verbal arguments. They call, or someone else does, and we mediate …” Robbins says. And most calls have ended without other actions being taken, other than the parties going their separate ways within the home, for instance.

Doan says typically, the PD sees an increase in calls over the summer months, which he thinks will increase even more now, due to added aggravators.

“I think you do have people who are scared, they’re in an unknown situation, unemployment issues I think plays a part in it. The whole climate of what we’re facing right now plays a part, in domestic and criminal activity …” 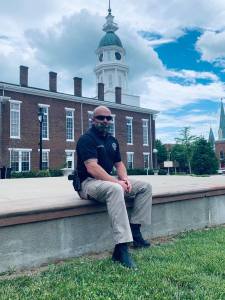 Boyle County Sheriff Derek Robbins predicts his agency will be overwhelmed catching up with serving papers and transport needs after the court system is back up and running.

Remaining that constant, knowing what to enforce

The PD is sharing the detail at Walmart with the SO, paid for by a contract with the company. Officers are stationed at the entrance/exit of the store on certain days, which has resulted in a slight decrease of shoplifting, Doan says, another type of theft they saw an increase in lately.

But that’s not their main aim for being there.

“They man the front door, and have Walmart policies and procedures to follow, like if they should have issues with a customer who doesn’t want to follow” the social distancing guidelines the store has in-place on its private property, he says. “And we assist only as needed.”

The PD still gets some calls about social social distancing complaints, like groups playing basketball. Doan says most of the time, their job is to be more educational, “to say, ‘hey, be careful, be mindful, this is what the executive order says.’ We’ve not had any issues … People have been very compliant, for the most part.”

He says they’ve assisted a few area stores experiencing “influxes of crowds,” and they’ve done walk-throughs, getting things back under control. “We give them advice, they may have to shut the store down a little bit, help people filter out.”

Officers have personal protection equipment provided to them, and use on a case-by-case basis, as do deputies. Both agencies say they are well taken care of by the health department where masks are concerned, as well as thanks to many area volunteer groups, making and distributing them.

Vehicles are disinfected after every transport. Both agencies had to figure out logistics early-on in the case of officer exposure and where to house them for quarantine, which could cause a damaging ripple effect within manpower, and officers were concerned about taking it home to families.

As Robbins says, procedures have seemed to work since there’s been no spread of infection among the forces. So now they know more about what to expect, should a rise in infections occur, forcing the full restrictions back in place.

However, things are still changing often, and Doan says that much is yet to be learned for exactly what guidelines will look like over the next several months. Will there be a spike in numbers, he says, is a question they just have to keep in mind.

Based on questions he’s already received, the sheriff is preparing for some complaints about enforcing mask “requirements.” Gov. Andy Beshear made a “strong recommendation” that Kentuckians begin wearing masks whenever in public by May 11, which of course set off the “civil liberties being violated” conversations and arguments all across social media.

But no, as has been discussed across multiple platforms, officers cannot fine someone just for not wearing a mask in public.

Robbins says he’s gotten questions about others seeing someone without a mask, “‘what are you doing about it.’ You know, I’m not getting into that. We’re not the mask police.”

However, businesses are setting their own rules; if it’s their policy all patrons must wear a mask, then officers may be asked to respond and enforce it. A customer could be asked to leave the premises for noncompliance.

“To me, it’s up to that individual business,” Robbins says. “If they choose to enforce it, they have the right to ask you to leave. And if they ask you to leave and you don’t, that’s where we get involved.”

‘We’re going to be overwhelmed’

Robbins says some of the increase in SO calls has been related to no real eviction processes being able to be in place due to the court systems not being fully up and running. “If somebody wants somebody out … people are almost stuck together, in some cases like that. Maybe a live-in boyfriend or girlfriend, they want to kick out and they really have nowhere to go, there’s really not a process for that right now.”

He says property owners are being affected too, and ones who own multiple rentals are having to deal with eviction processes on their own by delivering papers and notices to renters.

“Once this is over, we’re going to be so overwhelmed,” Robbins says. Typically, the SO is making around 80 transports a month, taking people from other jails to the Boyle jail, or to court. “And all this is just going to accumulate, and everybody’s going to have to be in court over a short period of time, so …”

And where the SO has halted serving most civil processes, due to civil court being closed, “we’re going to get just inundated, tons of papers to serve. Between paper service and transports? “ Robbins says, shaking his head. “We’re going to be overwhelmed.”

As of now, school resource officers are serving as backup when needed. The sheriff isn’t sure what the near future holds for staffing, when they’ll be able to move forward with any new hiring.

“And that’s what we use to operate off of.”

Doan says the PD has also seen an increase in narcotic related offenses lately, and notes the recent Friday when there were four different under-the-influence arrests of shoppers at Walmart.

“Especially some of our DUI arrests, traffic stops have increased, so it seems things are going up,” Doan says.

Chief Tony Gray recalls that there were five different overdose incidents in a short period of time recently. He says dispatch shows OD calls on May 1, 4, 5, 7 and 15.

“That’s the first time in a while we’ve had that many, to my recollection,” Gray says.

EMS Director Mike Rogers says although the numbers so far are a bit under for the average — last year, EMS did 57 OD-related runs; as of now, there have been 10 — it did seem like a lot, since they were concentrated over a short time period.

“I think it’s just when it comes in spurts, when a bad batch of heroin comes into town, you can see it,” Rogers says. “Not just Boyle, but Lincoln, Mercer — we’re close with other services, and we see the runs they’re making, and see that they are related.”

Doan says now, as things have started to open back up, “not that we’re at a normal level, by any means, but we have begun to go back to increasing our proactivity, self-initiated activity, more traffic enforcement, more specialized investigations, narcotic investigations, things like that are starting to operate more on a normal level.”

So, he says, it’s natural that the numbers increase.

“We were focusing more on the service-related calls. Being visible, getting out. We wanted to make sure everyone understood — we’re in this with you all, it’s such a big unknown, a lot of anxiety. No one knew what was going to happen, and we still don’t …”

Doan says the best advice he can offer the public is, “Protect yourself. Try to follow the guidelines that are set forth. These things are put into place for everybody’s best interest. And we’ll continue to be that constant in a world where everything’s changing.”