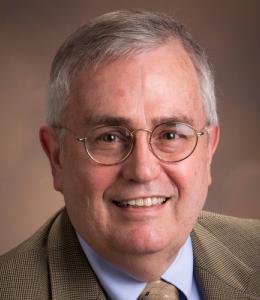 “I’m very worried that the public is becoming comfortable that this is not a danger,” and does not realize that only about 5 percent of Kentuckians have had the virus, he told Renee Shaw for “Kentucky Tonight” on KET.

“The entire crisis we have successfully avoided is still waiting to happen . . . in June or July,” he warned, if too many Kentuckians don’t take precautions.

Stack said he has seen too few masks and too little social distancing, but it’s impossible to police: “We rely on the multitude of people to do what needs to be done,” and they need to be educated about the risks — and the myths, such as the notion that the virus is much like the flu.

“To say this is influenza is like saying a rowboat is a cruise ship or a fireworks display on the Fourth of July is a thermonuclear bomb,” Stack said, reversing his metaphors while making his point, which was made in detail in a recent article in JAMA Internal Medicine.

He said to protect themselves, Kentuckians shouldn’t focus on what others are doing, other than to avoid them if they’re not wearing a mask.

Stack acknowledged that part of Beshear’s recent relaxation of some restrictions came from “a sense of what the public will tolerate.”

Beshear has begun gradually lifting restrictions though the state’s daily number of new cases has not been on a downward trajectory for 14 days, as called for in guidelines issued by the White House and the Centers for Disease Control and Prevention.

Beshear has justified that by saying the state finally has the capacity to test 2 percent of its population each month, as the guidelines recommend, but like other governors he now faces a possible shortage of people willing to be tested.

Stack said the state is working on ways to get faster, real-time information about the spread of the virus, and “We are going to have to hope” that it can be tracked fast enough and “the public will be responsive.”

Asked if it would have been better to have had a national strategy, Stack said “I would like to have has much more cohesion across the country,” because the varying rules in states make it difficult for the public to know what to do.

He repeated his advice to limit daily activities to avoid unknowingly spreading the virus, which can be most contagious before people realize they have it. He said people “should think twice about what is really important for them” as they choose where to go each day.

Appearing on the same KET program was Allison Adams, president of the Kentucky Health Department Association and director of the Buffalo Trace District Health Department. She said public- health policy is mostly about getting people to do the right thing, and viewers should think about “how much you care about your fellow Kentuckians.”