(Editor’s note: Thomas C. Crawford of Bluegrass Pike, Danville, wrote home about his personal impressions of the people and life during World War II in England, France and Luxembourg where after he arrived in February 1945.

Seventy-five years ago, T.C. Crawford was part of the 153rd Finance Disbursing Section of the Third Army when he wrote a letter dated March 2, 1945. It was published in The Advocate-Messenger on May 30, 1945.) 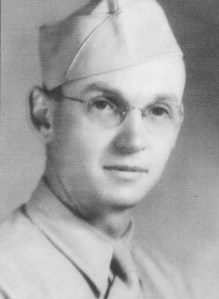 “Dear Folks: This is a very interesting little story of when I was in the country of Luxembourg.

We had been a number of days crossing France in real wintertime, sleeping in tents, and the very irregular traveling with a freight train was a cold ride.

We had on combat boots made of leather which we had treated to waterproof, and often we would have to take them off, wrap our feet in blankets to keep them warm.

You would have been amused if you had seen us cooking. We ate ‘C’ rations. Each meal contained two cans, one of some kinds of meat, the other a biscuit, piece of candy and some kind of drink, and either coffee, lemon, or cocoa.

At times the train was moving so we would have to eat the rations cold. Oftentimes we would be sidetracked for hours and that was when we enjoyed a hot meal. We built a fire in an old can, had a webnet of wire to support our ration cans heated by flames.

The ride across the English Channel was severely cold and rough. Although the sea looked calm, the swells of the waves were deep, causing more roll of the ship than the high seas.

When we arrived in Luxembourg, it was pleasant to be in a building, even though without heat, sleeping on the floor was better than sleeping in tents on the cold ground.

We were located in a beautiful city which had not been scarred by the war because of the internationally operated industries. This was the most beautiful city I have seen in Europe, but I am sorry I cannot tell you its name.

I had to walk four blocks to chow which was very good. I went to breakfast at 7 a.m. And it was still dark. At noon and at supper, when I left by quarters a child, usually a girl of six or seven years, would be waiting outside, take my hand and walk to the gate with me. When I returned, another would walk back with me.

Sometimes I would be down in town. Little girls would take my hand, walk a few blocks, say ‘Goodby’ and turn off another way. The people were very friendly. Most of them spoke three languages — French, German and English — besides their own Luxembourg.

One afternoon I was in town. I saw some cookies in a window which sign read ‘Salon’. I walked in. It was a small place, nice fixtures and beautifully decorated walls. It was the first time I had noticed fluorescent electric lights.

At first I thought I was in a gorgeous jewelry shop instead of a place to eat. I was seated, and sent my order for cookies and ice cream which were delicious. As I sat down, I was amazed at the neatness and beauty of the place.

The stores in this town did not open for business until 2 p.m.

Unlike England, an island set in a draft which does not care to depart from the Victoria Era, this city was modern and up to date.

In England where everything is done in reverse, even the traffic moving on the left side of the highway, I felt like I was seeing things 100 years before times. This place was a city of wealth before the war.

One night I was sitting in the Service Club. Some were eating doughnuts and sipping coffee, others drinking beer. In another part of the room the melody of one of Foster’s songs came from a piano. A young girl was playing.

Nearby I noticed a young, handsome lad in civilian clothes. I would guess his age about 19. I walked up and asked him a question. He spoke English beautifully. In course of conversation he told me this story.

The Germans came in for occupation. He was in school and was forced with a number of other youngsters to go to study anti-aircraft. He obtained a pass to go into Poland one weekend. He never returned, but made his escape home.

The Germans received a message that the Allies had captured a nearby town in the rear of this location. So the Germans withdrew only to find the information was a false alarm. Two weeks later, the Germans returned to this city to find flags of the Allied nations waving. They looted the city, and did a lot of persecution.

The Germans withdrew again three days before the Allies moved in. The first advance on the city was a small group of American in a jeep. The people of the town crowded around the jeep until it could not move. A few hours later tanks of the Third Army rolled into town. Not a shot was fired.

Even though there are many political collaborators in this city, the majority of the people are very happy that the country has been liberated by the Allies. The 153rd Finance Disbursing Section is assigned to the Third Army.

We are back in France now but I am sorry I am not permitted to tell you just where.

I have been in northern and southern England, including London. I had one opportunity to visit Scotland. Even when I was in a certain place on pass or duty, in writing about it I have to say I visited the place. So you will have to guess as to whether or not I was on pass or duty.

While on this side of the Atlantic, we have been on the move so much, not long in any place, but we may be here for a while. We are fortunate to be disbursing on our own.

So many sections in the European Theatre of Operations are assisting other sections which is worse than being on your own.

The destruction of England seems small in contrast to France.The towns here are so badly destroyed that reconstruction days will be over a long period.

A few days ago, I was on a point overlooking this fertile valley, rich in orchards and agriculture, but will be valueless for a long time until all the mine fields are cleared.

While walking along, one dares not depart from the dreams of never retreating from the roadway. Signs are posted — ‘Not clear of mines’ – then one back traces to find another route.

As I view the valley, a perfect terrain for a defensive army, I can well realize how the enemy had cleared of mines here. It certainly was wonderful accomplishments by the Third Army.”

After leaving the military, Thomas and his wife, the former Ruth Lee Curd, lived on Bluegrass Pike, most of their lives. They had one daughter, Margaret, who married Darrell Ellis.

He was a 1932 graduate of Centre College. He was an accountant and farmer. He also wrote articles and compiled cartoons for The Advocate.

Thomas  owned more than 200 acres of land in Crawford Hollow in western Boyle County where his grandparents Thomas J. and Margaret Ann Crawford lived and ran a sawmill for 10 years.

Coffee with Mimi: This and that

By MIMI BECKER Community columnist There is a local individual who comments on social media about just this and that.... read more