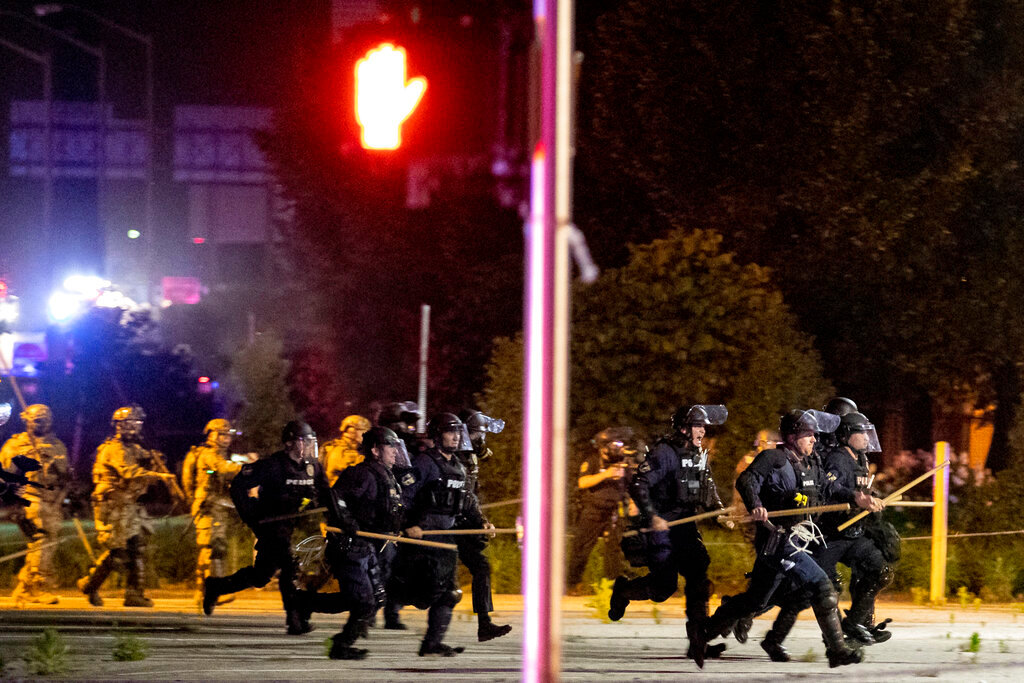 Police and Kentucky National Guard troops chase protesters as they flee toward a fence Sunday, May 31, 2020, in a parking lot at the corner of East Broadway and South Brook Street in downtown Louisville, Kentucky. (Max Gersh/The Courier Journal via AP)

Kentucky State Police will be investigating the shooting early Monday morning in Louisville by police and Kentucky National Guard troops, which left one man dead.

Louisville Metro Police Department Chief Steve Conrad told media outlets the shooting took place around 12:15 a.m. outside Dino’s Food Mart at 26th and Broadway. Police and the National Guard had been called there to break up a large group of people who had gathered at that location in defiance of Mayor Greg Fischer’s 9 p.m. to 6:30 a.m. curfew.

Conrad said while clearing the location, officers and Guardsmen were fired upon. They returned fired, killing one man whose name has not yet been released. It is also not clear if he was the person who fired the shots. LMPD officers are interviewing several “persons of interest,” according to the Chief.

Gov. Andy Beshear released a statement: “Given the seriousness of the situation, I have authorized the Kentucky State Police to independently investigate the event.”

More than 400 Kentucky National Guard members have been sent to Louisville to aid the LMPD.

Units activated include the 2nd Battalion, 138th Field Artillery based in Lexington, 198th Military Police Battalion in Louisville, 761st Firefighting Team out of Greenville, Army Aviators from 63rd Theater Aviation Brigade out of Frankfort, Communications Specialists from Joint Forces Headquarters in Frankfort and Air Guardsmen from the 123rd Airlift Wing in Louisville.

The Kentucky Guard said it will provide support as necessary to civil authorities as long as directed in order to ensure the safety of people and property.

The Guard members were sent to the state’s largest city following the violence over the death of Breonna Taylor, a black EMT worker who was shot to death at her home in March by police. Beshear has called for a full investigation of the incident.

The protests followed the release of a 911 call Taylor’s boyfriend made on March 13, moments after the 26-year-old was shot eight times by narcotics detectives who knocked down her front door. No drugs were found in the home.

There was no word Monday morning if the curfew in Louisville will be extended.