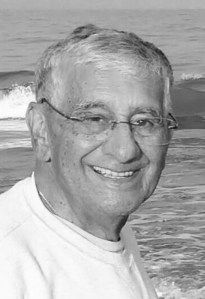 Robert Anthony Minichillo, 85, died peacefully in Danville, Kentucky on Saturday, May 30. Bob was born in Elkhart, Indiana on June 1, 1934 to Dominic and Thomasina Minichillo. Bob grew up in a large Italian family to parents who were immigrants. He is preceded in death by his brothers, Tony, Nick, Matt, Patsy (Hammer), Mike and sister Sanita.

Bob started work at the age of seven hauling big bags of flour at a bakery. He caddied at 12, and later became a journeyman meat cutter. Bob went to Elkhart High School and as a cross country and track athlete ran a four minute 30-second mile, making him one of the fastest high school milers in the state in 1954. Following family tradition, Bob served in the Army for two years.

He utilized the G.I.Bill to attend Ball State University and graduated in 1962 with a teaching degree. He was a life-long educator, retiring as principal of Elkhart Central High School in 1999. The things that brought him the most joy were spending time with his children and grandchildren, golfing with his brothers, eating Italian food, administering the Eucharist to the sick, telling a good story, and his Men’s Bible Study Group at Sts. Peter and Paul Church in Danville, Kentucky.

A funeral mass will be 10am Friday, June 5, 2020 at Sts. Peter and Paul Church with Fr. Anthony McLaughlin celebrating the Mass of Christian Burial. Burial will follow in Bellevue Cemetery. Visitation will be from 6-8pm Thursday, June 4, 2020 at Preston Pruitt Spurlin Funeral Home. There will be a Vigil Prayer Service from 6-6:15 at the start of visitation.

Bob supported many charitable causes, especially those organizations that help disadvantaged youth. Donations in Bob’s memory can be made to Piarist School, Box 369, Hagerhill, Kentucky 41222. The Piarist School is a tuition-free prep school that serves Appalachia. Or contributions can be made to Bashor Children’s Home for Children, Box 843, Goshen, IN 46527. Bashor is a residential facility serving troubled children and their families. www.preston-pruitt.com