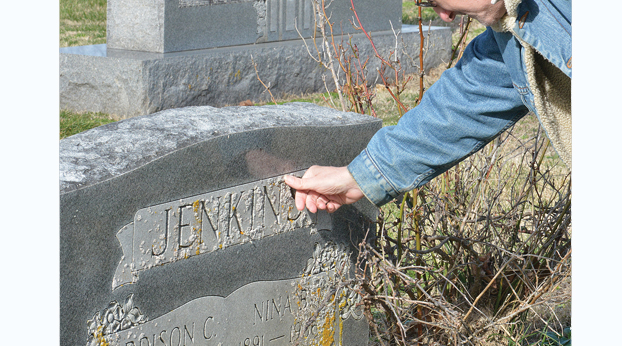 Mike Denis looks at a grave marker at Hilldale Cemetery. His personal goal is to find the GPS coordinates for every grave so that family members can easily find it. (Photo by Robin Hart) 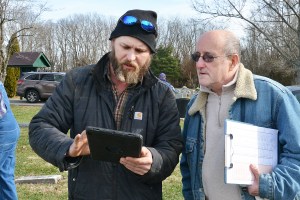 Hilldale Cemetery now has the most accurate records of burials there that it has ever had in its more than 150-year history, thanks to volunteer work and research by Mike Dennis and members of the Central Kentucky African American Cemetery Association.

Dennis said the research that he, along with Linda Raines Warren, Charles Grey, Bill Stocker, Cindy Peck and Barry Sanborn, has compiled into two spreadsheets includes:

Dennis said Danville’s records list who should be buried in the cemetery, but they didn’t show their locations. However, more recent burials in section A had been “reasonably mapped.” Other sections hadn’t been mapped for generations, he added.

The project began in January and thus far 3,642 burials in the 7.5-acre African American cemetery have been accounted for, according to Dennis.

He said he was pleased that the organization had been able to somewhat map the cemetery by section, row and graves, “even if we don’t know the names,” and that many people can “find the final resting place of their ancestors.”

However, he’s frustrated, “Because according to obituaries, death certificates and the city’s own records, there are more than another 1,300 who are probably buried in Hilldale, but have no monuments or gravestones, for whatever reason,” Dennis said.

Plus he’s frustrated because many of the records don’t show a place of burial, or list a burial took place in Boyle County or Danville. “Of course that could include Meadow Lane (cemetery) up until at least the 1950s, or even one of the other black cemeteries at that time,” Dennis said.

Another challenging aspect of mapping the cemetery was the disparity of available records. “Names are not recorded the same from record to record, and thus the search has been difficult, even in official state records,” Dennis said. “It’s a small thing, but the difference between ‘Tarrance and ‘Tarrence’ can make searching difficult and time-consuming. ‘Row,’ ‘Rowe,’ and ‘Roe,’ (all related are fun too, as well as the various spellings of ‘Doneghy.'”

There are probably more names to add to the Hilldale Cemetery list, Dennis said, because the CKAACA has 638 names that can’t be positively attributed to being buried at Hilldale.

They’re continuing to look for burial notices and obituaries in “The Advocate-Messenger” archives, Dennis said. “Prior to 1968, they were almost always listed in the segregated column, ‘Colored Notes’ rather than with the ‘white’ obituaries. And prior to about 1940, they are virtually non-existent.

Kentucky death records from 1911 to 1967 are available to the public, and the ones from 1965 back can be read online, Dennis explained. “We’re searching those name by name, working backwards, but we’re finding that many black deaths simply aren’t recorded, or if they are, we can’t find them.”

Warren is also transcribing records from the Smith-Jackson Funeral Home (Danville’s historic, predominately African American business). “When she is done, we will have one more major source of information on Hilldale and other area burials,” Dennis said.

The two spreadsheets that the group compiled list records of every identifiable grave in Sections A,B, C, D, E, and “County,” and are listed alphabetically and by location.

“Up to now, only Section A (the new section) has any sort of accurate records. If one’s relatives were buried in Section B, C, D, E or ‘County’ (75% of the 7.5-acre cemetery) there was no indication as to the actual location, requiring one to physically “mow” the entire cemetery in hopes of finding a grave,” Dennis said.

Their project was to physically locate, by section, row, and grave, all readable graves, as well as field stones and unreadable markers. “These are not all who are buried here, but we feel that at least locating the identifiable graves, we are providing a service to those buried here, and their families,” Dennis said.

On the spreadsheets, they have also included information on each person that is found on the gravestone, such as birth and death dates and even “Mother and baby,” “Father” and “Buglar”. He said the list was “reasonably accurate” as of May 31, 2020. But, there are discrepancies, Dennis added.

“Not all the people listed here are buried here. … We know of one gravestone for a woman who is actually buried at Camp Nelson with her husband.”

Now that the CKAACA has documented most of the cemetery, “We hope the city will use these records as much as possible when answering inquiries from the public,” Dennis said. They also hope the spreadsheets will be listed on the city’s website.”

If anyone can provide further information about burials we have not mapped, that information would be appreciated – to mdenis46@gmail.com, so we can produce a more complete listing.

Danville purchased three acres on Duncan Hill Road on Sept. 12, 1868, from John and Serra Bell Cowan, which was then outside of the city limits, according to Dennis. The first known burial was that of Dennis Doram in 1869 (Section D; row 11; grave 2). Dennis said that some of the stones have older dates, but he suspects they were moved to Hilldale from older cemeteries.