Question: Mr. Sampson, could you tell me anything about this stemware? I’m older and looking at cutting out things that my children aren’t interested in. My husband and I always picked up things at auctions over the years. I’m sure this is where these came from.

I’ve got 12 water goblets and 12 sherbets. All are in excellent condition with no damages. I know what you say about formal things but do you have any history or values on these stems? Thanks for looking at them. 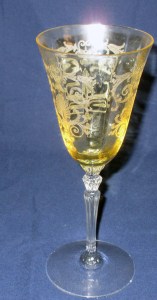 Answer: The stems that you have are by Fostoria, an American company, that was once touted as the largest and oldest glass manufacturer in the country. This statement has always been under scrutiny.

Fostoria started out as a series of small factories that merged in the early 1900s. But one thing that can’t be disputed, is that Fostoria was THE largest, most profitable glass house from the1920s to the 1940s. They stayed strong until the 1970s, riding on the popularity of a pattern called Americana.

But before this heavy, crystal clear pattern, Fostoria created many, many paper thin and delicate patterns.

It was in the late 1990s that the Fostoria company ceased production, and the company was broken up and sold piece by piece. Fostoria exists now in name only.

Your stemware is, of course, Fostoria, and its pattern is Versailles. It was meant to recreate the lavish elegance of the time of Louis XIV. It was issued in 1928 and was totally discontinued in 1944.

Issued in the following colors, rose, azure, green, topaz, gold tinted. Yours are in the topaz color with the clear stem and foot and was produced from 1931 and discontinued in 1944.

They made many items in this line such as pitchers, ice buckets, vases and everything that a young bride would need to set a proper table, in a time when this was important.

We both know what the market is like for formal pieces like these. But take heart! It’s a popular and beautiful pattern. It’s in a color that isn’t too loved though. Amber, gold and browns are just the ugly stepchild in the glassware world.

In this fast paced world, there are people who still buy the finer things. But you’ll have to search them out.

Looking online, some sources featured this pattern at extraordinary prices each. This is pie in the sky thinking and it was for the pink, green and blue color schemes. Those colors always bring more.

However, in the real world, I’d think that you’d see them in a nice antiques shop for about $10 each stem. Ask around in your family, maybe someone is there who might love them. Thank you for a great question.