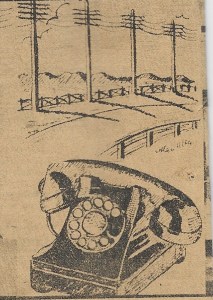 Southern Bell Telephone Company switched the old manual dial operation system to a dial operation 68 years ago, according to an article in the Danville Advocate-Messenger.

Southern Bell officials from Louisville and Frankfort were in town for the “cut-over” in September 1952. They accompanied local J.J. Isaac, group manager, and A.M. Davis, plant manager, both of Danville.

Isaacs said the new dial office, together its new long-distance facilities, provided Perryville with a greatly expanded and improved telephone service, as fine as any in the state and nation.

At the time of the “cut-over”, Loraine Watts, acting chief operator, made the connection for the final call over the manual system. The old switchboard was disconnected from the main cable and the new dial equipment was energized and placed in use.

Mayor Arthur B. Coyle made the first dial telephone call from Perryville to Boyle County Judge Sam Cheek in Danville.

Several days prior to placing the new system in operation, new telephone directories were sent to each subscriber. To avoid wrong numbers and to assure prompt service, customers were urged to dispose of their old grey directories immediately.

The new green directory contained new dial numbers, and it was suggested the informational pagers in front of the directory be read as an aid to various phases of telephone service, Isaacs said.

The change did away with the local telephone operator Allie Vanderipe, who had served the company for 35 years. Telephone officials praised “Miss Allie” for the “excellent telephone service which had been rendered under her direction in Perryville exchange during her time as operator.

As calls came in, Miss Allie transferred the calls to the local residents.

With the new system, calls went directly from the caller to the customers.

Miss Allie had “continually served the Perryville community and the telephone company with the most sincere spirit of loyalty, dependability, personal interest and devotion. Many times she served her subscribers beyond the call of duty, to help them in time of need.”

She planned to retire from active duty to enjoy many years of leisure, doing all the things in which she had been deeply interested, but had not had time to enjoy fully in the past, extraordinarily busy three and half decades.

Pet of the week: Meet Ollie