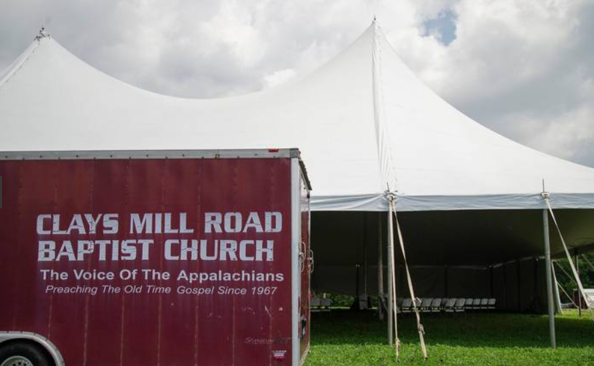 A Lexington-area church “that resumed in-person services in mid-May, and whose pastor pressured the governor to reopen churches early, is now the site of a covid-19 outbreak,” Alex Acquisto reports for the Lexington Herald-Leader.

“At least 17 congregants at Clays Mill Baptist Church . . . have been diagnosed with the viral respiratory disease,” Acquisto writes. Nine live in Jessamine County, where the church is located, and eight live in Fayette County, according to public-health officials.

“The ages of those with the virus range from children to the elderly,” Acquisto reports. “Pastor Jeff Fugate, who’s led the church for nearly 30 years, said on Friday by phone that he felt ‘terrible’ about the outbreak.” He told Acquisto, “I care more about the health of my people than anyone.”

Fugate stopped in-person services in late may after several congregants tested positive, but he told Acquisto he plans to resume them on June 21 at a “huge tent revival.” He originally planned to do that Friday, June 5, but delayed as the outtreak worsened.

Acquisto notes that Fugate joined state Attorney General Daniel Cameron for an event at which “Cameron threatened to sue Gov. Andy Beshear if he didn’t rescind his executive order preventing churches from holding in-person services.” Fugate said churches could meet in person safely.A lawsuit in which Cameron joined authorized Kentucky churches to begin holding services May 10, 10 days before Beshear had planned to let them.

Fugate told Acquisto that he has not offered Sunday School or child care, has encouraged his congregation not to shake hands and to wear masks, had his staff spread out sanctuary chairs, and limited singing to “two or three” songs instead of the usual six or seven.

Health Commissioner Steven Stack has “warned churches of the potential dangers of shouting and singing around others, since those acts release a larger amount of virus particles into the air,” Acquisto notes. “A Washington state choir practice with at least one known infected person in mid-March resulted in 53 of the 61 participants catching the virus, according to a Centers for Disease Control and Prevention study that Stack mentioned during a daily news conference in May.”