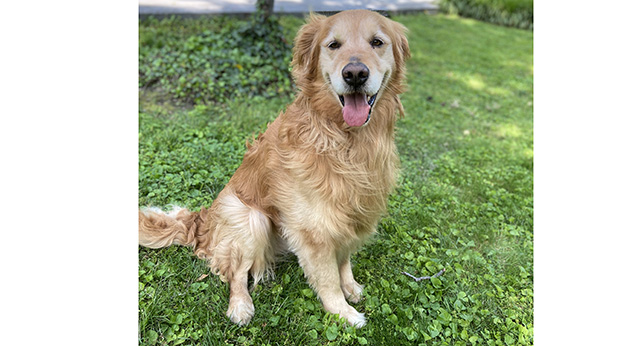 Hannah Ayers said her 8-year-old Golden Retriever, Truman, loves people and has never met a stranger. While those are loveable traits in a dog, it may have played into an incident that occurred Monday in which Truman was allegedly taken from Ayers’ backyard.

Ayers said around 12:45 p.m. on Monday, Truman was taken from the backyard of her residence in downtown Danville. Although she wasn’t home at the time, Ayers said a neighbor that was outside at the time and a gentleman who was working in her yard saw the incident take place.

According to Ayers, two women approached the kennel where Truman was located with a leash. The women parked on the next street, according to Ayers, and crossed through her neighbor’s fenced yard and across the alley into her yard to remove Truman from his kennel.

After removing the dog, the two women allegedly took Truman back through the neighbor’s yard and to their car, but with such a distance between the car and the yard where the dog was located, the witnesses were unable to provide many details about the vehicle the two women were in.

Those witnesses, who remain unnamed, immediately reported the strange event to Ayers.

“We were shocked, but we immediately reported what happened to the Danville Police Department and the Boyle County Humane Society,” she said.

After that, Ayers took to social media, posting pictures of her beloved pet and pleading with the community to provide any information they had in hopes there were sightings. Her Facebook post gained traction quickly, as people from all over the Boyle County community shared it in hopes of reconnecting Ayers with her best friend. As of Wednesday morning, the post had been shared more than 6,000 times.

Unfortunately, the attention hasn’t been enough to ultimately find Truman or the individuals suspected of taking him. Ayers said one person reported a possible sighting in Perryville, but after searching the area, they weren’t able to locate the dog.

“We have seen an outpouring of support from the community,” Ayers said. “We have had over 6,000 shares and hundreds of comments from well-wishers, sending us any information they might have. We are so thankful for all of the support but we have still yet to have any luck finding him.”

Animal theft is a crime, but unfortunately a common one. According to the Animal Legal Defense Fund, nearly 2 million companion animals are stolen in the United States every year. The American Kennel Club has been tracking pet theft reports in the United States for 13 years and noted a 31-percent increase in such cases in recent years.

As Ayers and her family keep searching for their beloved dog, she said she is begging anyone who might have seen him or has information about what happened to contact the Danville Police Department.

“Truman is an outdoor pup,” she said. “He loves being outside under a shade tree in the summer or rolling through the piles of snow in the winter. He is famous for standing up on top of his doghouse to keep an eye on everything going on in the world. He is a part of our family. We ask for his safe return and are missing him every minute of the day. If you know anything about his taking please contact the Danville Police Department.”

Churches can have 50 percent of capacity at in-person…