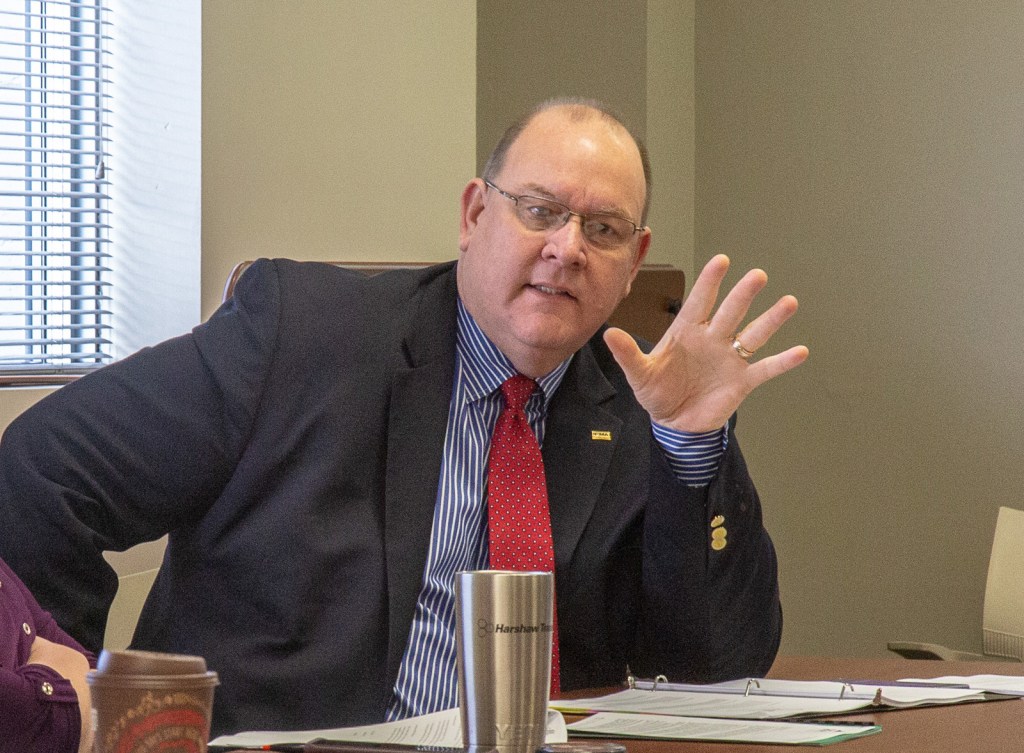 Danville City Manager David Milliron speaks during the February meeting of the Economic Development Partnership Board of Directors. (File photo by Ben Kleppinger) 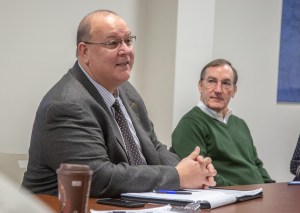 Danville City Manager David Milliron speaks during the January meeting of the Economic Development Partnership Board of Directors.

The commission met in executive session for more than two hours Friday afternoon, and upon returning to open session, made a motion to terminate Milliron’s contract, effective immediately.

Milliron was hired by the City of Danville in December 2019, previously serving in the same capacity for the City of Hogansville in Georgia.

City Attorney Stephen Dexter read a prepared statement on behalf of the city commission and said, “On Friday, June 12, 2020, at a special called meeting, the Board of Commissioners of the City of Danville made a decision by unanimous consent to terminate the employment of David Milliron as its city manager effective immediately. A national search will be initiated to find a highly qualified professional city manager to lead our city and valued employees to new heights of excellence that will make the citizens we serve proud and confident in their government.”

After the meeting, Dexter said the city manager’s employment agreement stated a full job performance evaluation would occur in June.

“Mr. Milliron was given an assessment that was recommended by the International City Managers Association,” Dexter said.

The city management team of department heads were given a similar survey to fill out in regard to Milliron’s job performance, he added.

“The evaluation process has been ongoing for several weeks. The commission based their decision upon the evaluation they themselves had of his job performance, as well as the input that staff provided within their evaluations, and collectively from weighing of those evaluations,” decided to terminate Milliron’s contract, Dexter said.

Slavin Management Consultants was the search firm the commission hired to recruit a city manager after the previous manager, Ron Scott, announced he would retire in January of this year. The cost paid to Slavin Management Consultants, of Georgia, was $15,855, and expenses not to exceed $7,500, according to a previous story in The Advocate-Messenger.

“The city is inclined to re-engage their services to begin a national search right away to find a highly qualified city manager to lead this city and its valued employees,” Dexter said.

“Slavin Group has a guarantee in their contract that if a city manager does not stay for two years for any reason, then they will provide another search for the city without any additional expense,” he explained.

“Their contract says for the first year, they will walk with the city step by step with the transition of the city manager. So, they have been engaged with the city since the hiring of Mr. Milliron,” Dexter said.

“The rate at which this happens is low,” Dexter said, referring to having someone in a leadership position who was recruited by a search firm not work out,

“It is extremely difficult for anyone with a human heart to bring themselves to a conclusion that termination is necessary,” Dexter said. “It’s one that they (the city commission) did not take lightly.”

“But they spent time to digest the evaluations that were presented to them and felt compelled to act within what’s in the best interests of the city, its valued employees and voted accordingly. … I think the unanimous vote speaks for itself.”

Dexter said he nor the commission will comment further on the matter.

Monday morning all of the city’s department heads will meet with Dexter and the city commission in order to make a plan to move forward.

Dexter said, “The board of commissioners is confident in the professional leadership of its management team and has full faith in them to conduct their business and respective departments in accordance with the approved budget and policies and procedures of the city and will empower them to do so until a new city manager is hired.”

Junction City receives FEMA grant, hopes to use it…