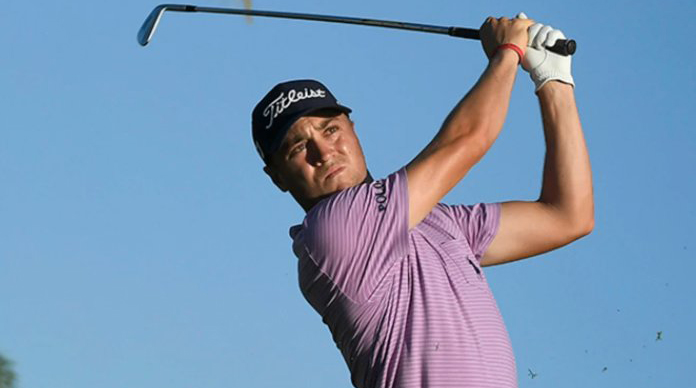 Justin Thomas is contention for the Charles Schwab Challenge title after firing a 64 in the opening round of the four-day event on Thursday. (PGA Tour photo)

Justin Thomas admitted things were different when the PGA Tour made its return Thursday but didn’t mind the absence of fans during the opening round of the Charles Schwab Challenge.

“It just didn’t take as long to kind of get into the focus and mindset that I thought it would be, but yeah, it’s just weird, you make putts, you’re kind of sometimes able to feed off of the crowd, and I’ve never been here so I don’t know what the big holes are.”

The Louisville native and graduate of St. Xavier High School spent the first months of the COVD-19 pandemic focusing on his “body and getting rested” but then began practicing during the last three weeks to prepare for the remainder of the season.

“I just tried to not overdo it because I knew it was a long time off, and I didn’t want to do too much because I’ve never had this opportunity of taking this much time off so I wanted to use it to my advantage so once I did get out here I was hungry again and I was ready to go,” he said.

Thomas fired a 68 on Friday and remains in contention for the title going into the final two rounds. Thomas began the second round two shots behind co-leaders Justin Rose and Harold Varner III.

For Thomas, just being on the course again was rewarding.

“It’s a lot more than just fun seeing people you haven’t seen in a while, seeing wonderful faces like yours,” he said. “It’s been so long. But no, it’s great seeing the guys and being out here and knowing that when you have a six-footer it does matter if you make it or not as opposed to just losing a little bit more money in a fun game with your buddies at home, or if you do hit it in the water it actually does matter dropping it in the correct rules of golf instead of just kind of zipping around in a three-hour round in a cart.

“It’s good to be back out, and I’m sure once the next couple weeks get going, it’ll feel more normal.”

In the opener, Thomas was paired with Rickie Fowler and Jordan Spieth.

“It was great,” he said. “Obviously the last competitive round I had was with them at THE PLAYERS. So it’s nice to see them again. I’m sure Rickie is sick of me, and we’ve definitely had our fair share of time together, and staying in the house, so we definitely have our doses of each other. It’s always fun playing with those guys. Probably made it better with no fans and hanging out with them.”

In the second round, Thomas hit 13 of 18 greens in regulation and didn’t miss a putt within 10th feet of the hole. He birdied No. 6 Friday and is 8-under going into the third round.

Prior to the shutdown, Thomas finished in a tie for sixth in the World Gold Championships in February and won the Presidents Cup in December and opened 2020 by capturing the Sentry Tournament of Champions on Jan. 5.

2020 graduates: we celebrate with you