Question: Good Morning Jerry, I was interested in getting an appraisal done on an antique doll that has been passed down to me from my great-grandmother. Is that something you are possibly capable of doing? 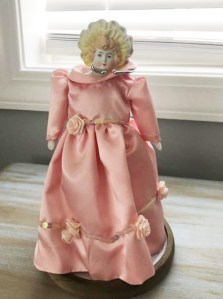 Answer: What a sweet face she has. I get a lot of questions about dolls, and frankly, most are just newer “collectible” dolls.This is certainly an older doll.

You have a Hertwig & Company doll. Hertwig had a long German history. Hertwig & Company was founded by Christoph Hertwig and Johann and Benjamin Beyermann. They produced porcelain and earthenware objects in their factory in Katzhütte, Thuringen, Germany from 1864 to 1941.

Of course, the year 1941 is important, as virtually every German factory was destroyed after WWII. The company ceased production at that time.

Doll head production was first mentioned in 1884. They were famous for their line of snow babies — these are the old snow babies and NOT the modern versions and Nanking dolls, which is what you have.

Nanking dolls have tightly stuffed cloth bodies. The name Nanking, comes from a type of finely woven cotton fabric that was imported from Nanking, China, hence the nickname

Your head is what’s called a “character” doll. With her flower bonnet, she was part of a line of dolls that were created around flowers.

She dates to about 1900. So, she was new when she was given to your great-grandmother. It’s a nice doll but not a great one. Sadly, someone re-dressed her in the 1960s in a modern fancy dress.

You can tell this by the use of an over the top style, and just cheap fabric. The doll market is so soft for average dolls. However, the really, really fine and blue chip dolls tend to hold some of their value.

She has such a pretty face. I hope you enjoy her because she was treasured by your great-grandmother.

In this market and being re-dressed, it might be priced in a retail store, for about $50. Thanks for sharing her with us.