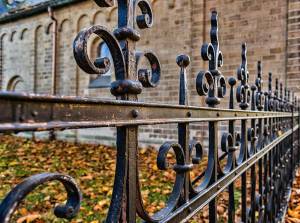 When choosing the materials for gates and fences, there are probably two most common materials that decorators and homeowners choose from: wood and metal. And about 80% of the time, metal wins that wager.

It does not come as a surprise that people opt to use metal when it comes to the things they use around the house a lot of times. Who wouldn’t when a lot of benefits come along with using it? First, the material is more malleable than wood, and it requires less maintenance and may outlast the latter more than twice in its lifestyle.

However, metal is not just metal, just like wood is not simply wood. It comes in various types and composition, hence, it presents a wide selection of how you can turn it into something useful. For homes, the top choices are aluminum, wrought iron, and cast iron. However, the latter two, most of the time, come interchangeably which should not happen as they come with vast differences.

Without a doubt, both wrought and cast iron are by-products of iron. However, they have seas of differences between them that make both materials great, but for different purposes.

Fundamentally, the production of wrought and cast iron differs from one another. The former is produced by heating iron and then shaped or re-shaped with tools. From the name itself, wrought means worked on, or as an adjective, it means that it is shaped by hammering. The latter embodies “casting,” hence the name, which means it iron has been melted, poured into a “cast”, and then solidified.

Since wrought iron can be shaped by heating and re-heating, it does not come as a surprise when we say that it’s more malleable than cast iron. At the same time, since it is tempered from heating and cooling down, it always comes stronger. Therefore, it often comes as a top choice when choosing materials for iron fences and gates.

Things to Consider Before Buying Wrought Iron for Fences and Gates

Before jumping into the car and drive to the nearest depot, read the list below to know that the purchase is the perfect one:

The top reason why people opt out of using metals for house stuff is rusting. However, over the past years, with the rise of custom made metal furniture suppliers, it deems untrue.

Still, there are a lot of factors that hold people back. Probably, the terms are so specific that a simple layman would have a hard time understanding its meaning. Here are some rust-protection terms that are often found in the specifics and are important for first-time buyers:

Galvanization is honored as the perfect choice when it comes to rust protection as users attest to it. It is the process of applying layers of zinc to iron to produce a corrosion-resistant wrought iron.

A technique that has been around since 1742, hot-dip galvanizing process is thought to be the most effective. With this process, every nook and cranny of the surface both inside and inside, which is why it is preferred most of the time.

It involves immersing the iron or steel for treatment in a bath of molten zinc which covers the wrought iron with multiple layers of zinc-iron alloy and zinc metal. Hot-dip galvanizing works with almost any kind of metal including the ones used for custom made metal furniture.

The spray-on galvanizing procedure uses an applicator, most often in a form of a mist sprayer or handgun applicator. Then, it projects tiny particles of molten zinc onto the abrasive surface. While it is not really a particular choice when it comes to galvanizing, it is used in circumstances where the wrought iron (or any metal) is too large for the zinc metal bath, or would for projects that would disintegrate during the process.

Probably the most popular method of assembling metal together is by welding two pieces together. However, admittedly, it is not the best way to go. It can easily be forced out of shape or become loose as soon as rusting form. Not to mention, it would look tacky and forced.

Some constructors also resulted to using screws and nuts to keep metals together, but it certainly is not made for that purpose as it can not only scratch the metal, it can also be the source of rusts as soon as the rain starts pouring.

If given a choice, look for ones where both pieces of metal are “made for each other.” By that, it means that each one is constructed for the other. An example would be a metal with a hole so that the other part can easily slide in first before welding them together.

When it comes to gates and fences, it pays to give extra attention to small details. Aside from adding to the aesthetic value of the gateways, it is something that holds the panel up. There are a lot of lines that use stamped steel collar as fence brackets which may not be the best idea. It does not only look cheap, it also leaves gaps in between the railing and the post which does not make them straight.

However, there are a lot of brands that offer screws and brackets as fence posts. The pair basically does the same job but in a more secure and aesthetically-pleasing manner. Who does not love the Victorian-age appeal it gives?

Another hardware that often does not get the same attention as the rest of the parts. Constructors tend to choose ones that are on the lower end of the spectrum and ones made from inexpensive materials such as plastic or aluminum and glue it on top. While it seems like a wise choice, it does not fit the rest of the aesthetic and would probably end up getting broken while the rest stands tall.

If possible, pick ones that are made of cast iron or wrought iron. It can easily be welded with the rest of the gate, and would probably last as long as the fence would. Not to mention, it adds a nice texture and beauty to the gates.

Wrought Iron as Gates and Fences

Without a doubt, wrought iron makes a great material for gates and fences. With its strength and durability, it ensures the safety of anyone on the other side of the fence. At the same time, it saves a lot of cash as it does not require regular maintenance as wood or other materials would. Aside from that, wrought iron would last a lifetime as well.

Sponsored content Shieldcoart.com The first thing that prospective customers notice for on-site businesses is not their company name, logo, or... read more