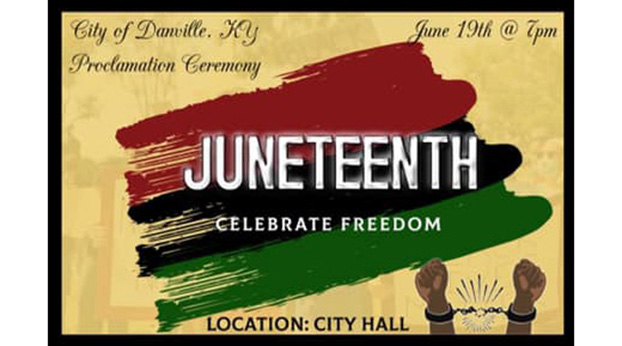 Juneteenth is an annual holiday commemorating the end of slavery in the United States, and this year, Danville Mayor Mike Perros will read a proclamation to honor and recognize the holiday.

Melinda Weathers, one of the leaders of United For Change – Danville, was key in organizing the proclamation ceremony. She said there have been some events planned in the past to celebrate the day, but there hasn’t been a proclamation that she is aware of.

Weathers said that the ceremony is a “step in the right direction” and a great show of support for the community.

“I’m very proud that our community is making an effort to acknowledge when African-Americans were freed from slavery,” Weathers said. “I think that’s significant in the climate that we are in and I think it shows another level of support for African-Americans, Black Americans right here in Danville and Boyle County. It’s a step in the right direction. Is it going to solve all the world issues? Absolutely not. I do think it will start to lend itself to good conversations and open dialogue about the support needed within our community and ways that you can show that support.”

Weathers said the recent protests and community forum have been great, but she and others want to see action taken also. She believes that this ceremony will be one step toward that.

The program will include an explanation of the meaning and importance of Juneteenth by Weathers, and will also include a song by Danville resident Justin Doneghy, along with the proclamation.

Weathers said that social distancing guidelines will be practiced and those planning to attend are encouraged to wear masks.

Weathers also said that the local NAACP has volunteered to financially support an American Sign Language Interpreter for the ceremony.

“We’re really thankful for that,” Weathers said. “We want to do all we can to have this service available for anyone who comes to be able to participate. I’m really excited about that.”

In the future, Weathers said, she hopes that the celebration will grow as more people and organizations become involved. Weathers said this event will serve as a “kickoff to events in the future.”

Weathers said she has been in communication with Heart of Danville, and those who attend the proclamation ceremony will be encouraged to make their way over to Weiseger Park for the pop-up cafe that is planned.

“We’re going to encourage people to trickle on over after the proclamation, which should only last about 30 minutes and support those local businesses,” Weathers said. “We want to try to merge these things together and get people involved with what they’re doing, too.”

Juneteenth is an annual holiday celebrated on June 19 to commemorate the abolition of slavery in the United States. The date is approximately two months from when Confederate Gen. Robert E. Lee surrendered at Appomattox, Virginia, signaling the end of the Civil War.

June 19 is a recognition of the day when Union Gen. Gordon Granger arrived in Galveston, Texas, to inform enslaved African-Americans of the end of the war and their newfound freedom.

Although President Abraham Lincoln signed the Emancipation Proclamation on Jan. 1, 1863, the proclamation had little effect in many areas such as Texas because of the lack of Union troops to enforce the new executive order.

According to Juneteenth.com, the Juneteenth celebration “was a time for reassuring each other, for praying and for gathering remaining family members.”