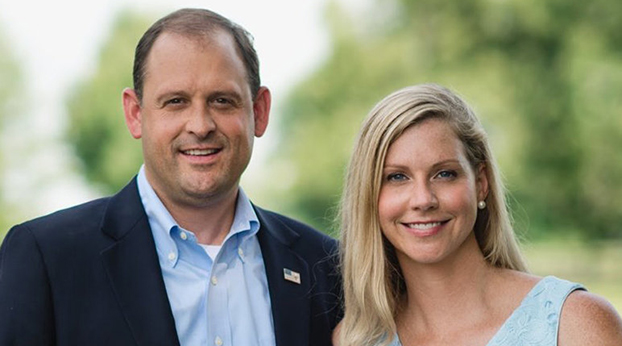 Carol Leavell Barr, the wife of U.S. Rep. Andy Barr, passed away suddenly Tuesday at the family home in Lexington.

“During this tragic time, we respectfully ask for privacy for Congressman Barr and his family to grieve Mrs. Barr being called home to heaven,” a statement released from Barr’s office said Tuesday night.  She was 39.

According to the release, Barr “may release a more detailed statement at a later date, but right now is solely focused on being a father to his two beautiful daughters.”

Mac Brown, the chairman of the Republican Party of Kentucky, said “our hearts go out to the Barr family at this tragic news.

“While there are no words that can heal the pain of losing a loved one, we pray together that God will comfort Congressman Andy Barr, their daughters, and the entire family through this very difficult time,” Brown said.

Gov. Andy Beshear expressed condolences on Twitter.
“Britainy and I are heartbroken for U.S. Rep. Andy Barr and his family tonight at the sad news of the unexpected passing of the congressman’s wife, Carol. We are praying for the Barr family.”

“Elaine and I are stunned and heartbroken at the news of Carol’s passing. Her warmth filled whatever room she entered and her contributions made Kentucky a better place for all of us,” he wrote in an email. “And to Eleanor and Mary Clay, Carol was a wonderful role model and source of constant love. We send our sincere condolences to Andy, their family and his staff at this terribly painful time.”

Amy McGrath, Barr’s former opponent in the Sixth Congressional District, said she would have Barr’s family in her prayers.

“My heart goes out to Andy and his two daughters over the tragic loss of Carol,” she said. “While we were political competitors, we are Kentuckians first,” McGrath said. “I hope they feel the love of many and we wish him great strength during this very trying time.”