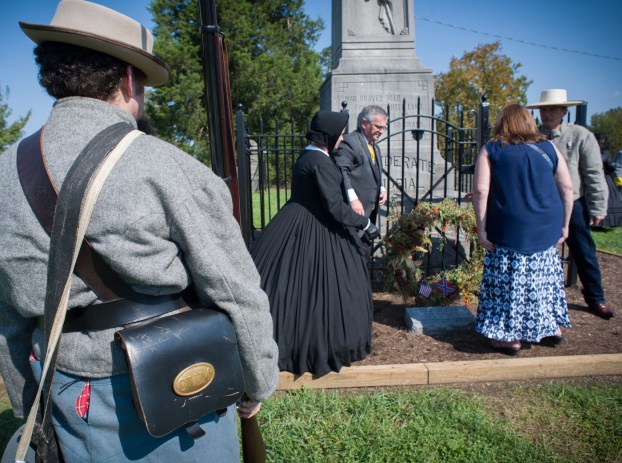 Dignitaries place a wreath at a Confederate monument at Perryville Battlefield during a memorial service.

A local police chief says people do not need to show up with firearms, or otherwise, Friday to “protect” Perryville Battlefield. A social media post that circulated quickly late Thursday afternoon stated a call was made to the battlefield, threatening a “riot” planned to destroy Confederate statues.

One woman who posted the claim was contacted, and would only say an employee of the battlefield received the call, which has not been confirmed.

Battlefield director Bryan Bush could not be reached for comment.

But Perryville Police Chief Parker Hatter, along with other local officials say so far, there is no credibility in the post.

Late Thursday afternoon, posts began being shared by people asking their “brothers and sisters” to show up in solidarity at Perryville Battlefield State Historic Site. The posts claim someone received a phone call from an unknown group notifying them they would be at the Battlefield Friday, in order to tear down some Confederate statues.

Even though local law enforcement say no word has been returned determining these are credible claims, some are saying people in the area are reacting to the claims tensely.

Chief Hatter said some have told him they will go to the battlefield with guns to defend it, “and I’m telling everyone to stay home. We don’t need this. What we do not need are people showing up at the park with guns. We’re not going to have looters, burning down the town.”

Not to mention, Hatter says he doesn’t know of a situation where a group would be working to tear something down illegally, and make a phone call notifying them of their plan a day ahead.

Hatter says from his end, it’s all been stemming from social media. There were even a few videos posted, with people making the claims of what they’d heard, but no sources are noted on any posts.

Hatter was told the park’s director received the phone call, but hasn’t heard back from Bush yet to confirm.

“I know he’s reached out to KSP (Kentucky State Police) …” and possibly the state parks agency to make them all aware of what’s circulating.

Hatter says posts are claiming the group will hit Mill Springs Battlefield in Nancy, then head to Perryville Battlefield.

Boyle County Sheriff Derek Robbins agrees with Hatter’s assertion. He doesn’t think there’s any riot planned, but talks have been held in case something progresses into property damage.

“We’ve contacted the Fusion Center, they monitor social media and things like that, that could be perceived as potentially turning into something,” Robbins says. The Kentucky Intelligence Fusion Center is part of the Office of Homeland Security.

“At this point, we’re not thinking anything’s credible. We’ve been discussing it, and we will have people available, but I don’t think it’s credible that they will have busloads of people and tear down statues.”

Robbins says it’s anyone’s right to assemble peacefully to protest. “If they want to show up and chant and have signs, that doesn’t bother me a bit, it’s their right. But damaging property — that’s a different story. They’re no longer welcome there.”

Hatter also says any groups who want to peacefully assemble for any reason are always welcome in Perryville.

“If they want to protest peacefully, that’s everyone’s right as an American. But we are making preparations” in case it turns into anything more, Hatter says.

“And no, we do not need people showing up with guns, to protect the park. We don’t need a full-scale riot going on. If the protestors show up, fine, get their message out and they leave. We don’t want to throw fuel on the fire. We don’t need the national media coming in here over Perryville, Kentucky.”