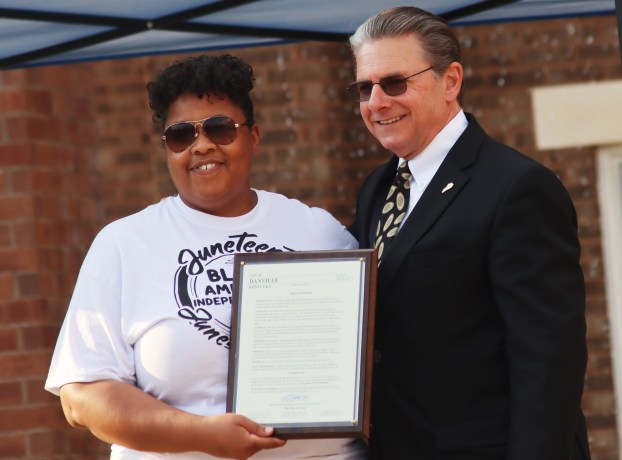 Melinda Weathers, left, and Danville Mayor Mike Perros display the proclamation that declared June 19 Juneteenth in the city of Danville during a ceremony at Weisiger Park.

That was the chant of more than 100 local residents Friday night at Weisiger Park following a proclamation ceremony in which Danville Mayor Mike Perros declared Friday, June 19 as Juneteenth in the city of Danville.

Juneteenth is celebrated each June 19 to signify the end of slavery. Juneteenth recognizes the day in which Union forces made their way into Galveston, Texas on June 19, 1865 to read a federal order that all enslaved individuals in the state of Texas were now free.

Melinda Weathers, one of the organizers of the ceremony and a member of the group United For Change Danville, said she reached out to Perros and the two went to lunch. One of the things Weathers wanted to do was have an official city proclamation recognizing Juneteenth, which Perros agreed to.

The ceremony also included a song by local resident Justin Doneghy and a special performance of “Amazing Grace” on a Native American flute by Lydia Ellis.

Weathers said she hopes to continue to build on the ceremony moving forward with other community events and an even bigger proclamation ceremony to celebrate Juneteenth next year.

The proclamation ceremony was held in conjunction with Heart of Danville and the Boldly Resilient Pop-Up Cafe at Weisiger Park.