Question: Good afternoon Jerry. Here is the watch that I was telling you about. I got it for my 10th birthday and that’s been almost 70 years ago. It’s in good shape but the other half of the band is missing. It hasn’t run in years. What can you tell me about it?

Answer: I’ll bet this was one of your favorite gifts that year. It’s a great watch. 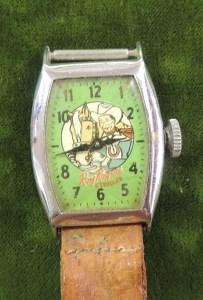 For readers who don’t know, Roy Rogers and his trusty steed, Trigger, were cultural icons, in the 1950s. Born as Leonard Franklin Slye (1911 – 1998), he was labeled as the “King of the Cowboys.” Roy Rogers was an American singer, actor and radio and TV host. He appeared in more than 100 feature length movies and numerous TV and radio shows.

He was often accompanied by his wife, Dale Evans, and a whole host of friends, horses and dogs.

Needless to say, he had an amazing career in Hollywood. And, what do you get if you’re that successful in Hollywood, for that long? You get merchandise.

They made everything with the name and / or likeness of Roy Rogers — books, comics, boots, toy pistols, toy rifles, hats, PJ’s, and watches. In researching for  this article I found there were at least seven different watches made, even a pocket watch. Because, what little boy didn’t want a pocket watch?

Your watch was made by the Ingersoll Company. Ingersoll manufactured nice watches but

they excelled at character watches, like Roy, Mickey Mouse, Cinderella and many others. This watch will date to the early 1950s.

Now, you have condition issues with your past birthday gift. The dial and crystal are really fresh and bright. You must not have worn it much. However, you don’t have any box or its paperwork,  and the other missing half of your band. That last one is pretty severe.

Another factor affecting this watch, and others like it, is that the generation that idolized Roy Rogers and his gang, are fading away. Characters don’t last forever.

No box, but a nice watch, it might be about $75. Yeah, boxes and papers mean that much. Your watch with its missing half of a band, might be priced in an antiques shop, for about $20. Thanks for a great question.

Life with a smile: Bonding over board games

By KATE SNYDER It finally happened. The moment I have been waiting for since my children were born.  The four... read more