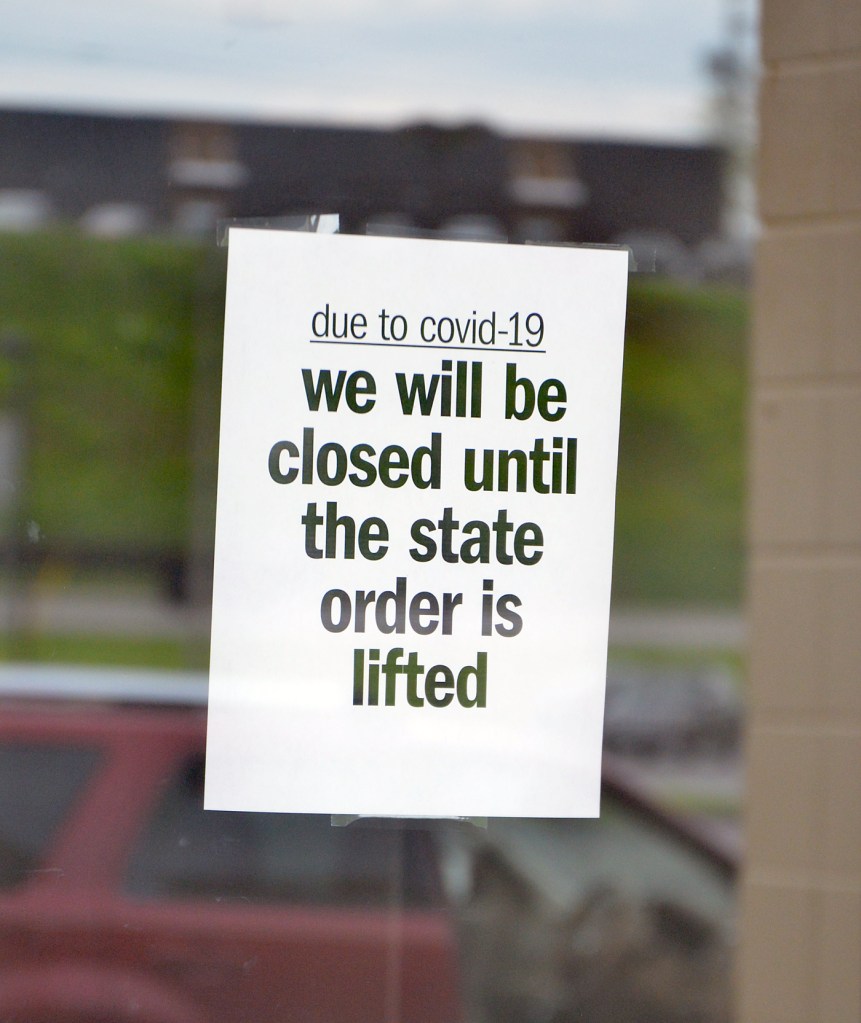 A sign on the door of Gordmans in the Danville Manor Shopping Center is just one of many found on the doors of local businesses over the past weeks following the arrival of COVID-19. The parking lot of the shopping center and other businesses in town are empty. (Robin Hart Photos)

Gov. Andy Beshear announced 90 new cases of the coronavirus on Monday and for the first time in weeks, no new deaths.

“For somebody who has read genders and ages and counties knowing that each one of them is a loss of now 526 Kentuckians, to have no reportable deaths today is special,” Beshear said. “We are very grateful and blessed that at least for a day there is a reprieve from a virus that is aggressive and can be deadly.”

As the state gears up for the final phase of reopening its economy next week, Beshear said the numbers support it. He said the state continues to be on a manageable plateau when it comes to new cases, and the state has plenty of hospital beds and intensive care unit beds available, noting that  hospital occupancy is around 50 percent and its intensive-care capacity is around 70 percent.

That said, he also cautioned that any future success to keep case numbers down as people’s contacts continue to increase will depend on a commitment from Kentuckians to follow the rules, especially social distancing, hand hygiene and wearing a mask.

“I have some concerns that as summer wears on, that fewer people are going to follow them,” he said. “I’m not seeing nearly the amount of masks we need to. . . .  And so I am concerned going forward that if we don’t follow these rules to the best of our ability, then we will certainly see an increase.”

On Monday, June 29, Kentucky bars and restaurants can open at 50 percent of capacity; groups of 50 people or fewer can gather; and public swimming, the Kentucky Kingdom amusement park, wedding venues and event spaces will be allowed to open in some capacity.

“Please remember that given that we are seeing spikes in many states that opened much faster that we did, our ability to do all of this, to see each other . . . all that’s dependent on whether we can adapt, on whether we can do what it takes moving forward or do we just fall into old patterns,” he said.

Beshear asked Kentuckians to consider a “rule of 50 percent” as a new rule for their lifestyles until we get a vaccine.

“Fifty percent of what you would normally have done is what you ought to be doing on any given day,” he said. “If we can do that . . . I feel like we will be in the right place to make sure we can continue our reopening without seeing what we have seen from some other states.”

Health Commissioner Steven Stack, a physician, pleaded with Kentuckians to wear masks, noting that the lack of compliance for this guidance has caused him and fellow health officials from other states to be “universally frustrated, challenged, [and] at times despondent.”

“This is a big deal. These little things are cheap, they are simple and they make a big difference,” he said. “So either to keep yourself safe, or someone you care about or love, or to keep others safe, please use cloth face coverings whenever you are near other people. It is simple and it can help us to be able to keep things open if we comply.”

Asked about suggestions by President Trump and other Republican politicians that rising case numbers are a function of increased testing, Beshear said: “We are not over-testing. We can’t test enough. The more we test, the more we can contact trace. . . . If we could test everybody in the Commonwealth of Kentucky today, we could prevent the spread of this virus at least with regards to people in Kentucky significantly.

“There may be some that wouldn’t register on the test just yet, but the more you test, the more you can do to mitigate the virus. We want more testing even than we have right now, and if everybody in the commonwealth were willing to get tested every two weeks, there is just almost no limit to what we could do in terms of reopening and how safely we could do it.”

As of Monday, 352,215 tests had been administered in Kentucky.

Beshear said he will announce a comprehensive state plan to reopen schools on Wednesday. He called it a public health document and said it will include some expectations as well as some very strong suggestions.

Beshear cautioned that the “Healthy at School” plan will require schools to look different, because otherwise it won’t be safe. “I need people to keep an open mind and to understand when we come out with this guidance, it is to protect our children,” he said.

The recommendations will say that if students can’t stay six feet apart, they will be expected to wear masks, Interim Education Commissioner Kevin Brown said.