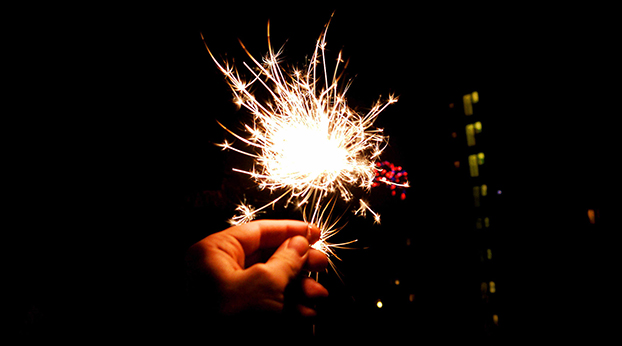 With the approaching Fourth of July holiday, fireworks tents have popped up in parking lots around town selling everything from small packages of firecrackers and sparklers to enormous boxes containing a variety of items that explode and light up the night sky.

Interim Danville Fire Chief Doug Simpson said people should be cautious when lighting up even the most simple fireworks. Better yet, just go to a professional event, like Danville’s firework show, which has been “un-canceled.” It will be held at dusk on July 4 at Millennium Park, “Just like we always do,” Simpson said.

Simpson said, “The city council wants to have a sense of normalcy,” and having its annual fireworks show is one way to do that.

However, if people have their hearts on lighting up their own fireworks, Simpson said, “Keep good social distancing, be safe and use good common sense.”

Sparklers can be dangerous in the hands of young children, Simpson added. They can reach up to 1,200 degrees and burn little faces and hands. Glow sticks are much safer for them to swirl around after dark, he said.

In a news release from the National Fire Protection Association, it stated that an estimated 19,500 fires were started by fireworks in 2018, including 1,900 structure fires, 500 vehicle fires and 17,100 outside and other fires.

And, according to the U.S. Consumer Product Safety Commission, U.S. hospital emergency rooms treated an estimated 9,100 non-occupational fireworks related injuries; and burns accounted for 44% of the fireworks injuries around the month of July 4, 2018.

Simpson said there are several safety tips that people should practice this year if they set off their own fireworks.

Danville also has a fireworks ordinance that the public should abide by.

“Please, please, please, those of you who have neighbors, please be mindful of them as you do your own fireworks,” Danville Mayor Mike Perros said. “Many people have to get up early and carrying fireworks late into the night is certainly illegal, but it is even more unacceptable. I’m just asking everyone to be a good citizen to your neighbors.”

Council member Rick Serres said, “It’s one thing to bother my rest, but if I have a dog that can’t stand fireworks, and they’re going crazy at 11 at night, that’s tough on everyone,” Serres said.

While area residents look forward to enjoying a Fourth of July fireworks display this year, especially after being cooped up during the recent coronavirus pandemic, many dog owners are disappointed and dread the nights when neighbors shoot fireworks this time of year.

Director of Boyle County Animal Shelter Christina Lombardo said many dogs become upset when they hear fireworks explosions so there are a few things their owners can do to help their pets remain calm.

Lombardo said the best option is for pet owners to stay home with their dogs during a fireworks display. And to help keep the dog’s mind off of the loud noise, they can be distracted with a new chew toy or one filled with peanut butter or treats.

You can also put your dog in a room where they feel safe and shut the door, and maybe even play some music, Lombardo said.

It’s also a good idea to take a walk or exercise your dog during the day so that they’ll be more tired at night, she suggested.

As a last resort, an anti-anxiety drug can be prescribed by a veterinarian, she added.

Dogs have a tendency to run away when they’re scared of the loud noises during the Fourth of July celebrations, therefore it’s important to have on a collar with their identifying county dog tag attached, if they aren’t already microchipped, Lombardo said.

Every dog in Boyle County is required to have a tag, which goes on sale on July 1. They can be purchased at the animal shelter, Mondays through Fridays from 1 to 4 p.m. and at the Boyle County Judge-Executive office at the courthouse during business hours.

The cost is $5 if the dog has been spayed or neutered, and $10 if they haven’t been fixed, she said.