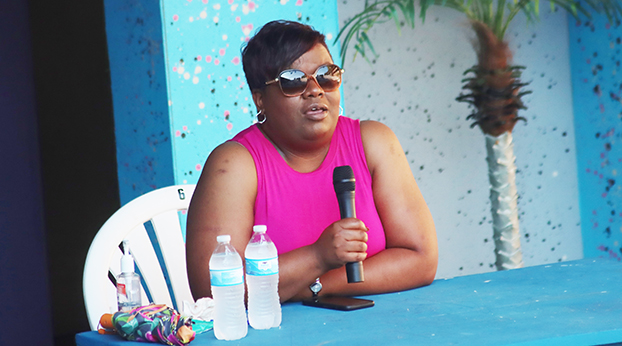 Cheryl Burton, the moderator for the forum Thursday night, speaks to a gathered audience of 75 to 100 people at Pioneer Playhouse. 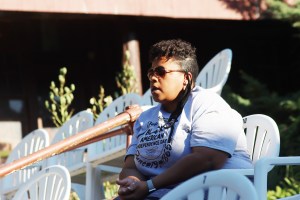 Melinda Weathers, one of the individuals involved with the Danville United For Change group, speaks at the forum Thursday night.

Between 75 and 100 people gathered outside at Pioneer Playhouse Thursday for a community forum to talk about changes they want to see in the community.

“The demands listed below represent collective efforts by Danville citizens to address inequality in our city,” the document reads. “We demand real change now. Change that increases transparency in policing and city government decisions. Change that calls for fair treatment in healthcare and banking. Change that molds our young people. Change that’s led by the citizens of Danville. Let’s set the standard in the state. Let’s show why we are a city of firsts.”

One of the topics that drew interest at the forum was the creation of a citizens review board for local law enforcement. Citizen review boards have begun being formed in larger cities across the country in recent years, and are generally described as a municipal body composed of citizen representatives charged with the investigation of complaints by members of the public concerning misconduct by police officers. Such bodies may be independent agencies or part of a law enforcement agency. The makeup of these boards vary in each city or county.

Among the demands outlined by the group on Thursday is the creation of a citizens review board for public safety departments giving citizen oversight to complaints and misconduct accusations against Danville Police Department and Boyle County Sheriff’s Office.

This board, according to the document, would also approve an independent company to review complaints and personnel files from the Boyle County Sheriff’s Office as well as approve a third-party to provide implicit bias training for local law enforcement officers.

One person in the audience asked Burton how the board would be established.

“Hopefully get people from the community that would want to be part of it,” Burton said. “Just everyday people. We don’t want people that can pad their pockets with money or do favors for them. We want people who actually want the best for the citizens of Danville and Boyle County.”

Other demands outlined in the document for law enforcement include a review of no-knock and lethal force policies, addressing issues with racial profiling, providing body and dash cameras for all local officers, and strategic recruiting to attract diverse deputies and officers, among other things.

Education was also a topic that was discussed. Among the demands listed in the document regarding education are annual unconscious bias training for educators and staff, reviews of social studies and history curriculum responsible for “ensuring a robust curriculum that accurately teaches history of this country, including adequate learning surrounding American slavery and civil rights”, the creation of a summer enrichment program for marginalized youth with a STEAM (Science, Technology, Engineering, Arts, Math) education approach, a strategic approach to attracting diverse teachers, and a commitment from local boards of education to diversify athletic head coaching.

Burton said she is going to keep pushing for the mascot to be changed, which drew several voices of approval from the audience.

With healthcare, demands included a strategic recruiting and incentive plan for attracting diverse doctors and medical professionals, as well as creating a diversity and inclusion board at Ephraim McDowell Hospital and annual unconscious bias training for all medical staff to ensure healthcare equity for all patients.

The group also outlined a plan for a diversity council that would advise the mayor and board of commissioners on diversity and inclusion strategies and initiatives.

This diversity council would be responsible for holding organizations accountable for ensuring diverse representation on leadership boards and curating cultural experiences in the city of Danville such as securing Black history monuments and signage at various places in the city as well as creating public art such as murals, street art, etc.

One topic that was brought up was possibly painting a phrase such as “Black Lives Matter” on a street in the city, much like what has been done in other cities across the country. This would likely be on Second Street. The idea of renaming Second Street was also brought up as something that could possibly be brought before city leaders.

One idea that was brought up consisted of posting flags on light poles in town with a slogan such as “Black Lives Matter” and recognition of important figures in Black history in Danville. Several members of the crowd were vocally supportive of presenting these ideas to city officials in the near future.

Economic development was also mentioned, including a multi-functional public space for youth under the age of 21, as well as small minority business loans and resources for rising entrepreneurs, financial literacy workshops, and an increase to the minimum wage.

“We want Danville to be the best small town in America for Black, Brown, poor, and marginalized people too,” the document stated.