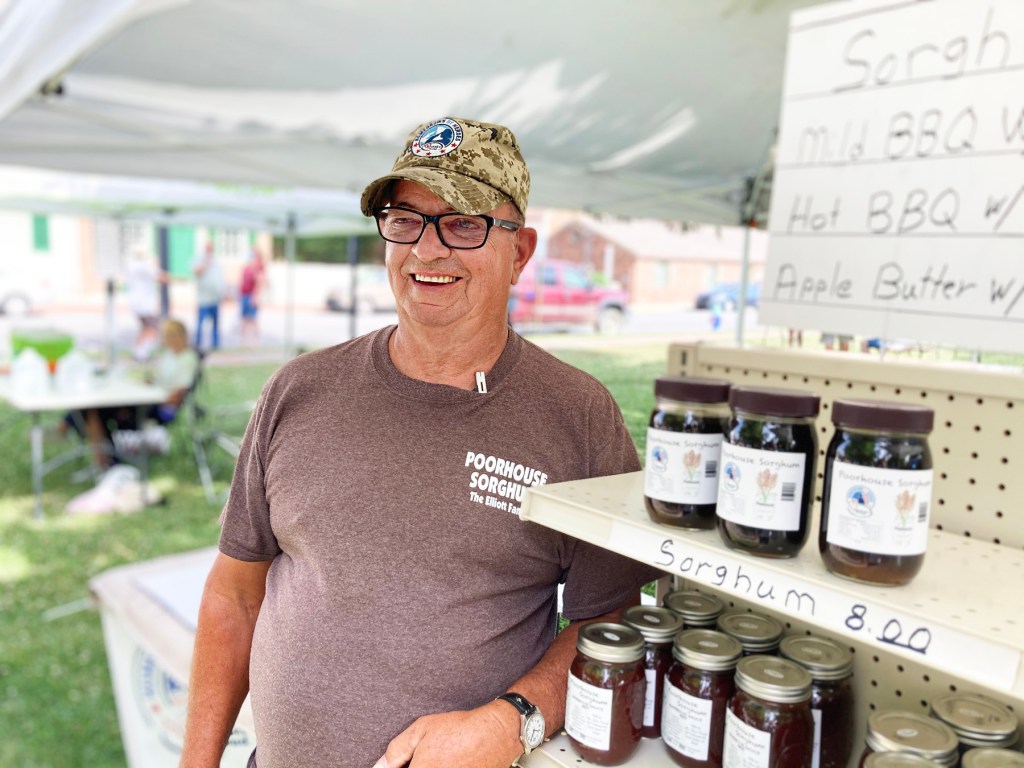 Jimmy Elliott sells his all natural sorghum at his booth at the Boyle County Farmers Market on Saturdays. He raises the sweet sorghum crop on his farm in Gravel Switch.

Jimmy Elliott is a “super grain” farmer who grows his sorghum crop to produce sweet sorghum syrup for toast and biscuits. And now he’s using his sorghum to sweeten and flavor his brand of barbecue sauce and apple butter.

Sorghum, referred to as a “super grain” is one of the top five cereal crops in the world, according to the website sorghumcheckoff.com. “Sorghum is truly a versatile crop that can be grown as a grain for cooking, forage for livestock and sweet crop for syrup.”

For those who aren’t familiar with the sweet, sticky natural syrup, sweet sorghum plants look similar to corn, and are harvested for the stalks rather than for the grain they produce.

According to the website, the stalks are crushed to produce the syrup. “Today, sweet sorghum is used as a healthy alternative to sweetener to produce whiskey and rum type products and for biofuel and chemical production,” the website states. And at one time, sweet sorghum was the predominant table sweetener in the U.S.

Elliott grows sweet sorghum on his farm in Gravel Switch where he crushes and cooks the all natural syrup. He also adds his sorghum to the mild and hot barbecue sauce he sells at the market.

And for the first time this year, he has mixed his sorghum into apple butter to expand his Poorhouse Sorghum line.

But sorghum isn’t the only feature that can be found on his farm.

At the Boyle County Farmers Market recently, Elliott held out his weathered-hand and showed a couple of shoppers the flint arrowhead he found when plowing his field. “I find one about every year,” Elliott said laughing. 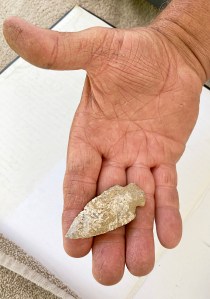 Jimmy Elliott holds an arrowhead he found this year while plowing his field.

Directions: Mix together shortening and sugar and beat in eggs and sorghum. Add flour, soda and spices. Mix thoroughly. Chill dough for a few hours or overnight. Roll into balls about the size of a walnut and dip top in sugar.

Place on an ungreased cookie sheet (flatten balls if you want a flatter cookie.) Bake at 350 degrees for 10 minutes.