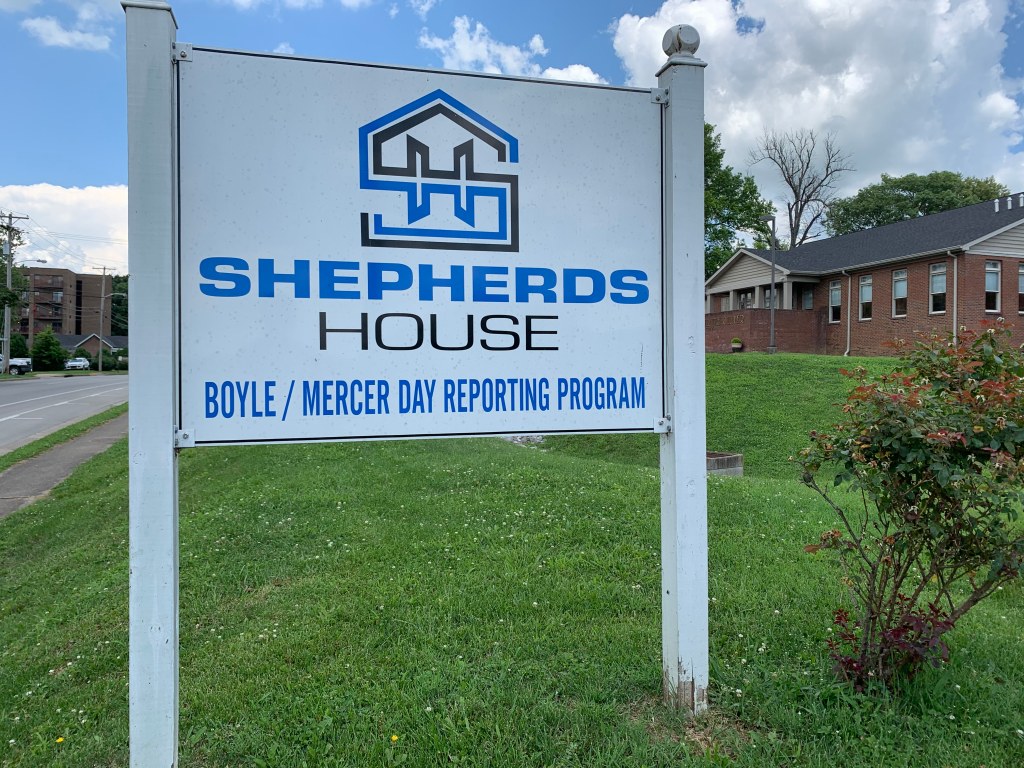 Roger Fox, director of community outreach for Shepherd’s House, has been involved with the ACLU in doing re-entry work, he says. He worked with them to create a resource guide for those who are leaving jail and re-entering society.

“They chose us … sent us an email and said they knew it was tough times, said they appreciated the re-entry work we’re doing,” Fox says.

Michael Aldridge, executive director of the ACLU, says, “One of the top priority areas for the ACLU of Kentucky is justice reform, with the goal of reducing incarceration rates in the state.”

The work, he says, is largely funded by the Chan Zuckerberg Initiative.

CZI is a foundation begun by Priscilla Chan and Mark Zuckerberg that strives to use technology to solve tough challenges. The foundation works on issues like preventing and eradicating disease, how to improve learning experiences for kids and reforming the criminal justice system.

Aldridge says, “We convened a series of conversations with organizations doing re-entry work in Kentucky …” and that became “an informal collaborative space” used to share resources and identify gaps. “They even developed the re-entry resource guide. From there, we selected organizations for support, striving for geographic diversity to have an impact in rural Kentucky, and balancing our distributions among both recovery and non-recovery facilities,”

He says the ACLU also prioritized organizations that are led by and/or serve people of color, women, immigrants, people with substance use disorder, mental illness and people with criminal convictions who experience homelessness.

Fox says “it’s huge” to be recognized by CZI. “Plus the ACLU, an organization that’s making a difference in re-entry.”

Aldridge says once an individual is released, they face a number of obstacles, from finding adequate housing to obtaining an ID, which have only been compounded by the pandemic.

“Access to these resources have become even more limited. CZI recognized this reality. They asked the ACLU-KY to identify groups in Kentucky providing services that assist folks released from prison or jail,” he says, and then they asked the ACLU of Kentucky to distribute funds to each of those groups to support that work.

“We were pleasantly surprised,” says Jerod Thomas, president and CEO of Shepherd’s House. He says it was not only a big deal because the money is incredibly useful now, during the crazy time of COVID-19, but due to who the organizations are.

“I’m never surprised with what Roger can do. His ability to get into the community is amazing to me,” Thomas says. “I’ve always been blown away by Boyle County, though. It’s a different world here, they just really take care of one another.”

Just recently, Kentucky Fresh Harvest out of Lincoln County donated $300 to the Shepherd’s House, for instance.

Thomas says Shepherd’s House was never set up as a profit model. “Our goal is to make payroll,” he says, and adds that it’s becoming more and more difficult. “Because we’ve lost our clients, predominantly in the jail programs where it’s been hardest hit.”

Aldridge says that was part of the aim. “The coronavirus heightened our calls to release inmates across the state, realizing that prisons and jails are ill-equipped to implement the necessary social-distancing measures to keep people safe,” he says.

Also, inmates have not been able to be moved into the Substance Abuse Programs (SAP) in jails due to restrictions from the coronavirus. Fox says he hopes transports will open back up soon, but it all comes down to the state making that decision.

“We have 40 SAP beds (in Boyle County Detention Center), and 16 are full today, because prisoners can’t be moved,” Thomas says.

“We’re feeling it in the IOP and sustained living (programs),” he says, about dealing with the health pandemic. “I hate to say it like this, but the overall ‘impending doom’ affects addicts twice as hard. They think the world is coming to an end anyway, so they’re accelerating the process. They feel there’s no jobs and we’re all going to be sick, so I’m going to get high …”

Fox says they have definitely felt it in their programs. “Court is opening back up, but at a limited capacity, I think 33%, and there’s so many people on the docket at a time, we’re playing catch-up from things held over from March and April.”

But, Fox says everybody associated has been doing a great job of working together. He says there’s a “great line of communication” between the county attorneys and the public defender’s office.

“We’re always conferencing about these clients and how to best serve them,” he says. “And even when people do fall out of compliance, people have been understanding and sent them back to us,” which has been extremely helpful during the added stressors from COVID-19.

“This pandemic is changing the world, and how we deliver services, interact with our clients,” Fox says. Clients have even begun to come to the Shepherd’s House to go to court “here through video,” he says.

“And (Boyle) Circuit Court has opened up to us, and Judge (Darren) Peckler (circuit judge for the 50th Judicial Circuit in Boyle and Mercer counties ) is sending people to us — we’re so grateful for that. We hope that relationship will continue after COVID,” Fox says.

Fox says the $12,500 from the ACLU is unrestricted funds, which allows them to put some towards payroll in order to “stay afloat through all of this.”

“We are thankful to the generosity of the Chan Zuckerberg Initiative, which recognized a new obstacle in the ongoing work for justice reform in Kentucky, and provided funds to meet the challenge,” Aldridge says. “We are also proud to support the good work being done by so many organizations throughout the state who are making a significant difference in the lives of the most vulnerable Kentuckians.”

The annual Run for Recovery 5K,  the biggest fundraising event for the Shepherd’s House, will be a virtual platform this year due to the COVID-19 pandemic. The race will be held over July 21-25, costs $35 and includes a special pandemic-themed T-shirt. Participants can pick when they run and where by registering for the race at R4Rky.com.