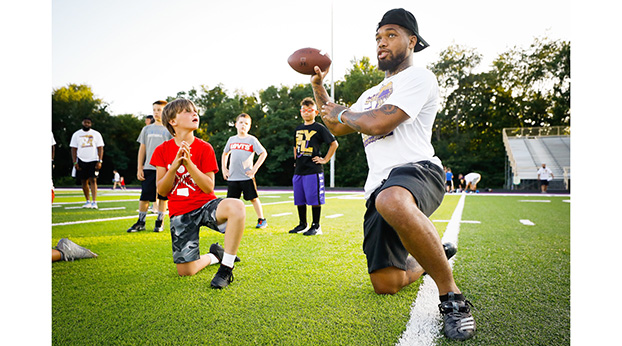 Not only did Lynn Bowden return from Las Vegas to conduct a youth football camp in Somerset Saturday night, but he apparently would like to do it again.

“When he was leaving, he asked, ‘Are you going to do another camp next year? I would like to come back,’” said Bart Williams, director of the Somerset Youth Football League that hosted the camp at Somerset High School.

Obviously, the camp organizers would love to have him back.

“It was just awesome. I have been part of the program here for 30 years. We have had a lot of camps, but none with a celebrity like this. Most of the time it has been the high school coach and his staff working the camp,” Williams said.

Bowden even brought junior linebacker Marquez Bembry and senior receiver Josh Ali to Somerset with him.

“We had no idea they were coming with him. They all interacted with the kids and we could not have asked for anything better. They were awesome,” Williams said. “We were spread out all over the field trying to social distance as much as we could. They all walked around and participated in each of the stations we had for the players.”

Somerset senior quarterback Kiaya Sheron, a Kentucky verbal commit, was at the camp, too. He had been on vacation with his family but they came back early so he could be there.

“He actually threw some passes to Lynn,” Williams said. “It was really neat to see. But Lynn and those UK guys were all so genuine and down to earth. Our young kids really loved them.”

Maybe that’s because they all knew plenty about Bowden because of the 2019 season he had for UK when he moved from receiver to quarterback midway of the season. He was the 2019 Paul Hornung Award winner as the nation’s most versatile offensive player.

He led the Southeastern Conference and ranked fifth nationally in all-purpose yards and ranked second nationally in rushing yards per carry at 7.9 yards per rush. He ran for 1,369 yards in eight games, the best mark in the SEC and 11th best nationally. He joined Randall Cobb as the only UK players with 1,000 career receiving, rushing and kickoff return yards.

Yet on Saturday night Bowden, a third-round draft pick of the Las Vegas Raiders, was doing an obstacle course with elementary students.

“Kids were running pass routes and Lynn and Ali worked with them on running routes,” Williams said. “Lynn was actually throwing passes to the kids.

“We had a 40-yard dash station and Lynn challenged them all to a race. We spread them out and Lynn started about five yards behind. He caught up pretty quick with most kids but we had an eighth-grade kid running and he’s not slow. Lynn just beat him by a couple of yards and said it was tougher than he thought it would be.”

“Lynn just adds excitement to football here. I know basketball is a major deal in Kentucky but we have a lot of fans here who follow football,” Lucas, who led Somerset to the 2019 Class AA state title, said. “To see somebody who has done what he’s done at that level is a huge boost to football here.”

Williams set Bowden and his former UK teammates set a terrific example for the youth players at the camp.

“They were all very, very personable and great with the kids,” Williams said. “It was just refreshing to see young men in their early 20’s be as polite and genuine as those three were.

“You might think somebody in Lynn’s shoes stepping into a pro career could be kind of all full of himself. He was not like that. If you did not know, you would not have known he was a star.

“He spoke to the kids at the end of the camp and told them if not for football he would not be standing here with you today. He said, ‘If I wanted to play football, I had to get education.’ It was good for the kids to hear that because he was so genuine it really impressed them.”

Kentucky and Indiana a natural rivalry that needs to…