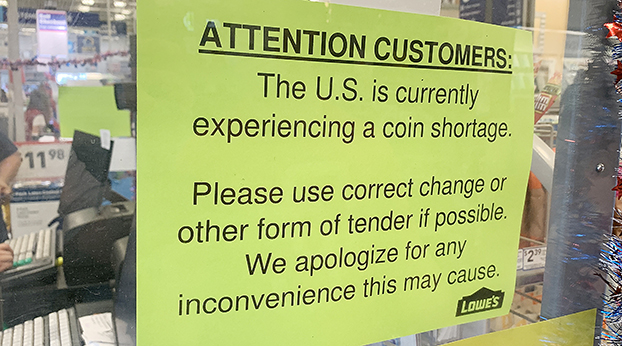 Some local stores, including Lowe's, are encouraging customers to use correct change during the national coin shortage. (Jeff Moreland photo)

Those who visited area retailers over the weekend may have noticed signs announcing a nationwide coin shortage.

“Attention customers: The U.S. is currently experiencing a coin shortage. Please use correct change or other forms of tender if possible,” many of the signs read.
Kroger stores nationwide are set to halt the distribution of coins for cash purchases at cashier registers. The remainders from cash transactions will be applied to customers’ loyalty cards and automatically used on their next purchase.

The United States Federal Reserve is warning Americans that the coin shortage is a real issue.

The shortage is being attributed to the slowdown in the American economy due to the COVID-19 pandemic.

“The COVID‐19 pandemic has significantly disrupted the supply chain and normal circulation patterns for U.S. coin,” a statement from the U.S. Federal Reserve said. “In the past few months, coin deposits from depository institutions to the Federal Reserve have declined significantly and the U.S. Mint’s production of coins also decreased due to measures put in place to protect its employees.”

Brandon Drake, senior vice president and head of sales and service for Farmers National Bank in Danville, said the coin shortage isn’t from increased demand, but more so from the lack of recycling coins into circulation.

“Places that accepted a lot of coin for recycling, people weren’t doing that like they normally do,” Drake said. “The input is down, so recycling it back into banks is down as well. That’s the reason why we have a coin shortage. It’s not an increase in demand, but more so a lesser supply.”

The shortage can also be attributed to many banks limiting in-person services earlier this year due to the pandemic and temporarily eliminating services such as coin rolling.

Starting in June, the Federal Reserve began temporarily allocating set amounts of pennies, nickels, dimes and quarters to banks. The limits given to each institution will be reviewed and changed as supply increases.

Drake said the Federal Reserve is using averages from last year and then formulating the new amount in ratio to last year’s averages.

“Everyone is kind of treated equally,” Drake said. “The bigger banks, maybe commercial banks in metropolitan areas are going to get more coin than maybe community banks that use less coin. They’re not picking on these banks, they’re just saying since you use less, we’re giving you less.”

Drake said Farmers National Bank has been no exception as each branch has received less coin than they are typically accustomed to receiving. He added that they have not stopped providing coins for businesses but are having to adjust to a lower number of coins on hand which means giving out smaller amounts to businesses.

“We always give coin but we have to limit it at times,” Drake said. “Some businesses were used to getting a box of pennies a day or two boxes of pennies to last them for several days or a week. Now we may give them $5 or $10 worth of pennies which will last them through their business day or maybe the next day. We’re not leaving any of our customers without coin but we’re doing our best to make sure there is enough for everyone.”

Overall, Drake said he doesn’t feel like the coin shortage has been a significant issue locally to this point.

“From what I can tell, it hasn’t been a major issue,” Drake said. “We tried to make sure all our customers knew about this when we found out about it.”

While experts believe this doesn’t figure to be a long-term issue moving forward as the economy reopens and more currency goes into circulation, there are some short-term implications as area retailers are asking for people to pay at the register with exact change or with a debit/credit card.

There are different ways that people can help during the coin shortage. One of the most obvious is to cash in extra change at a bank or through a coin-counting machine. Most banks will provide coin exchanges for free if a person is a customer at that bank or will do so for a generally small fee.

“If you have one of those big buckets of change, we’re glad to have customers come in to cash those in or people can take those to whatever bank they use,” Drake said. “… We will get that coin back into the system and recycle it as we ship that coin off.”

“Methods like Google Pay, Apple Pay, Samsung Pay, or using your debit card help,” Drake said. “Paying like this limits the amount of change that has to go back to customers or the less change that businesses have to have.”