‘What we face is very, very real,’ Beshear says of 576 new cases 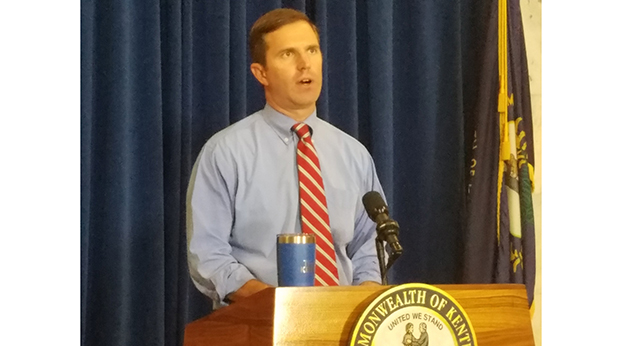 Gov. Andy Besher reported 576 new cases of the coronavirus on Tuesday and reiterated the importance of wearing a mask in public. (Kentucky Today/Tom Latek)

Kentucky had nearly a record number of new cases of the coronavirus on Tuesday, according to figures released by Gov. Andy Beshear.

“We are reporting 576 new cases of COVID-19,” Beshear said. “Aside from the day that we tested an entire prison, this would be the highest, and significantly more than we have ever reported.”

The highest single day total of new cases in Kentucky was 625, which took place on May 5. Nearly half of them, or 309, were due to an outbreak at the Green River Correctional Facility in Muhlenberg County. Tuesday’s 576 new cases topped the previous second place total by over 100, which was 452 last Saturday, which edged out the previous day’s total of 426.

Kentucky’s pandemic total has now reached at least 20,223, since the first case was reported on March 6.

“If 400 made you gulp, 576 ought to create a knot in your stomach,” he said. “Because what we face is very, very real. What we do now is going to determine whether we can push that back down. Or whether we will suffer more cases and more deaths. Don’t let anybody fool you, the more cases we have, the more death follows.”

The governor also announced six additional deaths, making it 635 Kentuckians who have lost their lives to the coronavirus. The latest victims were from Carter, Casey, Fayette, Floyd, Ohio and Shelby counties.

“We are at war with this virus,” he said. “It threatens our lives, our livelihoods, and our very way of life. In the midst of this great challenge, it is time to stop the silliness and the games. To put aside personal ambitions or grievances. It’s time to live up to our morals and to our faith.”

The governor also issued a call for everyone to wear a mask, which he has made mandatory in public under both an executive order and an administrative regulation.

“If you don’t, if you’re too proud or whatever the reason is, then our economy will not stay open, we will lose lives, and it’s very doubtful that we’ll be able to kids back into school.”

Beshear said the report indicates that Kentucky is certainly in a time of escalating cases.

“Our actions over these next 10 days to 14 days, really through the next 30 days that we have put this face covering requirement out, are going to determine if we continue to be a leader, if we continue to be one of the best states in the country, or if we go the route of Arizona, which is now requesting giant freezer trucks because their morgues are being overrun. It depends on our willingness to come together and do the right thing, and today should be just one more wake-up call that we’ve got to do it now.”

The governor said he plans to hold another briefing, Thursday at 4 p. m. EDT.